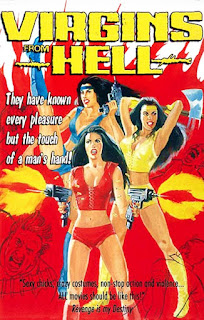 ... aka: 地獄のバージン／女囚の地下帝国
... aka: Maiden's Revenge
... aka: Pertarungan Perawan di Sarang Sindikat (Battle of the Virgins in the Syndicate's Nest)
... aka: Virgin in the Syndicate Web, A
... aka: Virgins from Hell
... aka: Virgins of Hell
... aka: Virgins of Hell - Furien der Apocalypse (Furies of the Apocalypse)
... aka: Virgins of Hell - Sie wollen überleben (They Want to Survive)
Directed by:
Ackyl Anwari
Don't you just love it when a film's opening scene is so in tune with you and your tastes that you know right from the opening few frames you're just gonna love it? Shady gangster Maurice (Hendra Cipta) is gambling away in a smoky casino when his good luck charm / arm candy Sheila (Enny Beatrice) reminds him that they have a date. After retreating to an upstairs bedroom, the girl soon reveals that she's tricked him (Sheila has been posing as - in her own words - "a filthy whore" to gain access) and he's now in for the ass kicking of his life. Sure, she takes a few punches herself and even has a chair broken over her, but she's otherwise easily able to slap, hit and karate kick him into submission, hangs from a plastic ceiling lamp and gets him in a thigh hold, kicks his gun from his hand and then shoots him to death. Oh, and did I mention she's wearing a red headband, red vinyl crop top, frayed red vinyl hot pants and knee-high red vinyl boots during all this? Well, now you know, and now you also know why this was speaking my language. After dispatching the creep ("You son of a bitch! See ya later sucker!"), Sheila then opens the window and signals for her girls to raid the place. Her girls? Yes, Sheila is not only a bad ass chick but she also happens to front a bad ass all-female motorcycle gang who share their leader's affinity for hot pants, headbands, metal trinkets, copious amount of hair spray and horribly staged fight scenes. Hooray!
The biker chicks invade the gambling den, first by driving their red jeep with a skull painted on the hood through the wall, and proceed to clear out the place by punching, stabbing, machine gunning and sending guys through windows. They take all the cash they can grab and make a hasty retreat. A spy informs the super-sadistic owner, Mr. Tiger (Dicky Zulkarnaen), of what's occurred, so he orders his men to find and execute all of the biker chicks and dump their bodies into the river. "You know the spot!"

As for the reason the girls have it out for Mr. Tiger and his men to begin with, well, it basically stems from a property dispute. When Sheila's parents refused to sell their land to him, he had them killed and simply took their home (actually a CASTLE) and land. Now Sheila and her sister Karen (Yenny Farida), who both witnessed the crime, are out for revenge. The girls they've recruited to help out have been promised that they'll get their cut after they help to take out Mr. Tiger, who is using the property for his drug smuggling operation. In his underground lair, kidnapped doctors are being forced to work on drugs. If they fail, they're executed. Young medical student Larry (Harry Capri) is next in line, but does he have the skills to help Tiger "take over the worldwide aphrodisiac market?" Why yes. Yes he does.
After a change of wardrobe (don't fret, the tattered, multi-colored new streetwalker outfits are still outstanding), the ladies raid the castle compound, which results in a hilarious machine gun battle filled with staged motorcycle stunts (including a levitating bike on a wire getting blown up) and all kinds of explosions. The guards retreat, the girls get by the entrance, a trap door opens and half of them fall into an underground cavern. The others who haven't already been killed are then rounded up and everyone is stuck in a large prison cell in a cave... and then this thing suddenly becomes the equivalent of a women-in-prison torture flick with all of the expected (and plenty of not so expected!) trappings.

When they aren't being tortured, sexually assaulted and killed, the women are forced to do manual labor, like wheeling around huge carts like donkeys and climbing trees to harvest coconuts (!) A captive named Janet is given the drug and then raped by Tiger's "business partner" Sam (August Melasz). Another poor girl (a virgin no less) stabs one of her attackers (S. Parya) in the crotch with a knife, but still gets gang raped and hangs herself as a result. There's also plenty of torture of the non-sexual nature, including lots of beatings, whippings and getting sliced up by a barbed wire "swing," strapped to a spit and roasted over an open fire, tied up in a sack with a rabid rodent and much more. On the plus side, the cave prison comes with a large, luxurious swimming hole for the women to lounge around in, so it's not all bad.

There's also plenty of girl drama, which leads to countless bicker sessions and cat fights. Sheila, Karen and Vicky (Leily Sagita) attempt to escape into the jungle, but Karen and Vicky (who makes the mistake of trying to hide in a leech-filled swamp) are apprehended. Sheila ends up getting washed downstream and is injured during a wrestling match with an alligator, which ends with her ripping out its eyeball with her bare hands! Thankfully, Sheila stumbles upon an old mystic who heals her with traditional medicine.
Meanwhile, Lisa (Ratna Debby Ardi) and her pal Julie (Yetty Loren) sell out the other girls and are promoted as guards for their efforts. They're forced to throw Mr. Tiger an 80s synth private dance party wearing sheer nighties, which ends with him handcuffing them together, pulling their hair, slapping them around, whipping them and basically terrifying the shit out of both of them with his extremely bizarre behavior! For an encore, he force feeds them wine and tries to drown them in a bathtub! While he's busy with them, Tiger's tattooed female guard, Dutch, takes advantage of Karen while she's asleep and licks her cleavage and a bloody wound on her leg (!!) before Karen wakes up screaming "Get off me, you lezbo!"
Two others also escape the compound. Larry kills a bunch of guards (including blowing one up and causing the other to have a full body meltdown complete with blood-bursting boils!), before being seriously wounded himself. With Sheila now gone, Dina (Nina Anwar) is forced to temporarily take the reigns. Feigning injury using rat blood, she defeats several guards and eventually locates an unconscious Larry. After she's caught molesting (!!) the nearly-dead student by Sheila, her new mystic buddy heals Larry's wound by sticking a snake in his bloody wound to retrieve the bullet (!!!) Sheila, Dina and Larry then team up to raid the camp and rescue the remaining captive girls.

This is one of those films that's basically impossible to rate as it straddles the line between SBIG and being an intentional trash film that has no real aspirations aside from being action-packed brainless entertainment. (I'm so confused right now I'm just going with the former rating). Say what you will about how some shots are clearly out of focus, how some of the action scenes are "enhanced" by speeding up the film and the ridiculousness of the entire plot, there's nary a dull moment here. It's loaded with violence, fighting, action, stunts and gore (including some serious blood-spurting) and also boasts some very decent pyro fx and explosions. There's also a memorable, lip-licking (literally!) camp performance from a heavily-made-up Zulkarnaen as the main bad guy, who also has some fantastic wardrobe selections. Perhaps the most peculiar thing of all is that despite being filled to the rafters with various sleazy goings-on, this somehow does the impossible by having no nudity whatsoever. Not that this film really needs it!

You never know just where some of these things might pop up on home video. I found only two early releases: a 1987 Japanese VHS that roughly translates to "Virgin of Hell: Underground Empire of Female Visitors" by Mount Light Home Video / Sony Exc!t!ng and a 1988 German release (dubbed into German) on the IVE label. Aside from some ancient Asian VCD releases, this title sat pretty much dormant until 2006 when it made its official U.S. debut thanks to Mondo Macabro. In Germany, they also received a DVD release in 2006 on the Retrofilm label, which comes with Indonesian, English and German audio tracks.
SBIG
Posted by The Bloody Pit of Horror at 6:25 PM No comments: