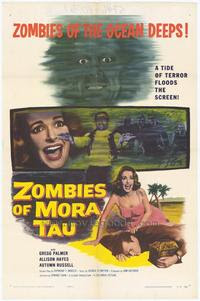 In the darkness of an ancient world -- on a shore that time has forgotten -- there is a twilight between life and death. Here dwell those nameless creatures who are condemned to prowl the land eternally - The Walking Dead. And so begins one of the earliest zombie flicks we'll be covering on this blog. Nope, these aren't zombies who rise up from cemeteries, eat people and go down with a shot to the head. They're also not like the voodoo-entranced, docile dead of the 30s and 40s either. These guys, though technically zombies, are more like phantom figures. They look pretty much human aside from some strategically placed seaweed and their sole purpose is to guard a cache of diamonds that's hidden somewhere on the ocean floor. The zombies are actually the ten men who died when their ship sank sixty years earlier and now reside in open caskets in a nearby mausoleum. Anyone who goes looking for the treasure face death at the hands of the seaweed-covered undead sailors.
.
Despite their presence, wealthy tycoon George Harrison (Joel Ashley) organizes a trip to Africa to search for the diamonds. He brings along expert diver Jeff Clark (Gregg Palmer, who'd just faced off against another underwater fiend in the previous year's THE CREATURE WALKS AMONG US), scientist Dr. Jonathan Eggert (Morris Arkrum) and a small crew. He also drags along his sarcastic, sexpot wife Mona (ATTACK OF THE 50-FOOT WOMAN's Allison Hayes) to lounge around on the ship in a bikini and make bitchy comments. Everyone stays at the plantation home of elderly widow Mrs. Peters (Marjorie Eaton), who knows all about the zombie legend since her husband is one of them. Also thrown into the mix is Grandma Peters' blonde granddaughter Jan (Autumn Russell), who clearly picked the wrong time for a visit.
.
Talky, slow, darkly photographed, almost entirely devoid of chills and thrills and all-around silly, this isn't what I'd consider a must-see, but it's a mildly enjoyable 70-minute curio if you're interested in the development of the zombie film. The subgenre as we know it today, as well as the characteristics we usually associate with zombies, are mostly derived from NIGHT OF THE LIVING DEAD (1968). Interestingly though, the zombies in Night and the zombies here do at least share a couple of similarities; namely their fear of fire and, though it's never shown or explained how they're able to do it here, their ability to turn humans into zombies. Then again, if you want to get technical about it, the underwater scenes are unconvincing, the generic stock music score is a bore, the film basically just peters out by the end and most of the performances are flat, though Hayes does try to her best to liven things up a little bit. Well, while she still has a pulse, at least.
.
Sony Pictures released this as part of the Sam Katzman Collection; a two disc set that also includes the Katzman productions CREATURE WITH THE ATOM BRAIN (1955), THE WEREWOLF (1956) and THE GIANT CLAW (1957).
.
★★
Posted by The Bloody Pit of Horror at 1:14 PM 2 comments: