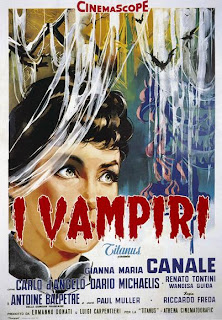 
First released in the U.S. as The Devil's Commandment (in a reduced English-dubbed form), I vampiri was the first horror film to be made in Italy since the silent era and has been given its due credit in the history books as the film to help usher in a new wave of Italian gothic horror films. It's also noteworthy as the first genre film of both Riccardo Freda and Mario Bava. Despite walking off the set before completion, Freda received sole director credit for this one. History would repeat itself on Freda's follow-up, CALTIKI, THE IMMORTAL MONSTER (1959), Italy's second post-war horror film. It was Mr. Bava who ended up stepping in and completing both films, though he only received credit for the cinematography. Regardless, both Freda and Bava would go on to make their marks in the subgenre with films that rivaled and sometimes even eclipsed the popular Gothic horror efforts being produced in the UK (from Hammer Studios) and the US (namely Roger Corman's Edgar Allan Poe series). Freda made THE HORRIBLE DR. HICHCOCK (1962), THE GHOST (1963) and several others and the multi-talented Bava - who's rightfully more famous than Freda - had even greater moments with such films as BLACK SUNDAY (1960) and THE WHIP AND THE BODY (1963).

Essentially a spin on the Countess Elisabeth Bathory legend, I vampiri sets its action in France. A female corpse showing no notable signs of injury and completely drained of blood is fished out of a lake. The victim turns out to be the fourth in a period of sixth months. All have been young females with the same blood type, forensics uncovers each victim have small, syringe-like puncture wounds on their bodies and the local newspapers are full of headlines about a vampire killer on the loose. Seeing as how the police - led by Inspector Chantal (Carlo D'Angelo) - don't seem to have a clue, famous reporter Pierre Lantin (Dario Michaelis) decides to step in and investigate. One evening, while left alone in her theatre, a dancer is accosted by a tall, pale man, who chloroforms and then kidnaps her. The assailant - Joseph Signoret (genre star Paul Muller in an early role) - turns out to be a pathetic junkie so desperate for a fix he's at the whim of an enraptured mad doctor and his assistant, who are experimenting in youth restoration. Schoolgirl Lorette (Wandisa Guida), who seems to have eyes for Pierre and vice versa, turns up missing next after agreeing to deliver a letter to an apartment for a blind man.

Clues lead our hero to the extravagant castle home of the wealthy and mysterious du Grand clan. Aged duchess Margherita barely ever shows her face in public and never without wearing a veil. Her striking niece Giselle (Gianna Maria Canale) is a bit more social and outgoing, but there's still something a bit off about her. Still, nearly every man in the area lusts after her... except for the one she happens to be in love with. Years earlier, Margherita fell in love with Pierre's father; a love that wasn't reciprocated. Now Giselle faces a similar fate. Regardless of her youth, beauty and wealth, Pierre just isn't all that interested in her. His photographer buddy Ronald, however, is, and disappears inside the castle walls after sneaking inside Giselle's bedroom. Because of his obsession with uncovering the identity of the murderer, Pierre is thrown off the case by his boss, but continues to keep tabs on the du Grand family.

While the storyline is rather predictable, this is quite well-done if you're in the mood for a tame, bloodless Gothic horror with subdued horror elements. The actors (especially Canale) are all pretty good, the writing (particularly in regards to the dialogue and characters) is better than usual, it's entertaining and the whole thing looks really fantastic: no surprise with Bava as the cinematographer. One area this particularly shines in is the set / art direction (courtesy of Beni Montresor and Piero Donati). The eye-catching interiors of the castle are a really superb Gothic design. I'll usually find the occasional striking image scanning through films looking for screen caps. This movie is chock full of those.

The widescreen version I watched (released by Image Entertainment in 2001) was in Italian with English subtitles. I'd recommend avoiding the cut English-language version if possible (especially the cropped ones which don't show off the sets to full effect). Some version are cut down by as much as 20 minutes. Freda appears unbilled as an autopsy doctor.