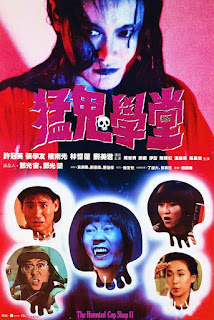 
This immediate follow-up to THE HAUNTED COP SHOP (1987) went into production after the first became a modest hit in Asia. Like its predecessor, it also did pretty well in theaters (earning just 1.5 million less than the first) but there were still no further films in this particular series. That's not necessarily a bad thing if I'm being perfectly honest. Abiding by the smart strategy “Don't change a winning team,” this was made by the same director, writers (Lau and Kar-Wai Wong) and producers (Alan Tang and Golden Harvest), brings back all of the original film's main actors (some reprising their originals and others in different parts) and sticks by the same bumbling policemen vs. ghostly vampires horror-comedy template. 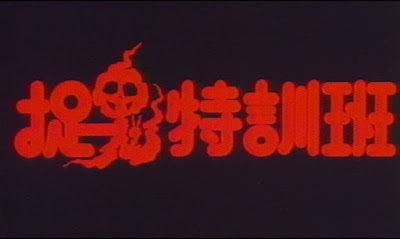 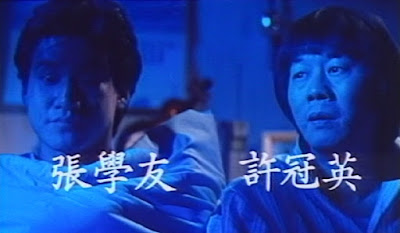 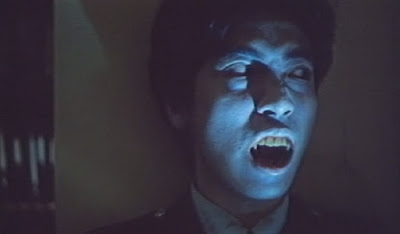 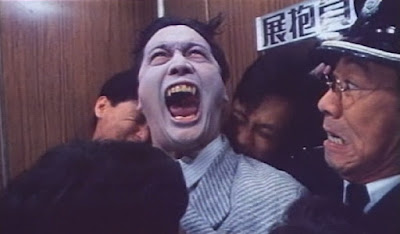 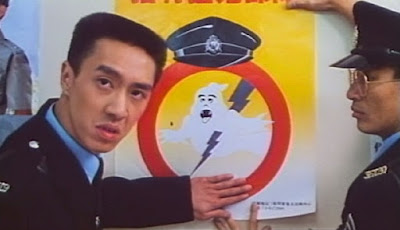 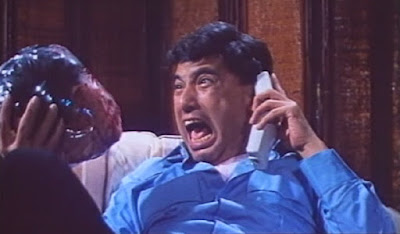 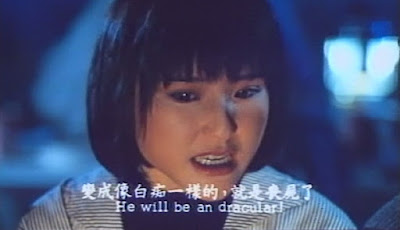 After a nightmare / flashback sequence that utilizes footage from the first film, this throws us right into the action with a long action-horror-comedy-horror set piece in a high rise office building. While a meeting of professionals is going on about what to do with a recent outbreak in vampires / ghosts (should they be eliminated or treated like normal citizens are have to pay taxes?), a bloodsucker sneaks into the building and causes another outbreak. Supt. Shun (Fung Wu) of the Hong Kong Police Department puts his most experienced officers; Kam Mark (Jacky Cheung) and Man Chiu (Ricky Hui), in charge of taking down the vampires but all anyone really does is try to run away from them. Kam Mark skates around the office when buckets get stuck on his feet while Man Chiu is forced into having sex with a horny female vampire (which is captured by security cameras and later accidentally broadcast on TV) to keep her from biting him. 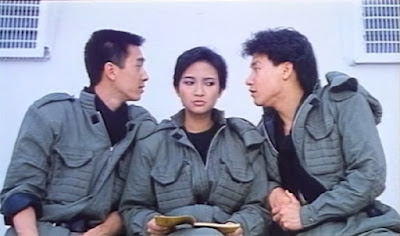 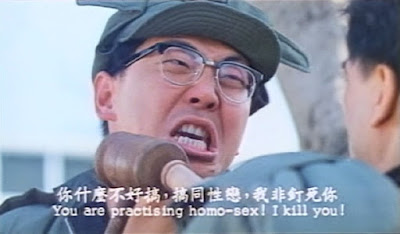 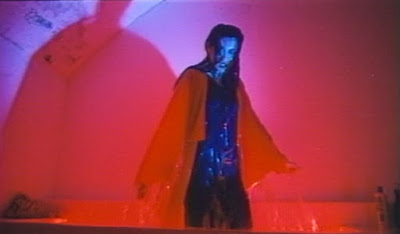 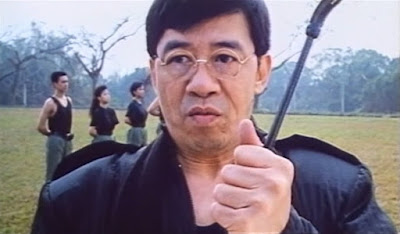 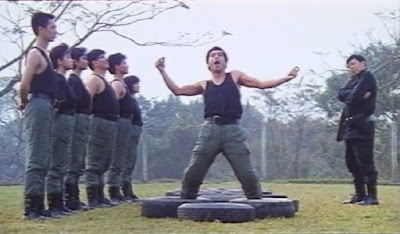 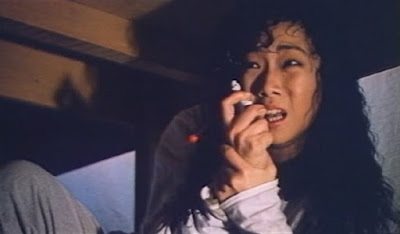 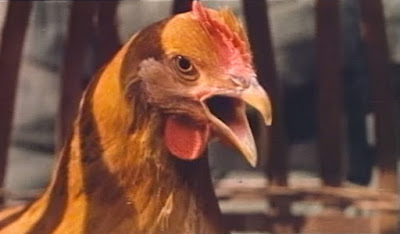 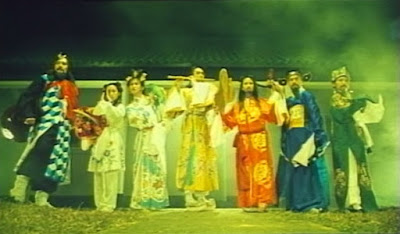 Seeing how their current techniques haven't been all that effective, the mayor has Shun start a special new “Ghost Buster Team” of the force specializing in snuffing out the supernatural. Gee, that sounds awfully familiar. The new unit's full name is the Hong Kong Royal Police Monster & Special Crime Research and Action Unit, or the H.K.P.C.D.U.K.L.M.E. for short. Don't ask how that works out but I think it's supposed to be funny. Kam Mark and Man Chiu are forced to assist Shun like it or not. The ambitious Little Bald (Chan Fai-Hung) joins only because he thinks he'll be getting a raise and promotion if he does. Over-the-hill wannabe ladies man Romeo (James Yi Lui) asks for a change of department after discovering the severed head of a serial killer's victim inside a basketball but insists big breasted Hung Dai Dai aka Big Mimi (Kitty Chan) be reassigned, too. Sick of helping a shrink talk suicides off of jumping off rooftops, Little Witch (Prudence Liew) thinks she can do better. Miss Bad Luck (Sandy Lam) causes injury and misfortune to anyone so much as in the same room with her so she's thrown into the mix. And, finally, Lazy Bone (Billy Lau), twin brother of one of the first film's victims, joins up looking for revenge. 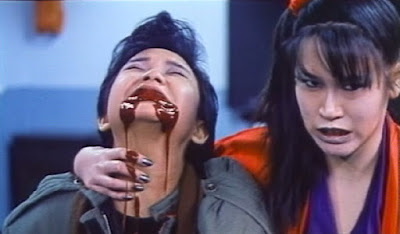 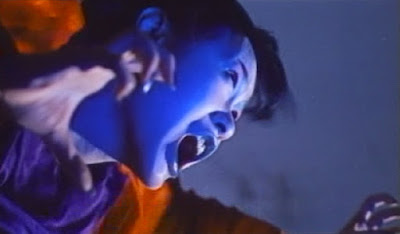 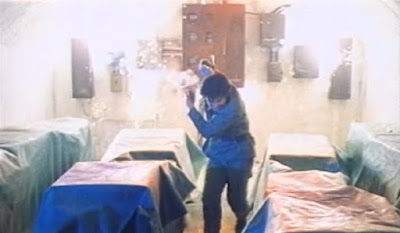 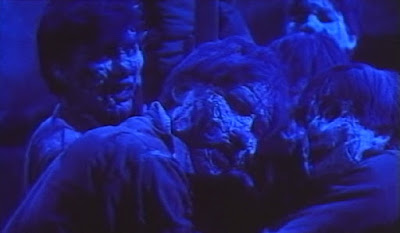 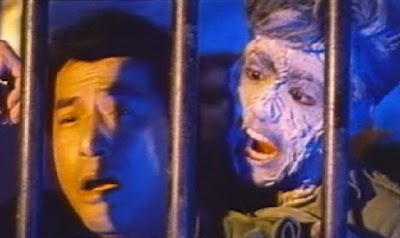 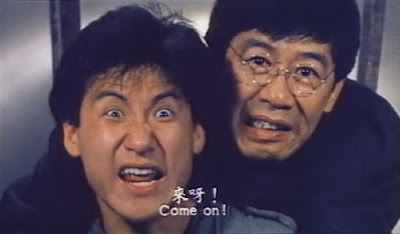 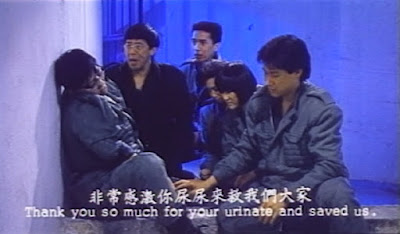 Around the campfire, Little Witch pulls out a book her grandfather gave her that explains the different type of vampires one can come across. What kind of vampire one becomes depends on how frightened they are prior to being bitten. There's even a type of werewolf vampire (no fur or claws, just wolf-like behavior and one fang instead of two) that only lusts for blood on a full moon but is normal the rest of the time. Little does anyone realize, but Man Chiu actually suffers from the latter condition after getting bitten during his earlier tryst. The gang do an obstacle course that includes running through tires, scaling a wall and trying to stake a target white it spins. Other than that, they spend nearly an entire day trying to charm a chicken so it'll lay eggs. After much goofing off, everyone eventually has to deal with two female vampires; one dressed in red and the other in white, who conveniently live near the training groups in some underground lair. 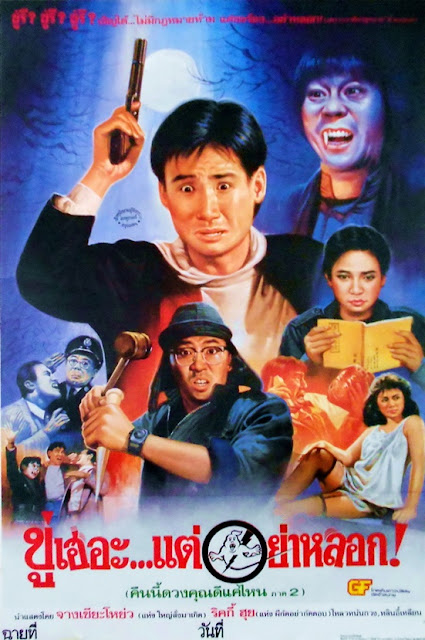 Not quite up to the middling heights of the previous entry, this comes off like some unholy mix of Ghostbusters, Police Academy and Mr. Vampire. Don't get me wrong, this movie really does try hard, it's just that most of the time the attempts at humor aren't the least bit clever (though a dig at the hopping vampire genre made me laugh) and this has even less horror and action than the first. Even worse, the mostly unlikable characters talk a mile a minute, never seem to shut up and are constantly mugging and looking directly at the camera making goofy faces. There's a pretty good scene in a bathroom where one of the girls tries to elude a vampire that rises from a tub, and a decent final twenty minutes or so of action in the vampire lair when an army of zombies show up but that's about all this has to offer.