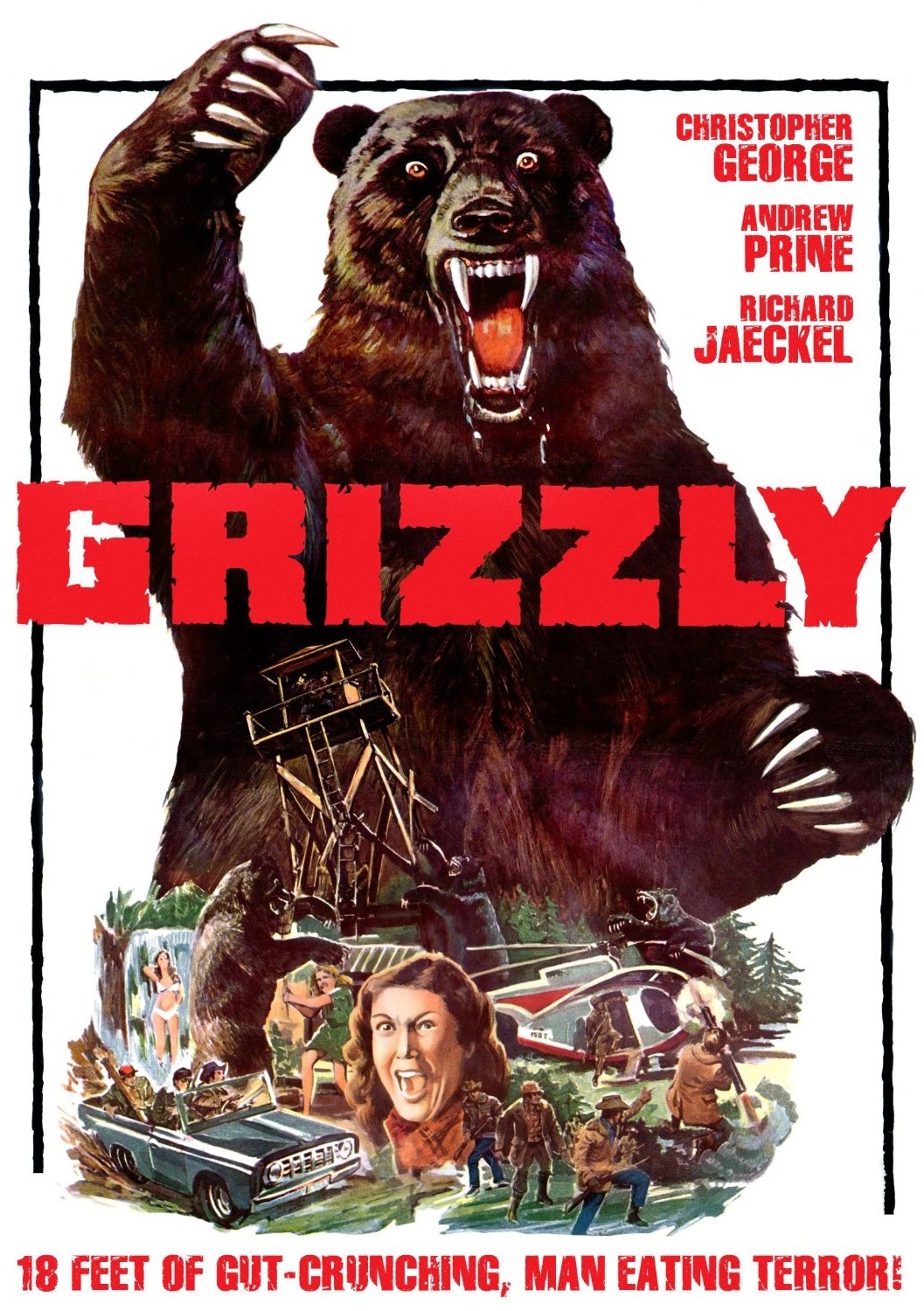 
A favorite of drive-in movie patrons of the 70s became a favorite of cable viewers in the 80s and 90s. I remember this one being on TBS all of the time in my childhood. I watched DAY OF THE ANIMALS, Squirm, Rattlers and tons of others on there as a kid, but somehow managed to avoid this one until here recently. Basically just a derivative, formulaic rip-off of Jaws with a big bear instead of a big shark (it was actually even advertised at one point as being "Jaws with claws") with almost identical characters, pacing and plot developments. The action takes place at a popular summer camp in Georgia, where a fifteen-foot-tall, blood-thirsty Grizzly is on the prowl; hunting down, mauling and eating human victims. Two young women having a cookout are first to go in some surprisingly bloody scenes (one even has her arm whacked off), followed by a female swimmer under a waterfall, a woman in a tent, a ranger in an observation tower and others. The body count is sufficiently high and the kill scenes are fairly well done. Local forest ranger Michael Kelly (Christopher George), naturalist Arthur Scott (Richard Jaeckel) and gruff, experienced helicopter pilot Don Stober (Andrew Prine) team up in an effort to hunt down and kill the beast. All three of the lead characters are obviously cloned from Jaws; developed and scripted in a way almost identical to the good-hearted small-town policeman played by Roy Scheider, the slightly arrogant young scientist played by Richard Dreyfuss and the salty, wise boat captain played by Robert Shaw. And the similarities don't stop there!

This one even has friction between Ranger Kelly, who wants to immediately close down the camp, and a greedy national park supervisor (Joe Dorsey), worried about getting a bad reputation and losing some money. Remind you any of the corrupt mayor played by Murray Hamilton? It also has a requisite (and utterly pointless) love interest for the lead character. Remember Lorraine Gary's useless role as Brody's wife in Jaws? This time it's Allison (Joan McCall), a "photographer" never once seen with a camera in her hand, and someone who serves no purpose in this film whatsoever. Once the action starts, she's asked to exit stage left and never again returns. What's funny is that Gary's husband was the producer of Jaws, while McCall's husband was the co-producer / writer of Grizzly. Makes you wonder if the producers insisted the writers expand on tiny, insignificant roles just so their unexceptional wives could take part. Instead of scenes of our heroes scouring the waters in a boat, we get scenes of our heroes scouring the woods in a helicopter. Instead of every day people doing some freelance shark hunting, we get every day camouflage-sporting yahoos with coon dogs and rifles heading out after the beast. A little boy on a raft is eaten by a shark. A little boy has his leg ripped off by a bear. I could actually keep on going here if I wanted (right down to the movie's final scenes), but you get the point. Interestingly, Susan Backlinie, who played the girl gobbled up by Jaws in that film's memorable opening sequence, also did some waterfall stunt work on Grizzly.

It's really not too awful; almost unintentionally bordering on camp at times. The cast (also including Girdler movie regular Charles Kissinger, Kermit Echols, Victoria Johnson and Sandra Dorsey) is OK, there are a few laughs and the outdoor locations are pleasing to the eye. The bear effects are also fairly well done. Only relying on some fake arms/claws, they use an actual Grizzly for the scenes and just shoot it from low angles, high angles and close-ups to give it the appearance of being larger than it actually is. It's a much better way to do these things than having a man in a bear suit running around. An over-reliance on heavy-breathing bear POV shots gets a little tiresome after awhile, though.

A sequel to this film actually went into production in 1983 and was mostly filmed (aside from special effects that were to be added in post), but the footage was seized for non-payment by the Hungarian government. Cannon Films later purchased the rights in 1987 with plans to complete it but that never happened due to the studio having financial problems. As a result, the film was never finished nor released. Only a workprint version currently exists. There was also another kill bear film that played on television under the title Grizzly 2 even though it was completely unrelated to this one.

The Liberty DVD (one to avoid) comes with no special features and is presented in cropped full screen with flat VHS-level picture quality. However, the film has also been released by Shriek Show in a wide-screen version with better picture / sound quality and tons of extras.