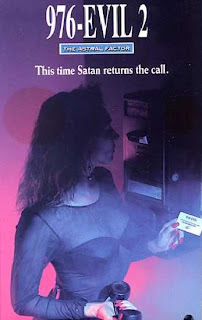 
Because he was reaching the height of his popularity in the late 80s, someone decided to give Robert "Freddy Krueger" Englund his first chance to direct a feature. The resulting film was 976-EVIL (1988); the middling, uneven tale of a sniveling nerd (played by FRIGHT NIGHT standout Stephen Geoffreys) who decides to get revenge on those who have mocked him using a demonic, wish-granting telephone service. Though it neither grained critical praise nor set the box office on fire (Englund wouldn't direct another feature - the dreadful KILLER PAD - until nearly two decades later), 976 made enough on video and cable TV to open the door for this sequel. Part II was deemed a terrible film upon release and I'd have pretty much agreed with that assessment back then. However, twenty+ years and having been subjected to what passes for a 'B' horror flick these days - you know, countless "movies" shot on digital video for a thousand bucks in the woods behind someone's house - in the meantime has somewhat changed my tune. By comparison to most current low budget flicks, 976-EVIL II really isn't so shabby. True, it's not great either, but it's at least shot on film, has a reasonable plot and production values, a good music score, mostly passable acting and some clever and genuinely amusing bits sprinkled throughout. 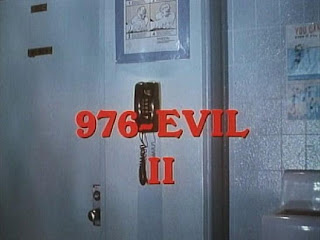 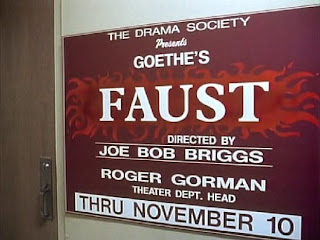 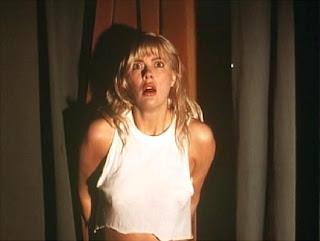 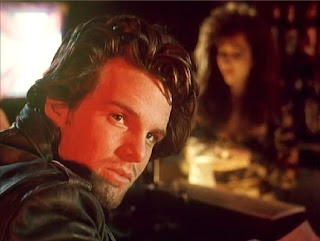 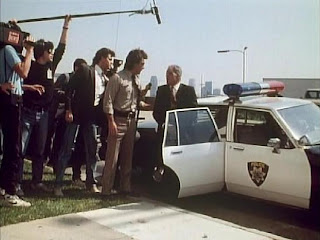 Aside from using the same Satanic 900-number "Horrorscope" plot line to tie it to the first film, Patrick O'Bryan also returns here to reprise his role as heroic,  leather-clad, motorcycle-riding bad boy Spike. Spike's arrival in the small, desert-set college town of Slate River mysteriously coincides with a Satanist serial killer's capture. The killer - smug, wisecracking college dean Stephen Grubeck (Rene Assa) - has already claimed five victims.... and he's not ready to stop now, despite being in custody. Fortunately for him, he's already discovered the titular phone line and has been frequently dialing the 976-EVIL digits. Now Grubeck has gained the ability to project himself out of his physical body and continue his killing spree in spirit form. In other words, while he remains behind bars under the not-so-watchful eyes of the police, he's still able to go about eliminating any witness that could conceivably help convict him of being The Slate River Killer. At least that's what he starts doing. Now completely over on the dark side, Grubeck also decides to use his new found abilities to haunt perky coed Robin Jamison (Debbie James). Robin, the goodhearted daughter of a psychiatrist (Rod McCary), used to work in Grubeck's office. There, he developed something of an unrequited crush on the green-eyed, blonde young beauty. Now Mr. G is free to pursue her when he isn't busy making toilets (and drunken janitors) explode. Somehow Robin has herself acquired ESP abilities, but it's a half-assed touch not adequately worked into the story line. 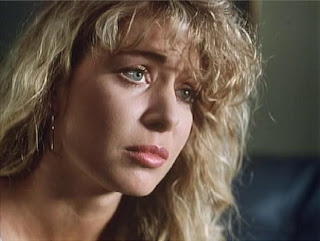 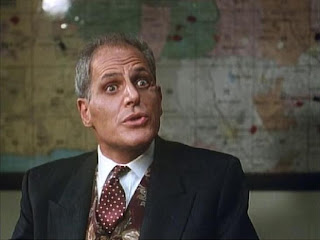 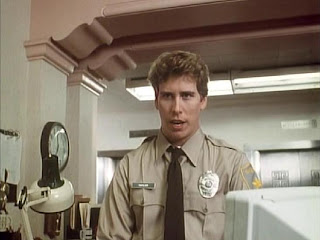 The set pieces and dated special effects are hit or miss, but this sequel does have its merits. For starters, it's briskly paced and generally entertaining. Sure, you'll groan at some lame gags and poor dialogue along the way, but there's just enough action, blood, car chases, car crashes, explosions, stunts, variable visual fx and in-jokes (like a sign for a stage production of "Faust" directed by Joe Bob Briggs for theater department head "Roger Gorman") to keep you watching. The best sequence is a highly memorable bit where one of Robin's friends (Leslie Ryan) gets sucked into a black-and-white public domain movie world crossing IT'S A WONDERFUL LIFE with NIGHT OF THE LIVING DEAD! The low point? No doubt Spike having to fend off ghostly attacks from the spray nozzle on a kitchen sink, flying frozen pizzas, animated machine guns and a cackling, talking stuffed wild boar head (?!) Chuck Cirino contributes some great music as he usually does in these things, particularly the opening and closing credits track, and the casting is also a plus. Though saddled with numerous eye-roll-inducing one-liners, Assa is fun to watch as he channels his inner Vincent Price in a black-humored portrayal of a ghoulish killer who comes down with quite the nasty skin condition from using his hell-sent powers so frequently. Newcomer James (a 1990 Miss America finalist has gone on to become an 'infomercial queen' in recent years) is pretty appealing in the female lead and most of the supporting cast do fair work. 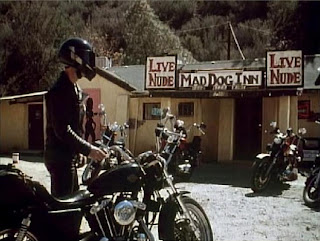 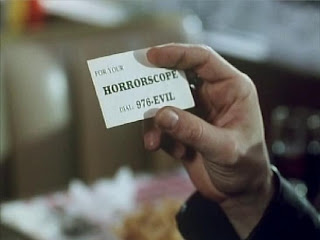 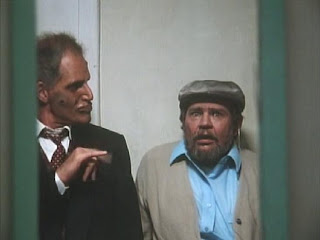 Karen Mayo-Chandler, who'd previously appeared in a larger role in Wynorski's hilarious HARD TO DIE (1990) and was also in the telephone terror flicks OUT OF THE DARK (1988) and PARTY LINE (1988), opens the film on a bright note with a topless shower scene, followed by a scene of her streaking through the hallways in panties and a wet, flimsy white top screaming her head off until she's finally silenced by a falling stalactite! Prolific, and forever typecast, character actor George 'Buck' Flower (who passed away in 2004) has an amusing bit as a drunk under witness protection who ends up getting smashed into a zillion pieces by a semi truck. Cops are played by Paul Coufos (CHOPPING MALL), as the primary detective, and TV star Phil McKeon as a doofy deputy. Ace Mask (who appeared in most of Wynorski's movies from this time; including 1988's NOT OF THIS EARTH remake) is Grubeck's sleazy attorney. The most bankable name here is perhaps Brigitte Nielsen, who was heavily used in the promotions and featured front and center on some of the initial VHS boxes. Fans of the Amazonian RED SONJA star will be disappointed that she's only in one brief albeit amusing sequence as a sex-starved occult shop owner. 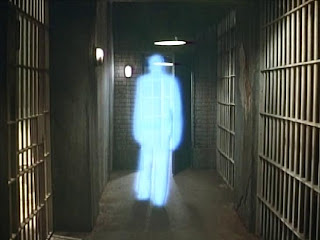 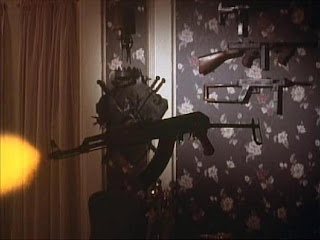 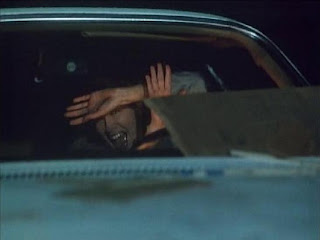 Wynorski himself has stated in numerous interviews over the years that he makes movies to meet girls. Yes, from the horse's mouth, Jim is in this primarily to get some ass. So it's not surprising that one of his off-screen squeezes at the time - Monique Gabrielle - makes an appearance here as a lawyer. Gabrielle began her career as a model (and a Penthouse Pet) before moving on to small, often uncredited roles in big budget Hollywood films. She became a sex symbol thanks to an unclothed scene in the hit Tom Hanks comedy BACHELOR PARTY (1984) and from there on was repackaged as a Scream Queen to star in various B flicks. Wynorski also put her in the aforementioned Not of This Earth and Hard to Die and cast her as a femme fatale in THE RETURN OF SWAMP THING (1989). Despite always looking great, one thing Gabrielle could never be confused for was a great actress. She was much better at doing comedy than serious roles like the one she was handed here, though. In fact, she's the only actor whose voice appears to have been dubbed over... and she barely even has any dialogue! Even stranger, Jimbo allowed her to keep her clothes on in all the aforementioned films (she is however frequently nude in their first collaboration together: Deathstalker II). 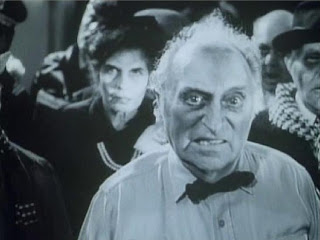 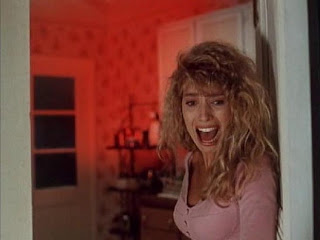 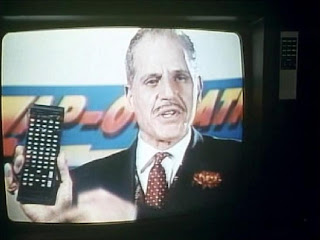 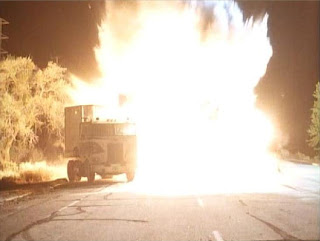 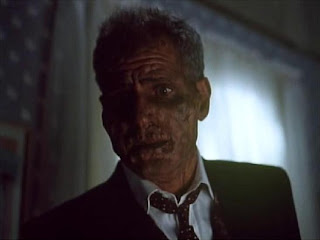 Despite being quite watchable for the duration, a truly rotten ending unfortunately leaves a bad taste in the mouth and forces me to deduct half a point. Three songs from actor Vincent D'Onofrio are on the soundtrack, as well as The Seeds' "Pushing Too Hard; which is played during Gabrielle's death scene (where a black-clad stuntman can be seen driving her car). This Cinetel release has been issued on video and DVD several times.