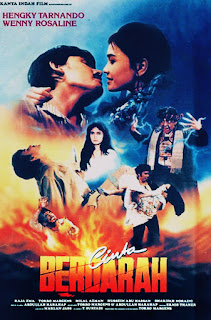 ... aka: Bloody Love
Directed by:
Torro Margens
A brutal fight tied in with a familial dispute leaves Dudung Sasmita (Hilal Azman) facially disfigured and with a bad case of buck tooth. That has everything to do with his estranged, two-timing wife, Rani (Wenny Rosaline), and his sleazy, backstabbing brother, Torro (played by the director), who've been not-so-secretly having an affair. Dudung waits for them to be alone, busts into the bedroom, catches them in the act and then teaches the two of them a lesson... with a machete and a bottle of acid! After murdering both, he hides the bodies behind a brick wall in the basement. Years later, a new couple – architect Anton (Hengky Tornando) and his wife Rita (Raja Ema) – move into the same home. They throw a boring housewarming party, where the highlights include Rita's pet cat “Pussy” flipping her shit at some unseen force lurking the grounds and Rita hearing a disembodied voice that no one else seems to hear. After the guests leave, there's a knock on the door. It's Dudung Samsita, no better for wear. He goes into the basement to “exorcise” the restless spirits, which involves chewing up what appears to be a raw garlic clove and then spitting it at the wall.
Because of the strange visitor, Anton goes to a spiritualist to get answers about just who Dudung is and get some insight into his past. Meanwhile, the garlic thingy doesn't seem to do the trick and the evil behind the wall possess the cat by shooting lasers into her eyes. When Rita is attacked by the possessed Pussy, she's forced to stab her to death with a pair of scissors. The housekeeper (who eventually gets run off) picks up the cat corpse with a shovel but the heavy-breathing wall sucks up all the blood before it can be cleaned.

Rita is soon hearing voices coming from the wall, envisions a kettle is a severed, talking head and has visions of laughing ghosts in a mirror and flashbacks to the original crime (and what led up to it). She floats and spins around in the air and is occasionally hypnotized and lured out of her bedroom at night to be sexually ravaged by the ghost. When Anton sees her writhing on the cellar floor in her nightgown, he grows suspicious that she may be having sex with another man... and, well, he's kind of right, though it's not exactly a consensual relationship.

The horny ghost of Torro starts paying Rita visits (either at night or while the hubby is away), which usually end with her nightgown lying on the floor and her wondering WTF just happened. The ghost is also handsy in other ways and sometimes pulls hair, punches, slaps and chokes poor Rita. It's kind of like a nudity-free PG-rated version of The Entity, though the wife isn't the only one who gets terrorized. Anton suffers from nightmares about a vanishing hitchhiker, is roughed up and forced to bust a bottle over his head. The evil also follows him to the construction site where it almost causes him to have a heart attack and impales a worker with a bulldozer! While all this is going on, Dudung tries to make right by repeatedly attempting to exorcise the spirit.

Prolific actor / director Margens, who also scripted from a story by Abdullah Harahap, made a number of other horror films during this time, including Bloody Wedding (1987), also starring Ema, BLOODSTAINED PAINTING (1988) and A Pair of Deadly Eyes (1989), starring Tornando, Ema and Rosaline. None of these have been released in the U. S. and none are currently available with English subtitles.
★★
Posted by The Bloody Pit of Horror at 7:34 PM No comments: