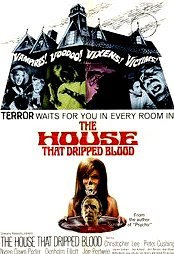 Directed by:
Peter Duffell
There were several dozen horror anthologies made in England in the 1970s. This Amicus production is one the very best, thanks to a talented all-star cast, astute direction from first timer Peter Duffell and a very knowing and clever screenplay by Robert Bloch (PSYCHO) that takes familiar horror conventions and gives them creative new spins. Things center around a large, creepy red brick country home with a sordid past that is continually rented out by realtor A.J. Stoker (John Bryans), a guy who makes sure he warns each new tenant what they might be getting themselves into! Trailing a missing film star there, Detective Superintendent Holloway (John Bennett) learns of the home's blood-stained past from the local police sergeant (John Malcolm). Turns out that the actor isn't the only person who has had trouble in the home and we get to see four stories to prove it... First up is a fairly creepy tale involving reserved horror author Charles Hillyer (Denholm Elliott), who moves into the manor with his wife Alice (Joanna Dunham). Dominick (Tom Adams), the lead heavy in his newest horror opus seems to have leaped from his imagination into the real world, where he pops up at the most inopportune times. A deformed strangler and accomplished lady killer, Dominick also lets Charles know that his wife may be next... But there's more to the story than meets the eye. This delivers a few shudders before a fairly predictable twist ending.

Next up is a stylish wax museum tale about unrequited love and decapitation. Peter Cushing is Philip Grayson, an uptight, never-married, retired stock broker who glumly informs the realtor "I'm used to being alone" when he moves in. He plans on spending his time there gardening, reading and listening to music, but is instead drawn to the "Museum of Horror" waxworks in town. There he sees lots of wax horror figures; werewolf, mummy, etc., plus a hidden display of a woman looking oddly familiar and holding a head on a platter. She's a dead ringer for a woman Philip was once in love with, who never returned the favor. The owner of the waxwork claims the woman was once HIS wife and she was both a murderess and a murder victim. Philip's friend Neville (Joss Ackland), who also had the hots for the woman, stops by and also sees the display. Turns out the 'lifelike' display is actually an embalmed corpse and the owner is an axe murderer! Before all is said and done, there will be a new head or two showing up on the platter.

While the first two segments are both pretty good, the final two are better. Part 3 stars Christopher Lee as John Reid; a stern, overly-protective widower with a young daughter named Jane (Chloe Franks). Though Jane is an angelic-looking tyke (who is scared of fire), dad seems to fear her and won't allow her to have toys or interact with anyone outside the home. Instead of sending her to a public school, he hires teacher Ann Norton (Nyree Dawn Porter, who is excellent) to come stay with them. Puzzled at first by John's cold, neglectful, seemingly abusive treatment toward his young daughter (and the fact he says he's glad his wife died!), Ann soon learns that little Jane has actually inherited an interest in witchcraft from her mother and has fashioned a special voodoo doll out of wax to get back at dear old dad (who loses it and slaps her in the face). This is a very well-done, well-acted, moody, intelligently-written horror story that could have stood alone as a short feature. Easily the most memorable of the lot.

Finally after three serious horror tales, we get some welcome comedy. Jon Pertwee (a standout) is Paul Henderson, a pompous asshole who has let minor fame as a horror film veteran go to his head. There's a hilarious scene where he terrorizes the set of a low-budget movie called "Curse of the Bloodsuckers" he's set to star in. He wanders in with his nose in the air, destroys some of the cheap sets, berates the crew, scoffs at his wardrobe ("Who's this belong to? The Flying Nun?") and even cracks a funny anti-Christopher Lee joke by saying Lugosi is better! Unhappy with his vampire costume, he goes to a costume shop owned by weird-o Theo von Hartmann (Geoffrey Bayldon). The new cloak he purchases there (at a bargain price) turns out to have special powers and transforms anyone who wears it into a (flying) vampire! This causes complications on the set of the movie and with female co-star Carla Lynde (Ingrid Pitt, sporting a lot of cleavage). Things come full circle when Det. Holloway comes to the house to look for the actor.

Some sources claim that Joanna Lumley (of Absolutely Fabulous fame) is in the cast (she's on IMDB as "film crew girl"), but I don't recall seeing her anywhere.
★★★
Posted by The Bloody Pit of Horror at 4:19 AM