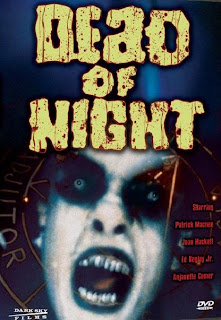 Just like TRILOGY OF TERROR (1975) a year earlier, this made-for-TV anthology features three tales; two of which are only fair and the last good enough to make the rest of it worth sitting through. Both films were from the team of director / producer Dan Curtis and writer Richard Matheson, who also collaborated on the excellent Kolchak films THE NIGHT STALKER (1971) and THE NIGHT STRANGLER (1972), as well as one of several 70s versions of DRACULA (1974), the werewolf tale SCREAM OF THE WOLF (1974) and others. Things begin with 'A Second Chance,' based on a short story by Jack (The Body Snatchers) Finney. Frank (Ed Begley Jr.) thinks he's lucked out purchasing an antique Jordan car for just 100 bucks. He restores it, takes it out on a drive and finds himself transported back to the year 1926, where preventing an accidental death may alter his modern day life. Despite being completely out of place in this particular anthology, this mild, sub- Twilight Zone supernatural tale (also featuring Christina Hart, Ann Doran and E.J. André) is maudlin and ponderous. If I wanted icky sentimentality, I'd rent something by Spielberg, not something called Dead of Night with a demon face on the cover. Moving on...

Next up we have the period-set vampire story 'No Such Thing As a Vampire' which as the title alludes might not even really involve vampires. Fragile Alexis (Anjanette Comer) is being driven to the brink by what she assumes are nightly vampire attacks. Well, she's been waking up with two puncture wounds on her neck and a little less blood than usual, at least. Her husband, Prof. Gheria (Patrick Macnee) is skeptical about the existence of vampires, so he invites over a friend named Michael (Horst Buchholz) to help watch over his wife, leading to one major (though not actually too surprising) twist. This one's certainly nothing to write home about, but the actors are fine and it's mildly entertaining. Familiar charactor actor Elisha Cook Jr. has a small (though semi-important) role as the superstitious butler.

Our fears of sitting through yet another underwhelming and utterly forgettable anthology are vanquished with the arrival of our final story 'Bobby." Obviously inspired by W.W. Jacobs' classic story 'The Monkey's Paw" (which has been filmed numerous times as early as 1915) this stars Joan Hackett as a grieving mother who uses black magic to bring her 'dead' son Bobby (Lee Montgomery) - who presumedly drowned but whose body was never found - back to life. Bobby shows up cold, wet and confused on her doorstep. She invites him in, gets him dried off, offers him something to eat... and then suddenly finds herself being terrorized by her once-docile and obedient little boy. This segment (fondly remembered by many who saw it on TV as kids) is suspenseful, has several genuinely creepy scenes and an effective, startling climax. Curtis and Matheson would even recycle the story for TRILOGY OF TERROR II (1996); which also marked the final time the two men would work together.

Originally released on VHS by ThrillerVideo (which included Elvira commentary), then reissued on video by Paramount. In 2009, Dark Sky Films finally released a nice-looking print to DVD. Extras on that include the unaired 1969 proposed pilot (A DARKNESS AT BLAISEDON) for a series also to be titled Dead of Night (another Curtis project!), as well as deleted scenes from the 'No Such Thing As a Vampire' segment, unused intro footage and voiceovers and some score highlight from composer Bob Cobert (who scored the majority of Curtis' stuff).