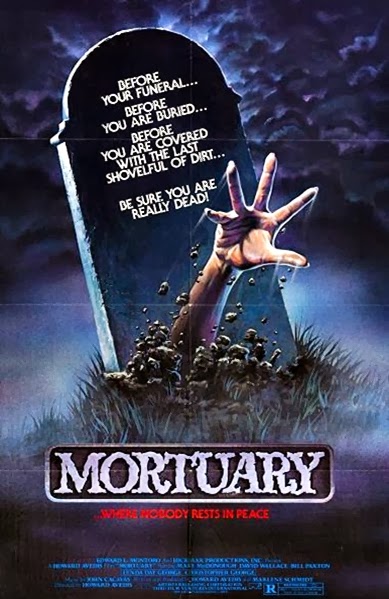 
When child / teenage stars are best-known for starring in a family friendly TV show, oftentimes they'll intentionally sully their own squeaky clean image in an effort to be taken more seriously as an actor. One of the most notable and high profile examples in recent times was Elizabeth Berkeley's bizarre career trajectory; playing a proper, straight-laced brainiac on the corny TV series "Saved by the Bell" one day and giving NC-17 lap dances as hot-blooded Vegas stripper Nomi Malone in Paul Verhoeven's notorious Showgirls (1995) the next. In the early 2000s, Jessica Biel caused a mild uproar when she went from the virtuous WB series "7th Heaven" to a sexy spread in Maxim Magazine. After the Maxim exposure, playing a voracious college student in The Rules of Attraction (2002) and filling out a pair of ass-hugging jeans to in the gory Texas Chainsaw Massacre remake (2003), her "good girl" image became a thing of the past. It's gotten to the point now where people don't even really raise an eyebrow at Disney stars Selena Gomez and Vanessa Hudgens headlining Harmony Korine's Spring Breakers (2012). None of the above-mentioned actresses were exactly trend-setters, though. They were just following familiar Hollywood protocol. Mortuary perhaps is one of the earlier examples of a G-Rated TV good girl taking a walk on the R-Rated wild side in an attempt to branch out. It stars Mary Beth McDonough, then-known for the wholesome, long-running and extremely popular TV show "The Waltons," which began in 1971 and lasted for an entire decade. The same year the show ended and the same year Little House on the Prairie star Melissa Sue Anderson was seducing boys and then shoving shish-ka-bob spears down their throats in HAPPY BIRTHDAY TO ME, Ms. McDonough appeared in the R-rated exploitation film Lovely But Deadly and this slasher flick, which was actually filmed in 1981 but not released until two years later. The role required a nude sex scene and a nude-while-lying-on-a-slab scene and, though she ultimately ended up using a body double, this material was still a clear departure from the moral values being eschewed up on Walton's Mountain. 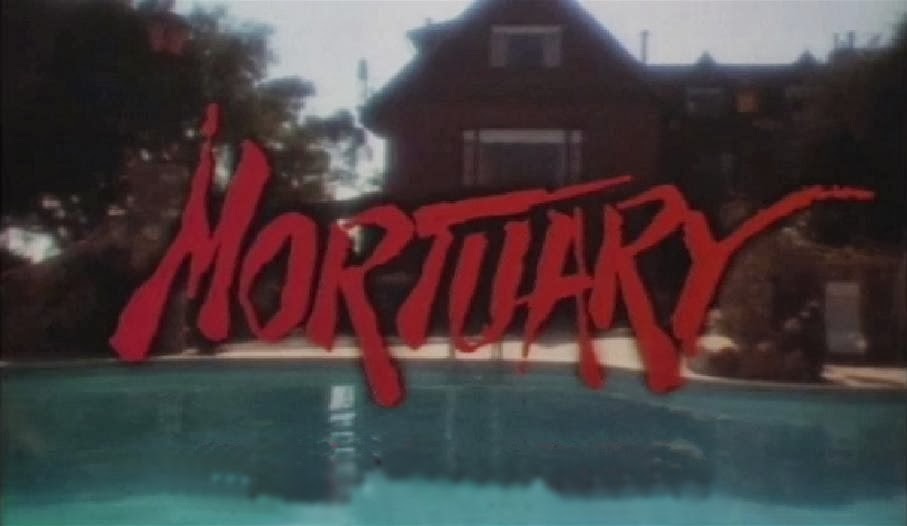 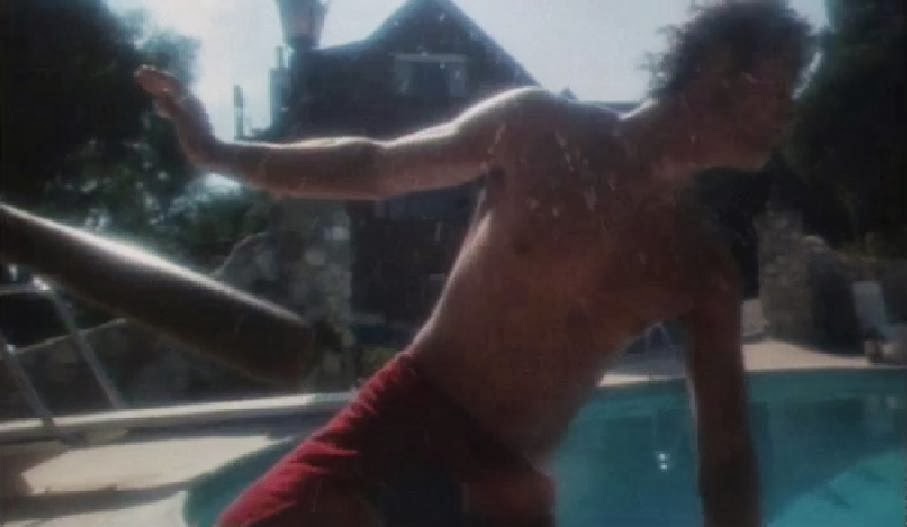 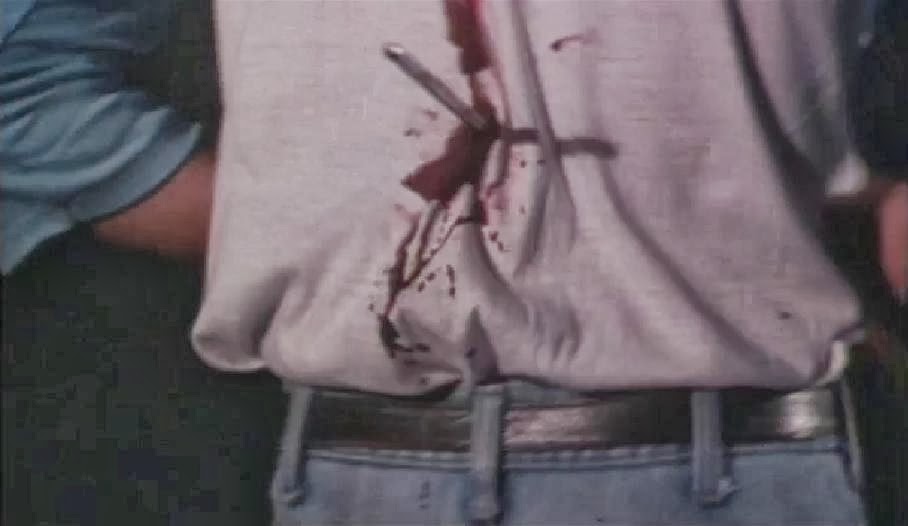 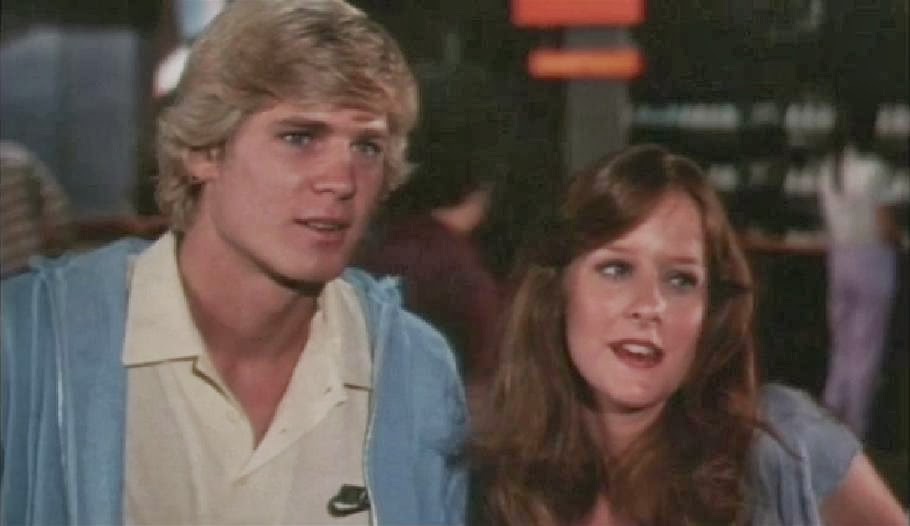 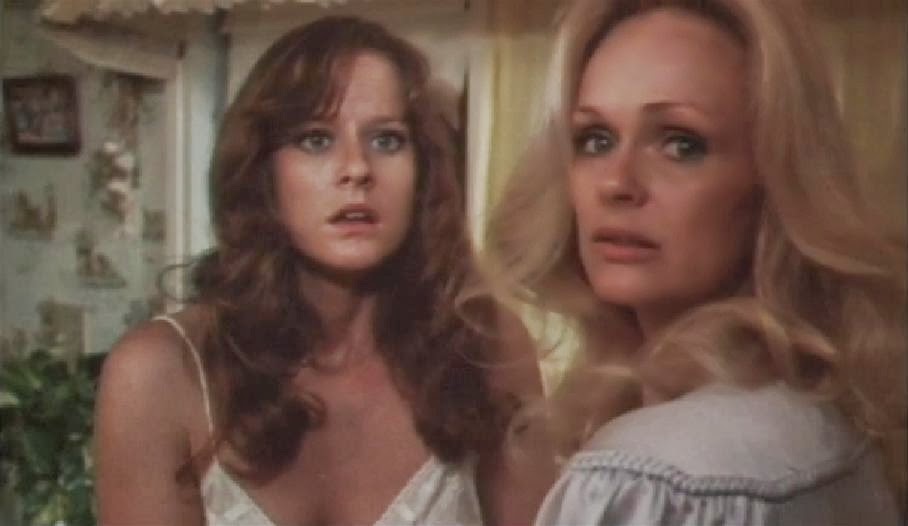 McDonough plays traumatized college student Christie Parson, who found her dad dead in their swimming pool a month earlier. Though it's been written off as an accidental death, she suspects otherwise and may have even seen the murder, but is currently blocking everything out. Ever since the "accident," Christie's become increasingly paranoid, suffers from frequent nightmares and sleepwalking episodes and starts to suspect her own mother Eve (Lynda Day George) may have somehow been involved in her father's death. It doesn't help matters when Christie's boyfriend Greg (David Wallace) sneaks into a warehouse one day with a friend and catches Eve involved in some kind of black mass ceremony being conducting by shady neighborhood mortician Hank Andrews (Christopher George). Hank isn't a very nice man ("Get out of here before I embalm you!") and even threatens to kill Greg if he doesn't stop snooping around. Hank's wife supposedly committed suicide and his son, Paul (Bill Paxton), is a weird-o being forced into the family trade against his wishes. Paul was also a former patient of Christie's late psychiatrist father, who'd recommended the boy be put in a psychiatric hospital before being killed. Hank refused and ever since his son has developed some kind of fixation on Christie because she's always been kind to him. 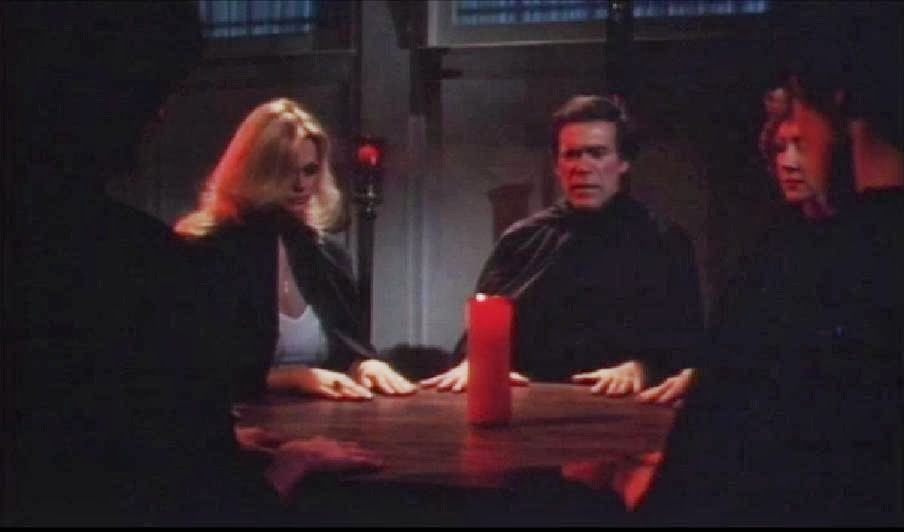 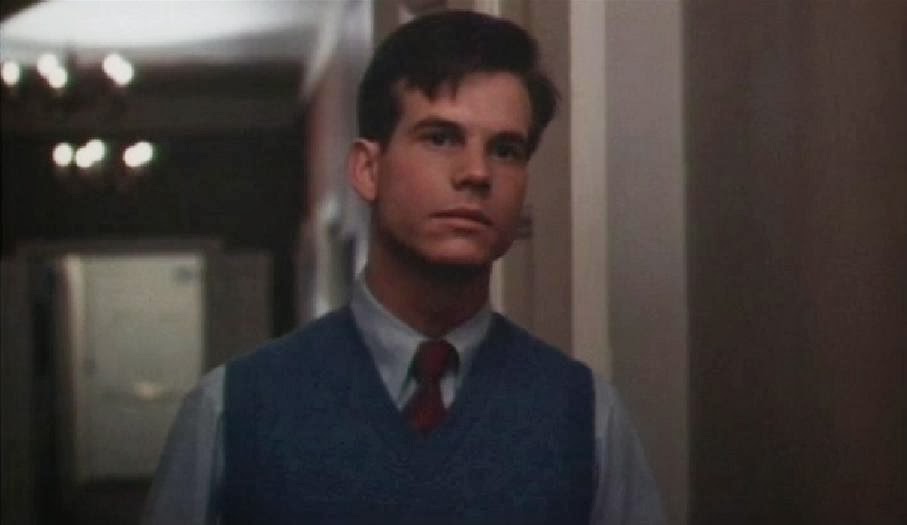 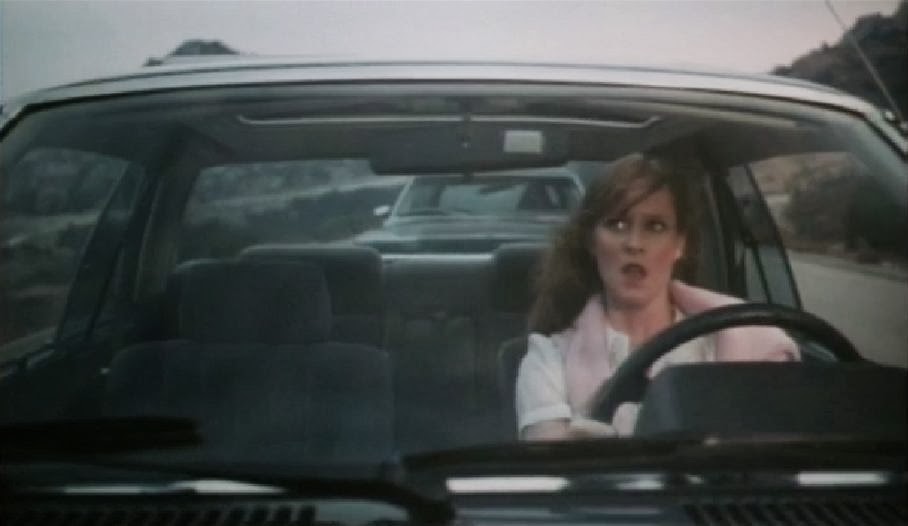 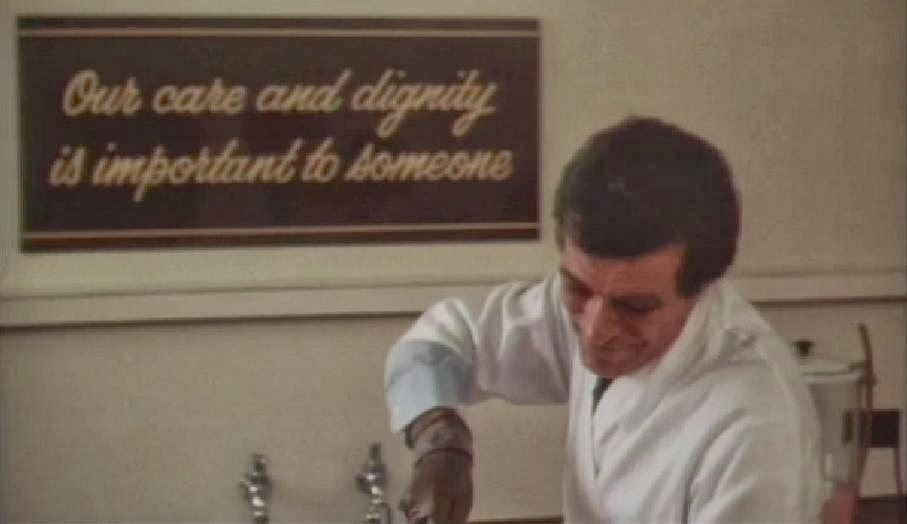 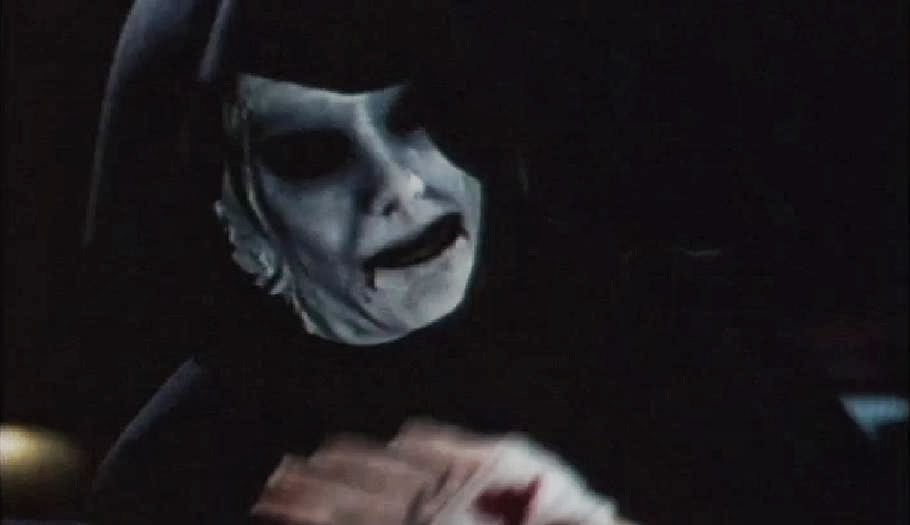 Someone wearing a white latex face mask (which looks kind of like Pazuzu) is running around killing people with an embalming trocar (needle) and stalking / attacking Christie. Whoever it is drives a black mortuary station wagon, is wearing a black robe identical to the ones worn by Hank and his cultist followers and seems to get some sick sexual satisfaction out of the murders as judged by a scene where they repeatedly poke a nightgown-clad victim with their needle while moaning in ecstasy. Is Paul an unhinged psycho who should have been committed like Dr. Parson recommended? Does Eve have the best interests of her daughter in mind, or is she trying to drive her crazy? Is Hank hiding some deep, dark secret about his mortuary business? Has Christie lost her mind after he father's untimely demise? All of the above questions are eventually answered, albeit in a pretty predictable fashion. 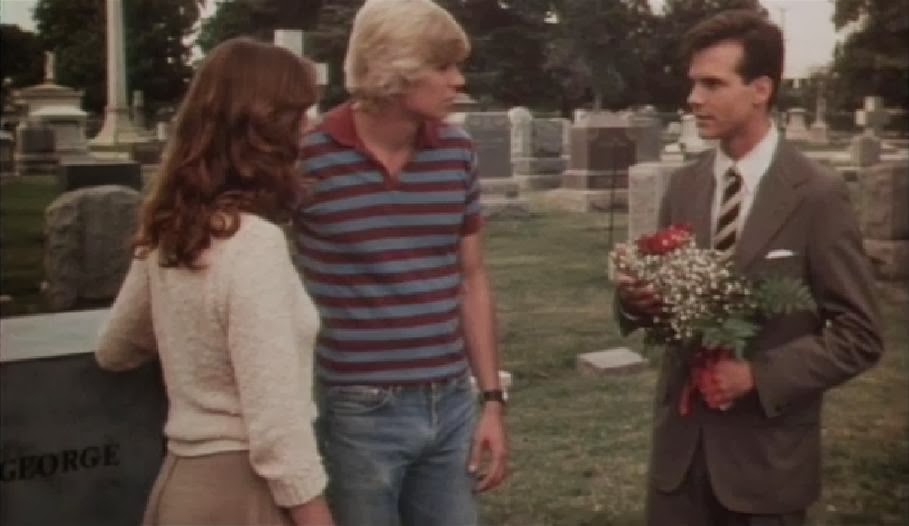 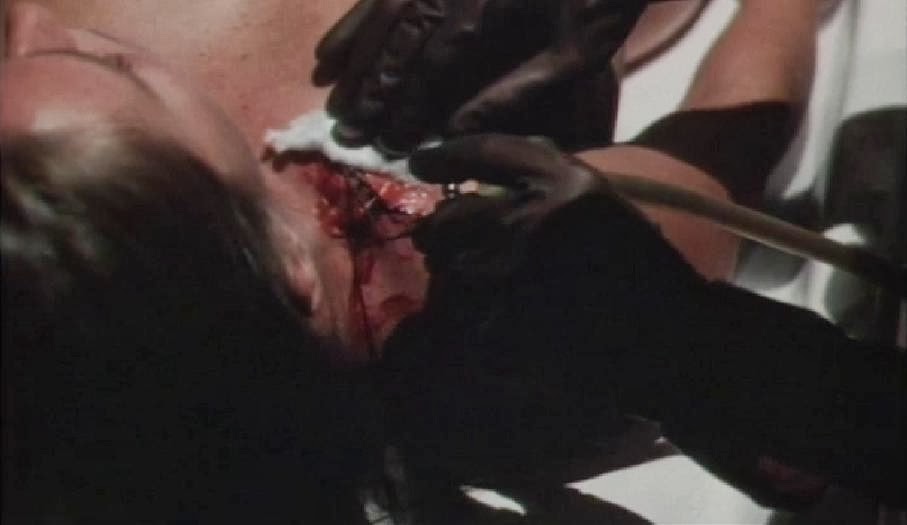 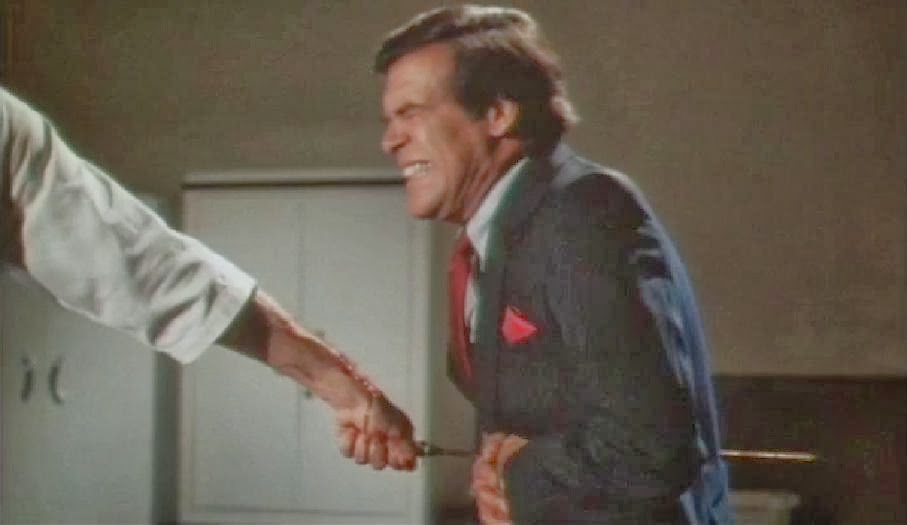 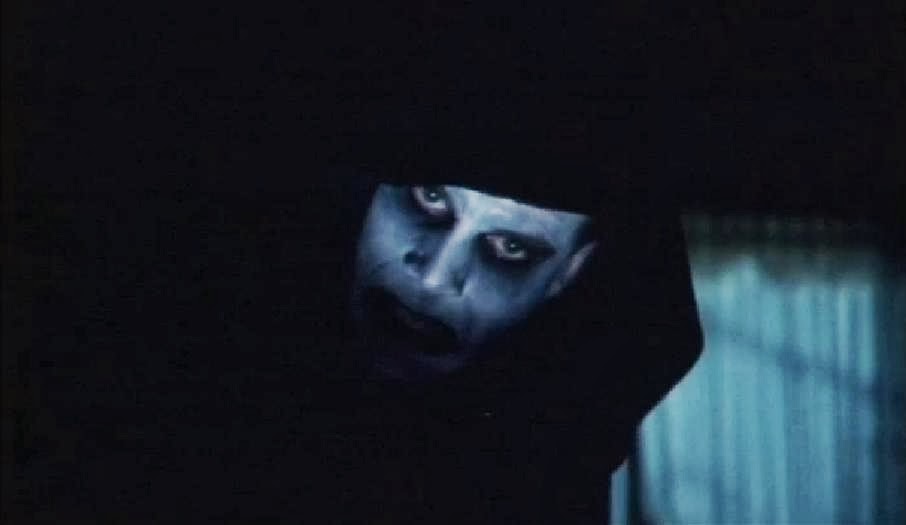 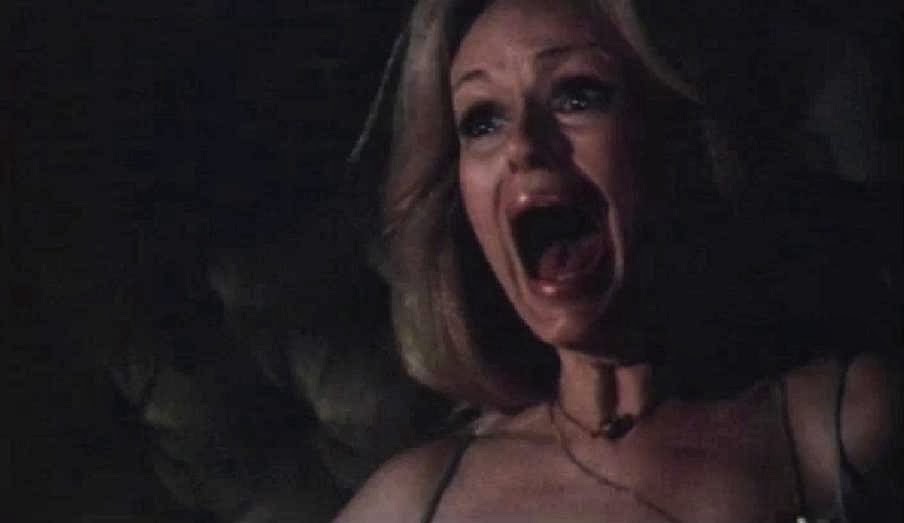 While nothing special, Mortuary basically gets the slasher job done with a minor mystery, chase scenes, a little nudity, some violent / gruesome moments and a twist ending. Director / producer / writer Avedis and his wife Marlene Schmidt (who co-produced, co-wrote and appears in a small role) had been making exploitation flicks since the early 70s so they pretty much knew what they were doing by this point. The cast is pretty appealing and the acting is a notch above average. As with most other similar flicks, there are some incredibly stupid moments in here, though. During one scene, Christie is attacked at her home by the killer and a window gets busted out in the process. So what do Christie and her mother do? Call the police? Go to the hospital for the cuts on Christie's hand? Nope. A minute later they're laughing and then just go upstairs and go to sleep. I don't know about you, but I'd have a difficult time nodding off knowing some psycho was just there and there's a window busted out downstairs. And I certainly wouldn't be sleeping with my door left unlocked afterward! Needless to say, the psycho returns, Christie manages to run outside... but then she goes back to her house where the killer is just waiting on her. If you can overlook a few dumb moments like those, then this isn't too bad. 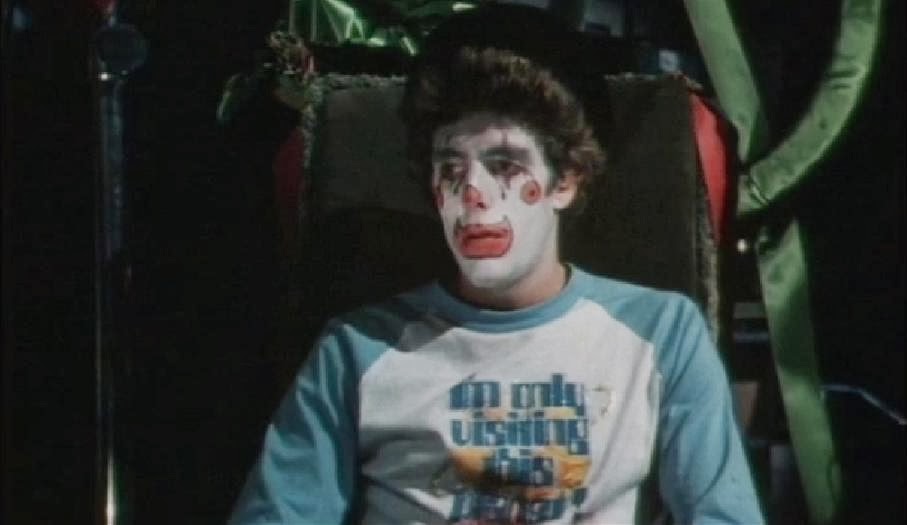 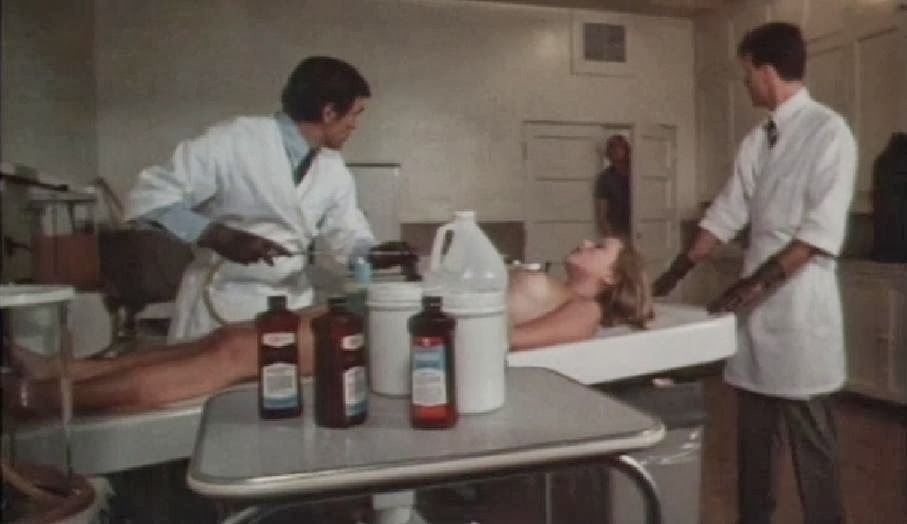 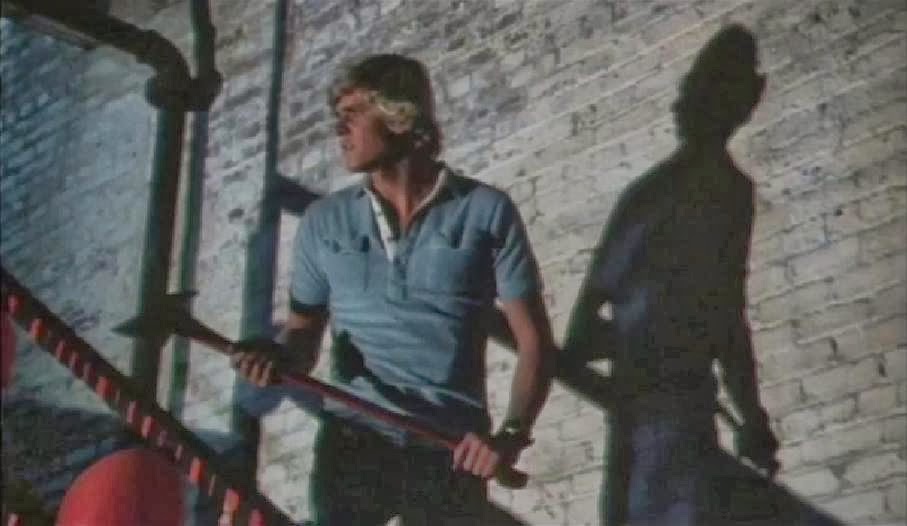 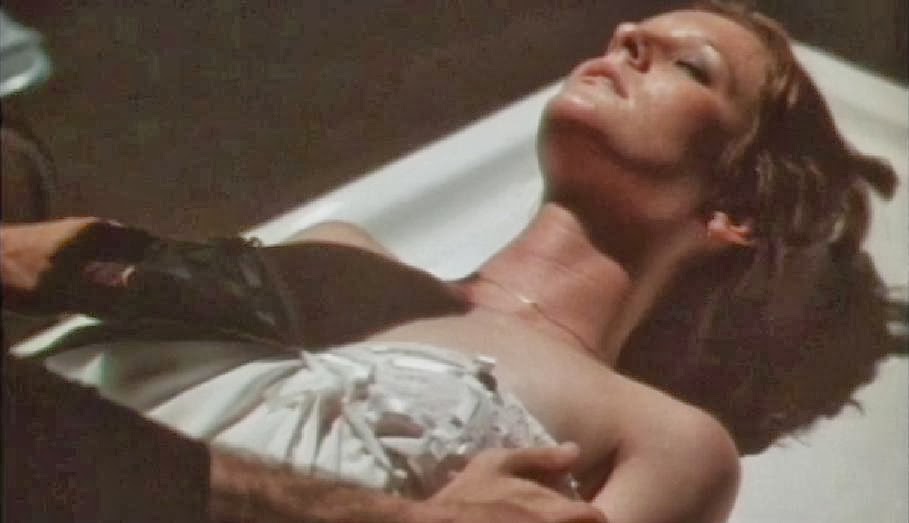 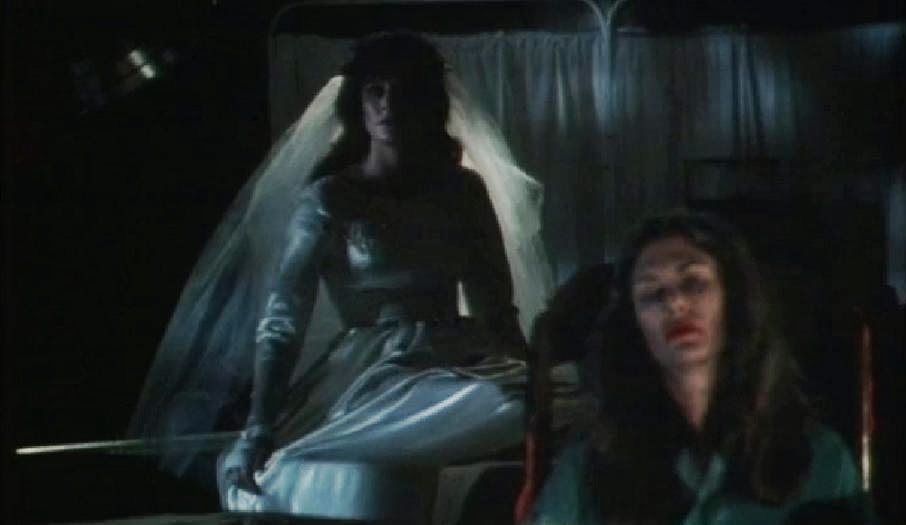 Gary Graver shot the film and does a typically nice job of it; giving this a soft, sometimes hazy dream-like texture along with some bold coloring for the occult scenes. For some strange reason, Michael Berryman appears in the trailer as a grave-digger but does not actually appear in the film itself. The U.S. theatrical poster was also pretty misleading and featured a hand bursting out from a grave; clearly insinuating this will feature zombies, which needless to say isn't the case. The UK release (under the title Embalmed) took it a step further by featuring an actual full zombie on the cover and warning us to "... beware of the LIVING DEAD!!" 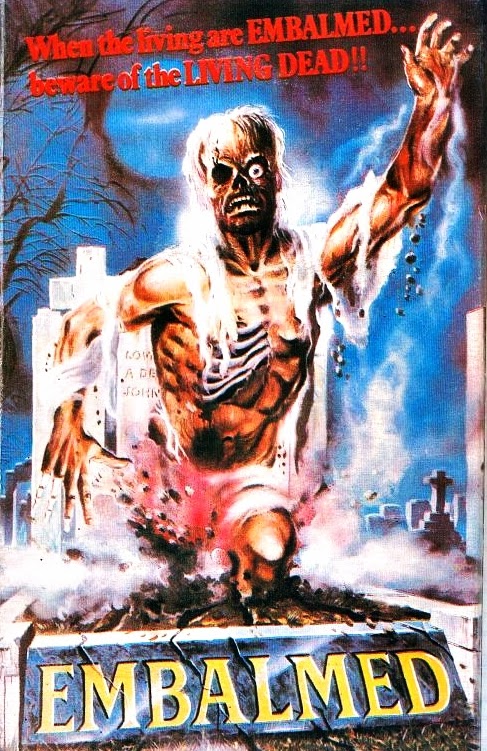 Questionable marketing aside, Mortuary was a success in theaters on a limited release and managed to make 4.3 million domestically on a 250,000 budget. While that may not sound like much, it was enough to out-perform the likes of The Evil Dead, Videodrome and Pieces - another slasher starring Christopher and Lynda Day and also released by Film Ventures International - by several million dollars. The film was released to VHS in 1984 on the Vestron label and made its DVD debut in 2012 through Scorpion Releasing, as part of their "Katarina's Nightmare Theater" collection.