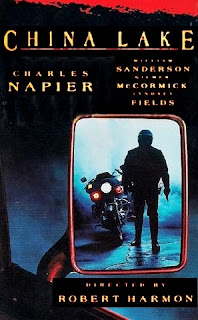 
After working as a cinematographer on the documentary The Jupiter Menace (1982) and the strange and pretty good The Black Room (1982) and doing photo stills for Charles Band movies like Adult Fairy Tales (1978) and TOURIST TRAP (1979), Harmon made his directorial debut with this 35-minute, self-financed, 3000-dollar-budgeted short that he also wrote, produced and photographed. Filmed in 1981 over a 11 day period with the entire cast and crew working for free, China Lake was in post production for two long years before being shown theatrically. After being well-received at the Chicago International Film Festival, it then became a handy promotional tool for the director and helped him land an agent and other film jobs. Soon after, he secured the director's seat for the 6 million-budgeted studio film THE HITCHER (1986), which ended up under-performing at the box office but would eventually pick itself up a following of sorts. Both this and The Hitcher, as well as Harmon's later Highwayman (2004), share many things in common. All three involve a psycho targeting victims along desolate, picturesque stretches of quiet road. Producer / co-writer Beth Tate later co-produced a feature-length “sequel” (more like a remake actually) to this short called The China Lake Murders, which starred Tom Skerritt and Michael Parks and debuted on the USA Network in 1990.

L.A. motorcycle cop Donnelly (Charles Napier) has just earned himself a much-needed vacation, so how does he spend it? Catching up on his sleep? Going to the beach to work on his tan? Vegging out in front of the TV with a stack of horror DVDs? Nope, nope and nope. He's up bright and early as soon as the sun rises and back out patrolling the streets. This guy is dedicated. He's also unhinged. On a stretch of nearly-deserted desert road, Donnelly gets his kicks terrorizing anyone unfortunate enough to be driving through. His first victim is Helene (Gilmer McCormick), who's sober but subjected to a humiliating sobriety test anyway. After walking a straight line drawn in the sand, closing her eyes and touching her nose with her fingers and lifting one leg, she finds herself handcuffed and stuck in the trunk of her car. “Don't worry about it,” the officer soothingly tells her, “Somebody will be around shortly...I'm sure.” Donnelly swings by a closed gas station long enough to change back into civilian clothes and steal some gas after shooting the lock off the pump.

The next day, he swings in to a diner; the same diner he goes to the same time every year on his way up to visit China Lake. Waitress Kitty (Lindsey Fields) points out that China Lake is a dump but Donnelly explains its appeal to him: “I can go up there. I can be alone. Do what the hell I want to do. Nobody bothers me.” And “Do what the hell I want to do” is exactly what he does. This trip is a way for him to blow off some steam from work by violently venting out his frustrations on others. A pair of loud, dirty cement workers, which he nicknames Little Germ (William Sanderson) and Big Guy (Mickey Jones) in his voice-over, manage to piss him off by their mere appearance. He fantasizes about torturing one by burning his hand and tongue on a grill and, later, lucks out when one of the men gets a flat tire and he stumbles upon him.

Character actor Napier does typically fine work in the lead role (especially in the diner scene where he subtly alternates charm and menace), the desert scenery is great to look at it (and nicely shot) and there's some imaginative camerawork, with fast-moving POVs zooming down the highway and looking over the handlebars, with many shots attached to the side of a moving motorcycle. Fans of The Hitcher will also find this of interest and have fun spotting all of the similarities between the two. That said, the thrills and suspense are pretty much nonexistent and the concept of a "trust-worthy" rogue killer cop wasn't anything new by 1983 standards (about as "shocking" as a killer priest thanks to the dozen or so Italian gialli of the 70s that used that as a "twist"). Harmon went on to make the shitty box office flop They (2002), but did better on the small screen, receiving Emmy and Director's Guild nominations for his TV biopic Gotti (1996).

As with many short features from the 80s before DVD extras came into play, China Lake sat out for the entire VHS era. It went mostly unseen until the German company Kinowelt Home Entertainment included it as an extra on their 2 disc Special Edition release of The Hitcher in 2003. The short even comes with a text introduction and director's commentary track. This same release was distributed by Momentum Pictures out of the UK and Studio Canal out of France.