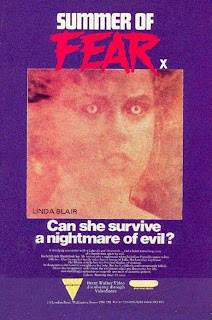 At the time, director Wes Craven was best known for the gritty, violent shockers THE LAST HOUSE ON THE LEFT (1972) and THE HILLS HAVE EYES (1977), so this milder made-for-TV effort marked both a change of pace for him as well as a (more-or-less) successful step toward mainstream acceptance. On the other hand, actress Linda Blair (who'd just done the horribly-received EXORCIST II: THE HERETIC) was just ending her reign as teen queen of the controversial tele-movie. Prior to this, she'd played a teenage alcoholic, a kidnapped illiterate teen, a sickly teen awaiting a kidney transplant aboard a doomed aircraft, a institutionalized juvenile delinquent who gets pinned down and raped with a broom handle and other roles that make what goes down in this horror flick look a little tame by comparison. So I'd say this one probably helped Craven's career but really didn't do a whole lot for Blair's. Either way, within the limitations of the TV movie, it's really not a bad little effort.

Horse-loving teen Rachel Bryant (La Blair) lives happily on her ranch home with her well-to-do stock broker father Tom (Jeremy Slate), photographer mother Leslie (Carol Lawrence) and two brothers, eldest Peter (Jeff East, who also appeared in Craven's follow-up DEADLY BLESSING) and youngest Bobby (James Jarnigan). Things seem to be going well for the teen and her family until her Ozark-bred-and-accented cousin Julie (Lee Bryant) - whose parents died in a mysterious car crash - comes to stay with them. Starting out mannered, shy, genteel and demure, Julie soon reveals herself to be an evil, black magic-practicing witch. She uses her powers to kill off Rachel's beloved horse Sundance, steal away her boyfriend (Jeff McCracken) and puts all the men under her seductive spell, which is basically written off as petty jealousy by most of the people involved. Upon finding signs of witchcraft (a wax horse with her horse's hair, a photo with red dots which she thinks gave her hives, etc.) hidden in their shared room, Rachel begins studying up on witchcraft and seeks help from their neighbor; occult expert Professor Jarvis (Macdonald Carey). Can she win her family - and her life - back before it's too late?

Though it offers up nothing really new and has a fairly low horror quotient (most of which is saved for the finale), the film itself is still pretty entertaining. The performances here are mostly solid. Though Blair has a few irritatingly whiny emotional moments, you still can't help but find yourself cheering her character - who has to find the strength and resiliency to take on a powerful corruptive force who has turned nearly everyone she knows against her - on. Purcell is excellent as the evil cousin, and her catty exchanges with the star are definite highlights. Hell, they're better than the actual horror scenes! There's even some icky sort-of incestuous theming thrown in for good measure. The Nanny fans (who I doubt spend much time perusing the index of The Bloody Pit of Horror) will enjoy seeing Fran Drescher - complete with annoying accent - in an early role as Blair's best friend (who also turns her back on her). Gwil Richards, Patricia Wilson, Billy Beck (who also had a small role in Craven's INVITATION TO HELL), Hills star John Steadman (playing a veterinarian) and Beatrice Manley (from THE BABY) round out the cast.

Originally released to the small screen as STRANGER IN OUR HOUSE, Summer is the extended theatrical cut which was used when the film played theatrically in Europe (the same cut used for the U.S. DVD release). 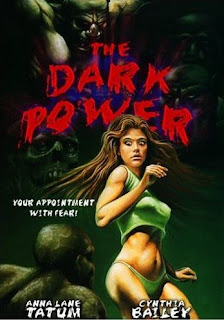 Former 40's western star Lash La Rue (with his trademark bullwhip) headlines this quirky Indian-themed zombie tale shot on the cheap in North Carolina. An elderly Indian medicine man dies and his property - which includes four graves marked with sacred Eagle daggers - goes up on the market. Flirtaceous reporter Mary (Mary Dalton), who's doing a story on the Indian, runs into her college-aged Beth (Anna Lane Tatum) - who has found herself without a place to stay this school year - and uses her connections to allow Beth to rent out the home. Ignorning the land's cursed reputation, Beth decides to move in and convinces her friends Tammie (Cynthia Bailey), Lynn (Cynthia Farbman) and Susan (Suzie Martin) to also move in and share rent. After all, it's a big enough place. And it even has a jacuzzi bath and a pool table! The girls have a few issues getting along (which I'll address here in a minute), but they'll have even bigger problems to deal with when the inhabitants of the graves sitting in their front yard decide to pay them a visit one evening. In other words, it's witch doctor zombies vs. college girls, with each of the Indians getting their own signature murder weapon (tomahawk, bow and arrows, etc.) and Lash playing the heroic sheriff who shows up just in the nick of time to spout such lines as "Feel my whip, you son of a bitch!" The results are upbeat, silly and actually quite fun in a cheap movie way.

What really makes this one stand out from the pack is that it actually tries to comment on racism! The Lynn character is a racist bitch. She irrationally hates Tammie because she's black, demands her housemates kick her out, has no problem throwing out the "n" word, hangs confederate flags around the house and invites her obnoxious brother (Marc Matney) to come live with them in hopes of driving Tammie out. During the night of the Indian attack, the brother even invites his racist friends over to crack jokes at Tammie's expense. The nice part is that even being faced with all this crap, Tammie stands her ground, doesn't budge and manages to keep a positive attitude throughout. Even better, she eventually emerges as this film's true heroine, not only for putting up with a bunch of unbelievable bigots and somehow managing to maintain her dignity in the process, but also for her survivalist instincts and zombie fighting skills. Going into this I certainly wasn't expecting to find one of the most memorable leading ladies in any 80s horror film (which includes all bigger-budgeted mainstream releases), but here she is, anyway! Even more interestingly, the actress playing her ended up becoming a top New York fashion model and can now be seen on to the reality TV series Real Housewives of Atlanta.
Though Tammie pretty much dominates the proceedings, many of the other characters are at least broadly defined and have some personality to them. Top-billed Lash (who appeared in the same director's sci-fi/western ALIEN OUTLAW the same year) also gets some nice moments, particularly at the end. The Indian designs themselves are pretty good and the film has a sense of humor (though I could have done without a few slapstick moments involving the zombies and some dumb flatulance jokes). There's a decapitation, a throat slashing, lots of arrow hits and some other bloody moments, plus one topless scene. The film does start out a little slow, but hang in there, it gets better.

The VHS release was from Magnum and it's also on DVD from VCI Home Video. 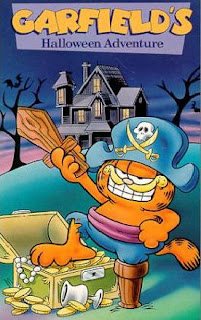 ... aka: Garfield in Disguise