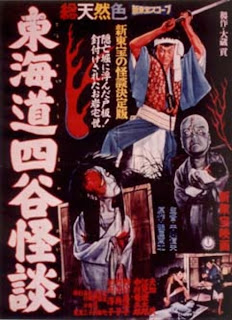 
Illusion of Blood is not unlike many other heavily moralistic Japanese 'kaidan' (ghost tales) produced during the 50s and 60s. It's set in post-war feudal times in an impoverished area where villagers are desperate for not only food and money, but also a semblance of basic human dignity in a world where the 'have nots' must degrade themselves on a daily basis in order to just survive. It involves a prideful former samurai and the ego associated with such a position as well as the pitfalls of letting pride get in the way of ones morals. And it - like dozens if not hundreds of Japanese productions from this era - is a revenge-oriented tale of a long-suffering, wrongfully killed person returning from beyond the grave to settle the score. This one was based on Nanboku Tsuruya's very popular play Yotsuya Kaidan ("The Yotsuya Ghost Story"), which was frequently performed in kabuki theatre but has also spawned no less than a dozen film adaptations, from as early as 1912. One of the definitive versions of the story was Nobuo Nakagawa's Ghost Story of Yotsuya (1959), but this one is also worth a look and has its own unique merits despite the familiarity.

Perhaps the chief drawing card here is lead actor Tatsuya Nakadai; one of the most respected and acclaimed Japanese film stars of all time. Prior to taking on this role, Nakadai had appeared as Unosuke the gunfighter in Yojimbo (1961), won many awards for his performance in Harakiri (1962) and had notable roles in numerous other films, including The Face of Another (1964) and the Oscar-nominated supernatural anthology Kwaidan (1964). His distinguished career hasn't faded much throughout the years (he'd become a favorite of Akira Kurosawa and appeared in 1980's Kagemusha, 1985's Ran and others) and he continues to act to this day. Here, Nakadai is given a good platform for his talents, giving an intense and well-modulated performance as the increasingly more unhinged samurai Iyemon Tamiya. After the death of a local warlord whom he used to work for, Iyemon has been eking out a sorry living in the slums, but poverty itself hasn't been enough to make him part with his prized samurai sword, which he refuses to sell. Iyemon is in love with Oiwa (Mariko Okada), but because of his lowly status as an umbrella maker, Oiwa's father (Yasushi Nagata) refuses to give him his blessing. In fact, he's been forcing Oiwa and his other daughter Osada (Junko Ikeuchi) into selling their bodies at a local brothel to help support the family.

Deciding he isn't going to let anyone keep him from Oiwa, Iyemon murders her father with his sword. While scouring the swamp looking for a place to dispose of the body, Iyemon runs across Naosuke (Kanzaburô Nakamura), who's in love with Oiwa's sister and has killed - and skinned off the face of - HER lover. Both men conspire together to conceal their crimes, makes it look like the work of vagrant thieves and go about their lives with the sisters. Oiwa moves in with Iyemon and eventually gives birth, but he quickly grows tired of her and the crying baby, whom he can barely support. Finding the responsibility of several other mouths to feed too much to handle, Iyemon starts sneaking out at night to romance young Oume Ito (Mayumi Ôzora), the spoiled daughter of one of the few wealthy man in the area. Oume's father (Eitarô Ozawa) promises Iyemon that if he marries his daughter he'll set him up with a nice position for another lord. The Ito family's evil nursemaid (Keiko Awaji), in conjuction with the wishes of Mr. Ito and his daughter, gives Iyemon some "special medicine" to give to his wife. The "medicine" ends up horribly disfiguring her face. Iyemon kills her, his baby and a servant boy, claims Oiwa ran off with the servant and then tries to go about his new life. But Oiwa's restless spirit has other ideas in store for all of those responsible for her death.

Though slow going, the writing and production values are competent and Nakadai does a good job pacing out his character's decent into amorality and mental deterioration; full-blown psychosis overwhelms his character by the very end. The primary characters are all strongly defined individuals and the entire supporting cast does well. There's little humor here; it's mostly grim, oppressive, murky, the lighting is consistently dark and the film doesn't play favorites (the innocent people die along with the guilty). The supernatural and horror scenes, relegated primarily to the final half of the film, are well done. One of the most startling effects takes place in the swamp, where Iyemon had disposed of the bodies of Oiwa and the servant (he'd nailed them both to a door and sunk them together). During one sequence, the door suddenly pops out of the water with Oiwa's bloated corpse on top and her face suddenly melts off to reveal the skull underneath. A few less-convincing effects (namely ones involving [stuffed] rats) don't harm the film too badly.

Never released in the U.S. on either video or DVD. However, the film was issued on DVD in the UK. The print is widescreen - though quite dark - and has English subs.