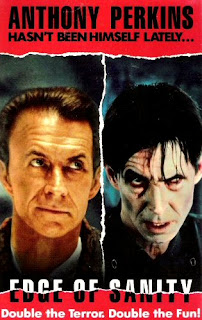 ...aka: Dr. Jekyll and Mr. Hyde
...aka: Dr. Jekyll et Mr. Hyde
...aka: Split - Edge of Sanity
Directed by:
Gérard Kikoine
Most Harry Alan Towers productions from the late 80s/early 90s are awful, but this is an exception. One big reason is having Anthony Perkins in the lead role. He gives an excellent, completely unhinged performance in this entertaining, interesting, pretty kinky fusing of Robert Louis Stevenson's Strange Case of Dr. Jekyll and Hyde and the Jack the Ripper legend. Tony is obsessive scientist Henry Jekyll, who becomes crazed killer Jack Hyde when he smokes an experimental drug. Flashbacks to his disturbed childhood show that young Henry witnessed a murder. Older Henry visits a whore-house frequently and slits the necks of various attractive prostitutes. I must admit that It's pretty startling to see Mr. Perkins ripping the panties off of hookers, rubbing their asses and sexually satisfying them with his cane before brutally killing them, but that's exploitation for ya. A man (Ben Cole) and a woman (Sarah Maur Thorp) at the whorehouse smoke up with him, have sex in front of him (with his help and encouragement) and later become his crazed followers. The guy hangs upside down in one scene while Henry and the woman slice him up and laugh maniacally. Glynis Barber co-stars as Henry's devoted, compassionate and charitable wife (who volunteers helping prostitutes and the homeless) in scenes that oddly parallel Henry/Jack's sex-violence spree. Also in the cast are David Lodge, Jill Melford and Claudia Udy.

One of the most surprising things about this is the arty and unusual direction by Kikoine (who previously had done porn, movies for Playboy TV and the pretty awful Poe adaptation BURIED ALIVE for the same producer one year earlier). The camera tilts, spins and pivots, some set pieces are almost black and white and neon pink lighting is all over the place. Perkins gives another one-of-a-kind performance. Some will probably claim he's overacting here, but it's appropriate for this material and no one plays a neurotic, fidgety, laughing maniac quite the same way he does. Actress Maria Rohm (Towers' wife) was the associate producer.
★★1/2
Posted by The Bloody Pit of Horror at 8:05 PM