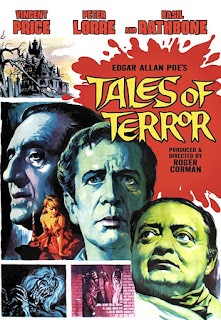 
Directed by Roger Corman. Richard Matheson adapting Edgar Allan Poe. Starring Vincent Price, Peter Lorre and Basil Rathbone. I already knew I was going to get at least some enjoyment out of this before it even began. This is a middle entry in Corman's celebrated Gothic Poe series that started back in 1960 with The House of Usher and concluded four years later with The Tomb of Ligeia. It's also the only anthology film of the eight part series and features three separate Poe tales: "Morella," "The Black Cat" (which also includes elements from Poe's "The Cask of Amontillado") and "The Case of M. Valdemar," with narrated linking segments featuring blood dripping and a disembodied heart beating narrated by Price. Initial reviews weren't always kind but time certainly has been for these. Every single one of Corman's Poe films is well-made and feature good acting and production values on a modest budget. Most of these films were also box office sleeper hits in their day. And, interestingly enough, it was teenagers who were actually flocking to see these classic literary adaptations in drive-ins and making them hits! Boy, how times have changed. 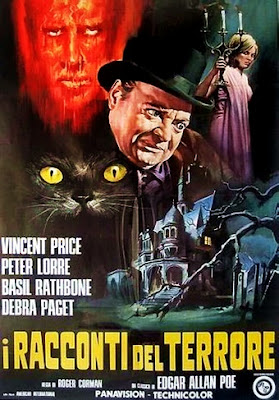 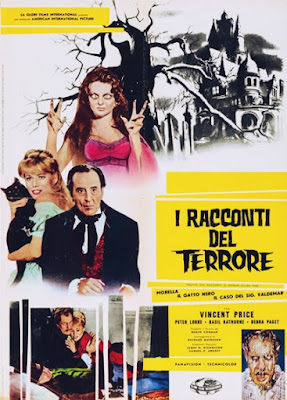 In "Morella," Lenora (Maggie Pierce) takes a coach from Boston to her crumbling, isolated, seaside family mansion. She's there for one reason and one reason only: To reunite with her estranged father Locke (Price), whom she hasn't seen in twenty-six years. Sure, he's always sent checks to pay for her schooling, room and board, but otherwise he hasn't wanted a thing to do with her and she needs to know why. Upon entering the home, she's aghast at the state of the place. It's filled with cobwebs, dust and spiders, and looks to have been abandoned long ago. She's even more disheartened when she finds her father. He's not only a grumpy, unfriendly drunk but almost downright hostile to her. Seeing as how she had the coach drop her off there and has no one way back to Boston at the current time, they're going to be stuck together for awhile whether he likes it or not.


Locke blames Lenora for the death of his beloved wife Morella (Leona Gage), who passed just a few months after giving birth to her and blamed the baby for her illness. As a result, Locke grew to hate his own child and had to fight off the temptation to murder her as an infant ("I took you out of the cradle and almost hurled you out of the window!") Instead of going through with that, he opted to ship her off elsewhere to have someone else raise her. He also removed his wife's corpse from the grave and is currently keeping it in his bedroom! When Lenora reveals she has just a few months left to live, Locke finally comes around, asks her to stay and the two finally start getting to know one another. However, Morella's vengeful ghost returns and is intent on making their father-daughter reunion short lived.

Next up in the much more comedic "The Black Cat" and Lorre's cat-hating drunk Montresor Herrington has a few choice words for our titular feline. These include "beast," "repulsive creature" and "mangy, insufferable brute." He throws it, tries to smash it with a vase and threatens to kick it and tear its head off. Nope, he's not a fan of his wife's pet kitty at all. He's also not a fan of working or doing anything else remotely productive and has been chronically unemployed for seventeen years. As a result, he and his wife Annabel (Joyce Jameson) are in a bit of a financial pickle trying to survive on her sewing money and he doesn't help matters any stealing it all so he can go to a local tavern. After one such excursion, he gets thrown out, unsuccessfully attempts to to panhandle ("Can you spare a coin for a moral cripple?") and then stumbles into a wine merchant's conference.


Before they can throw the obnoxious old drunk out, he challenges the pretentious and prissy Fortunato Luchresi (Price), "the foremost wine taster in the civilized world today," to a wine-tasting contest. Both get wasted and do some hilarious facial expressions before leaving the place falling down drunk. Fortunato gets Montresor home, but he quickly passes out, giving Fortunato and Annabelle a chance to get to know each other. The two soon become lovers but when Montresor finds out what's going on, he plots revenge. That involves chaining both up in the cellar and then walling them in... but that's not the only thing he's bricked up behind the wall.

"The Case of M. Valdemar" (based on Poe's "The Facts in the Case of M. Valdemar) rounds out our collection. Ernest Valdemar (Price) is dying of an incurable disease but believes mesmerism is the key to easing his suffering and pain. He's thus employed the services of hypnotist and (he thinks) friend Mr. Carmichael (Rathbone), who accepts no money for his services but has gotten Ernest to agree to be mesmerized at the exact moment of his death so he can experiment on him. Ernest's wife Helene (Debra Paget) doesn't trust Carmichael and is against their agreement, while physician Dr. Elliott James (David Frankham) is also wary of him and finds it unconscionable to toy around with life and death.


When the time finally comes, and right at the moment of Ernest's demise, Carmichael turns on his color-flashing machine and manages to hypnotize Ernest. While his body is technically dead, his mind is still active and he's still able to communicate from the beyond without even moving his lips. He speaks of being in darkness and then surrounded by "multitudes of people." Helene and Dr. James plead with him to just let Ernest go, but he refuses. After all, he still has research to do. Months pass and, while his body deteriorates, Ernest is still in limbo between his Earthly existence and the afterlife. Carmichael tries to leverage his control over the body into forcing Helene to be his bride, which doesn't sit too well with Ernest.

"Morella," the shortest of the stories clocking in at just 20 minutes, feels a little basic, under-baked (another few scenes between Locke and his daughter would have helped flesh it out) and rushed at the climax, but it's redeemed somewhat by good art direction and sincere acting. The climax where the Locke home goes up in flames features recycled footage from Corman's Usher. "The Case of M. Valdemar" is a fairly well-executed and acted treatise of a genuinely fascinating premise which provides some effectively creepy moments. However, "The Black Cat" was the big standout for me. This has hilarious performances from Price and (especially) Lorre and the horror content is also fairly potent. There's a bizarre nightmare sequence where Price and Jameson rip off Lorre's head and throw it around like a ball and even stranger hallucinations that feature an iguana, tarantulas, snakes, an alligator and, uh, crabs and a lobster. Great stuff! 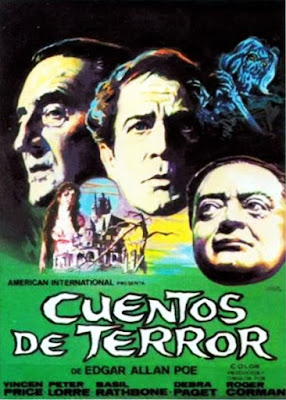 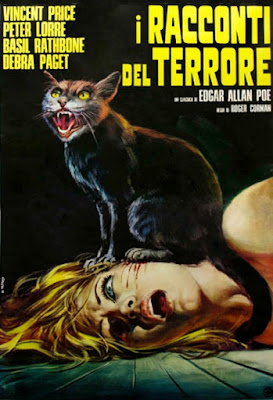 The film's box office success prompted AIP, Corman and company to make their next Poe film - The Raven (1963) - more comedic in tone just like the "Black Cat" segment and they even brought back both Price and Lorre to star in it. AIP then made their third horror-black comedy, The Comedy of Terrors (1964), which had Price, Lorre, Rathbone and Jameson, plus Boris Karloff, and was directed by Jacques Tourneur.