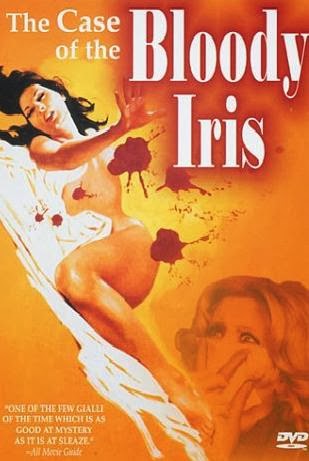 
In a high rise apartment building, a miniskirt-clad "high class hustler" (Evi Farinelli) is stabbed and slashed to death by a gloved maniac while on an elevator in a scene some viewers have likened to a more famous sequence in Brian De Palma's Dressed to Kill (1980). Both feature ladies getting killed in an elevator by a psycho whose identity has yet to be revealed immediately after having sex. The difference? Well, one features actual suspense leading up to the murder, the element of surprise about a would-be lead character being unceremoniously dispatched earlier than viewers anticipate and is well-edited and beautifully shot and scored, while the other is, well, none of the above. I'll leave it up to you to decide which is which.

After the murder, three tenants living on the top floor; retired university music professor Mr. Isaacs (George Rigaud), elderly war widow Mrs. Moss (Maria Tedeschi) and nightclub performer / stripper Mizar Harrington (Carla Brait), discover the body and none seem overly concerned about it ("I gotta go now. Gotta be at rehearsal in an hour!") Meanwhile, at a photography studio, flamboyant fashion photographer / modeling agent Arthur (Oreste Lionello) is busy shooting topless photos while barking out orders in an annoyingly stereotypical queeny / whiny voice. Architect Andrea Barto (the handsome but flagrantly untalented George Hilton) shows up looking for a model to use in a campaign and Arthur suggests Mizar. Why? Well, according to him it's because she's "black... but not too black." While there, Andrea bumps into the photogenic though troubled model Jennifer Lansbury (Edwige Fenech; the then-girlfriend of producer Luciano Martino), who's just recently fled from a sex cult. The two immediately become smitten with one another.

Later that night, Andrea goes to Mizar's nightclub to watch her routine, which involves wrestling men in a frilly bikini for three minutes. If the male wins he can take her right then and there in front of the other guests. If she wins, well, I guess she's earned her paycheck. Sounds like a fair trade-off to me. Andrea doesn't get a chance to talk to her about his business proposal that night, nor does he get to talk to her the following night after she's tied up and drown in her bathtub. Now with a vacant unit, Andrea (coincidentally also the owner of the building) hooks Jennifer and her bimbo model friend Marilyn (Paola Quattrini) up with a new place to stay. I don't know about you, but I'd be a little leery moving into a apartment where two women were just murdered by a maniac still on the loose, but neither seem to really mind.

Their first night there, Jennifer is awoken in her sleep by the psycho's hands wrapped around her throat but he miraculously disappears right afterward. Time to move yet? Nope. Go to the police? Can't have that. Not only is there a killer on loose, but Adam (Ben Carra), Jennifer's red herring "celestial husband" from her sex cult days shows up, threatens her with a syringe, breaks into her apartment, rips her clothes off and tries to rape her. Move? Police? No and no. It isn't until Jennifer is almost raped a second time, killed a third time and she finds Adam dead in her closet with a knife sticking in his stomach that she finally goes to the cops. And when she does, the Commissioner (Giampiero Albertini) promptly informs her "I'd like you to keep living in that house... but I'm sure it would be worth the risk." Oh please!

As par for the course in these films, nearly everyone is made out to be a suspect by the most idiotic means imaginable until they get bumped off. Andrea is something of a pathological liar. He owns the apartment where the murders are taking place but claims he's never actually been inside the building before (seriously?), then later contradicts himself. He lies about not knowing Mizar (who is referred to primarily as "that negro girl" by the cast after her murder), but previously had gone out to dinner with her. During another scene, Andrea hauls off and violently slaps Marilyn in the face for simply trying to scare him, which doesn't seem to bother her all that much since she's chipper and bubbly a second later. Andrea also claims to have a "phobia of blood," so he can't be the killer, right? Uh huh.

Jennifer and Marilyn's new neighbors are all weirdos. Mrs. Moss has a thing for gory horror magazines and can be heard talking to someone through the walls, though she claims to live alone. Professor Isaacs happens to own the same coat as the killer and seems to always be entering and exiting his apartment right after the murders. Isaacs' lesbian daughter Sheila (Annabella Incontrera) is also around trying to hit on anything in a skirt. Like many other films from this era, this seems to be trying to equate homosexuality with mental disorder by making Sheila out to be a suspect simply because of her sexuality. A lot of time is also wasted on the Commissioner, who steals mail from the crime scenes for his stamp collection (what a pro!) and his goofy sidekick Lorenzi (Franco Agostini), who's around primarily for comic relief.

Perhaps as much as any other movie in its subgenre, Bloody Iris is going to appeal only to diehard and very forgiving giallo fans. It's hard to tell how big of a role the horrid English-language dubbing plays in its idiocy, but the acting, plot and dialogue are all amazingly terrible. After she's stalked, assaulted multiple times and nearly raped and murdered, Andrea nonchalantly encourages Jennifer to "Try to put the whole thing out of your mind." Yeah, sure. I'd even be able to forgive many of these dumb-dumb moments if this contained good music, creative camerawork, lots of sleaze or an interesting story, but the film is also sorely lacking in those areas, too. Though the photography is competent, it's never especially colorful or creative. One 360 degree spin around a room, constant zooms and a kaleidoscope shot during a flashback sequence are hardly anything new. Bruno Nicolai's score is both repetitive (the same track seems to loop endlessly over and over again) and too upbeat; extinguishing any chance for suspense or terror... not that the dialogue and "comedy" didn't already do that. The sleaze quotient is minimal. Violence is mild even for this subgenre and though there are some classy unclothed shots of the beautiful Fenech, you can see her nude - and more nude than she is here - in many other, better-made films.

Worst of all is this film's astounding disregard for coherence and basic logic. I know many horror films, particularly of this type (or the later slasher flicks) are burdened by idiotic plots and moronic character actions that we are supposed to just ignore, but this one is just plain insulting to anyone's intelligence. Aside from what's already been mentioned, there's a stabbing in broad daylight in a crowded public square that no one seems to even notice until the victim keels over dead in the street. Andrea just happens to be there and the victim randomly happens to stumble right into him and rub blood all over his jacket. Andrea also just happens to be in the apartment's boiler room when another murder occurs. When Jennifer wants to break into a neighbor's apartment, she simply uses her apartment key to access theirs (!?) When she visits a junkyard, a door opens by itself, a hood shuts by itself and a 2000 pound car topples off a stack of other cars all by itself for no apparent reason aside from the director's desperation to provide some cheap jump scares. At the end, Jennifer randomly hits buttons to stop an audio tape and ends up accidentally hitting the record button so that the killer's entire confession is taped. How convenient! These moments of ridiculous coincidence just keep occurring over and over again right up to the finale, when the psycho's identity is revealed and he/ she claims to have killed to "protect" another character... a character they've already killed!

Originally titled Perché quelle strane gocce di sangue sul corpo di Jennifer? ("What Are Those Strange Drops of Blood Doing on Jennifer's Body?"), Bloody Iris was issued on a giallo box set by Anchor Bay, which also includes the films Short Night of the Glass Dolls (1971), Who Saw Her Die? (1972), both from director Aldo Lado, and Antonio Bido's The Bloodstained Shadow (1978). Director Carnimeo (known primarily for spaghetti westerns) also made the subpar Ratman (1987).