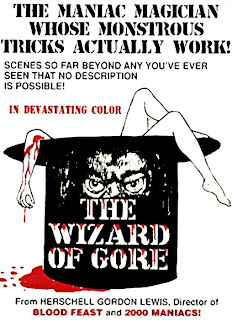 Montag the Magnificent (Ray Sager) performs a popular Grand Guignol-style magic act where he brings an unlucky lady or two up on stage, straps or ties them down and then brutally murders them before a live, possibly hypnotized audience. What everyone in the crowd sees is torture, agony and bloody bodily dismemberment, but the "victim" manages to ultimately walk off-stage completely clean and completely unharmed... at least for the time being. Soon after, each of the female volunteers die under mysterious circumstances in the exact fashion they died on stage. There's the woman-sawed-in-half chestnut (utilizing a chainsaw), a spike driven all the way through a head, eyeballs poked out, a punch press through the gut and some messy sword swallowing. While the cops investigate, Montag makes sure his tracks are covered by sneaking into the morgue and stealing the corpses. Talk show host Sherry Carson (Judy Cler) and her detective boyfriend Jack (Wayne Ratay) become regulars at Montag's show and start looking into things. Sherry even arranges for him to appear on her popular TV show "Housewives Coffee Break."

Well, I'm not going to sugarcoat it. This was my least favorite of the five schlock-gore films I've seen from Lewis so far. Maybe I wasn't in the mood for it. Maybe I never will be. Call me crazy, but if I'm going to sit through something horribly acted, horribly written, horrible edited and horribly made, I at least want it to make sense. The premise itself is admittedly a fairly clever way to set up all the gore murders (which are the only reason to see this), but all the "reality vs. illusion" bull this one tries to pull out at the very end was just flat out annoying. To me, it felt like various story points were laid out that would require some clarification later on, and then they took the the easiest, laziest possible way out. However they word it, it essentially boils down to a frustrating "it was all just a dream" equivalent in the very end. Then again, when things are as inept and nonsensical as they are here, all it takes it throwing in a couple of camera swirls and you're suddenly being praised for being a surrealist.

Montag himself is extremely grating and extremely loud. Not only are his redunant monologues flat out boring to listen to, but he's asked to overenunciate every other word as if he's trying to make sure people two blocks down the street can hear him. The other actors are dreadful and there's not a single likable or charismatic actor to be found in the entire film. I know that bad performances can be found in all of Lewis' movies, but there's a difference between endearingly amateurish and obnoxious. I just didn't find much of the charm here that I found in some of his better offerings.

The gore sure does hit the spot at times though, so I can at least give it that much credit. The effects (concoted by the director, assistant director Allison Louise Downe and Robert Lewis) are often cheap-looking and shoddy (obvious mannequins, shifting wigs...), but when they work, they're suitably nasty. Montag also likes to gleefully play around with the brains, eyeballs, innards and the blood of his victims. Filmed in 1968 but not released until two years later, Wizard not only went on to inspire the bad taste cult hit BLOODSUCKING FREAKS (1976), but was also remade in 2007 starring Crispin Glover as Montag. The newer version is actually far less gory than the movie that inspired it.

Many labels (Continental, Midnight, Rhino...) issued this on VHS throughout the 80s. Something Weird eventually picked up the entire Lewis catalogue for distribution on DVD, and gave this one a special edition release. It's also available on a Lewis box set.

Posted by The Bloody Pit of Horror at 10:40 PM No comments: