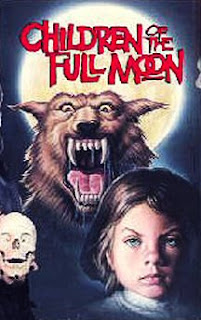 ...aka: Hammer House of Horror: Children of the Full Moon

Directed by:
Tom Clegg
*I've decided to include all thirteen episodes from the short-lived TV series "Hammer House of Horror" on this website. There are two reasons for this: 1.) Each episode runs 50 minutes and is in essence a feature (short films technically clock in at less than 45 minutes). 2.) More importantly, in the mid-1980s each episode was released separately on video by the ThrillerVideo label and was further padded with commentary from horror hostess Elvira. Since these were very well distributed titles, and in keeping with the video-store feel of the website, I felt it important to keep these titles in the database and review them all individually.*
.
A newlywed couple, Tom (Christopher Cazenove) and Sarah Martin (Celia Gregory), have car problems and end up stranded alongside a road leading through the country. They find a path, and eventually a gate, that leads to a large isolated home deep in the woods. Inside they find an elderly, jovial old lady named Mrs. Ardoy (Diana Dors) and a slew of young, weird children. She claims there are eight, but I counted ten. Things start harmless enough as Mrs. Ardoy invites them in and let's them use her phone. She gives them wine, feeds them a meaty meal and then lets them spend the night (no one's able to tow their car until the following day). As night falls and the full moon rises, odd things begin happening. The kids act even stranger, there's howling in the woods, Tom is attacked by something outside when he goes to fetch their luggage and later on that night Sarah sees a werewolf-like creature sitting outside her window. She's also attacked after Tom takes a tumble out the window and is knocked unconscious. The next day, Tom awakens in a hospital bed to find his wife by his side. Both seem to have hazy memories of that night. Eight weeks pass and she breaks the news she's pregnant. But Tom notices Sarah doesn't seem like herself, packing her overnight bag about seven months early. She's also less gentle, much more aggressive and starts craving raw meat... Hmmm... A slight below-average episode in this series and a little too predictable, but there's at least one good shock, decent acting and it's attractively photographed.
★★
Posted by The Bloody Pit of Horror at 12:04 AM No comments: