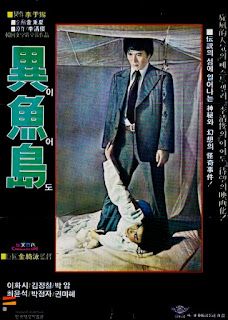 
Contractor Woo-hyun (Jeong-cheol Kim) comes up with the idea for a potentially profitable resort, which he plans on naming Hotel Ieodo, after a sacred island that may or may not actually exist. Ieodo, supposedly the place where the souls of those who've died in the ocean (fishermen, diving girls and sailors) go to find peace, is steeped in local legend and superstition. For starters, some believe you can't even see it unless you're already dead. Others believe that you can see it, but you'll die soon after if you do. Woo-hyun's company organizes a boat trip for employees and the press. Once they let the cat out of the bag about using the name Ieodo for the resort, reporter Nam-suk Chun (Yun-seok Choi) becomes hysterical and demands they turn the boat around. Out of the blue, Chun loudly announces to everyone that Woo-hyun is going to try to kill him. To try to pacify him, Woo-hyun challenges him to a drinking match instead. Whoever passes out loses. But a drunken Woo-hyun awakens to find the reporter nowhere to be found. In fact, he's no longer on the boat at all.


Did Woo-hyun throw him overboard while in a drunken stupor? Did Chun accidentally fall in? Or perhaps commit suicide? Another possibility, if the locals are to be believed, is that something supernatural is going on. The ship's captain even notices strange behavior in both the weather and the weight of the boat, which felt as if it was floating in the air.

Once the boat docks, Woo-hyun finds himself in a prickly situation. He's interrogated by the police, who aren't so convinced of his innocence but have no choice but to let him go as they have no concrete evidence. The newspaper where Chun worked all but implicate him in a murder and don't hesitate to make that known to the public. However, locals from Cheju, the secluded, superstitious and sparsely populated island where Chun was born and raised, believe he was merely doomed to die as a similar fate befell three of his forefathers. The locals believe he's been "taken away" by what they call "the water demon." Convinced Chun took his own life, Woo-hyun sets out on a quest to find out more about him. And, of course, that involves a trip to Cheju, where he gets much more than he bargained for.

Along with Chun's former boss, Yang (Am Park), who senses an interesting story brewing, Woo-hyun travels to Cheju. The two men then go from person to person, finding out bits and pieces about Chun as they go. We get a series of flashbacks with each new person. They're first directed to a rocky, mostly unpopulated area and to a "witch house." There, an older female shaman (Jeong-ja Park) tells them about the destruction of Chun's family. After surviving a boat crash but supposedly laying eyes on Ieodo Island first, the father vanished into thin air right before Chun and his mother's eyes. The mother was then ripped off by an exorcist and committed suicide. However, the exorcist's daughter, who had a crush on Chun, stole the money back to help him escape to the mainland. She was rewarded for her troubles by being tied up on the rocks and left for dead. It appears Chun wasn't a very nice guy.


The next visit is to Choon-kil Ko, a hooligan Chun met while living on the streets of Seoul. After Chun ripped him off, Choon-kil decided to come to the island in hopes of living off the back(s) of one or more of the hard-working diving girls. And that he has, except he's made most of his money functioning as a hired stud for all of the island's lonely women and widows. Since island custom has it that the females are to remain on Cheju while any male born there is sent to live on the mainland as soon as possible or else face the water demon, Choon-kil has found a lot of vulnerable and desperate ladies to take advantage of. After failing to create a stable life for himself in the city, Chun returns to the island himself to follow suit.

Yeo-in Park (Mi-hye Kwon), the infertile woman Chun first latched onto upon returning, is the next person the men visit. Doing various experiments on sea shells that he thinks will make him rich, Chun quickly ran through all of Yeo-in's savings. He then forced her to beg other women on the island for a loan. When that didn't work, he beat her and encouraged her to just steal money. Just as things were looking hopeless, a cloaked woman concealing her identity showed up to offer Yeo-in a loan. The stipulations? She's to sign a contract and if the money isn't paid back by a certain time, Chun comes to live with her. After their investment is ruined and Chun is caught having an affair, the old woman shows up to collect what's due and the financially-ruined Yeo-in hasn't seen him since.

By the time all's said and done, what exactly happened to Chun on the boat isn't the only, or even the most important, question that arises. There are others, like how did someone as disreputable and unqualified as Chun end up at Yang's newspaper? And what kind of effect has the increase in pollution and sewage dumping had on the lives of those living on the island? And what gives with the beautiful and mysterious barmaid Min-ja (Hwa-shi Lee), who seems to be on the periphery of everyone else's story and has a few interesting ones of her own? And, lastly, what lengths would the lonely women of Cheju go to get pregnant?


There are a lot of things going on here that instantly bring to mind the Brit classic The Wicker Man (1973). There's the isolated island setting. It deals with a small community who live by their own set of rules and laws, have their own concept of morality and possess unique spiritual beliefs; many of which are informed by their natural surroundings. There are bizarre ocean-front ceremonies and colorfully costumed people marching along the hills and coastline. And it throws an oblivious male protagonist into the middle of everything as he tries to investigate a disappearance / possible death. Only this is darker, slower paced, much more somber and without any humor.

The picturesque location work, striking shot framing and bold, symbolic use of color (mostly blues and reds) all manage to impress. And considering all of the bizarre characters, flashbacks and different plot threads / points of view utilized here, this hard-to-pigeonhole film, which is about equal parts drama, mystery and horror, is pretty impressive in how it weaves everything together by the end. And what an end it is! I'd like to think I've seen just about everything, so it takes a lot to genuinely shock me, but the finale here managed to do just that! It's even more surprising in that this was made by one of Korea's most well-respected, commercially successful and influential directors.


Based on the 1974 novel of the same name by Chung-Joon Lee (adapted by Yu-sang Ha), this was an entry in the 28th Annual Berlin Film Festival yet didn't get wide international distribution. (I'd say the ending had a little something to do with that!). Korean Film Archive / Blue Kino now offer this on Blu-ray with optional English subtitles. Their release comes with a load of extras, but only a few of those (one of two commentary tracks and an interview with the main actress) have English sub options. The second commentary track, several Q&As, a reproduction of the script and other extras are only in Korean.