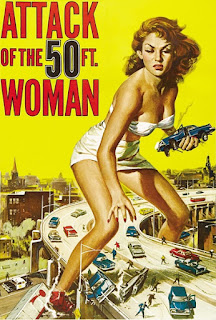 
Poor Nancy Archer. Sure, she's worth 50 million bucks and owns the world's largest diamond ("The Star of India"), but she's saddled with far more problems than your usual pampered California socialite. Nancy (Allison Hayes) has already spent some time in a private institution for mental issues, suffers from violent headaches and also has a bad drinking problem, all of which she's trying to overcome with help from the compassionate Dr. Isaac Cushing (Roy Gordon). Unfortunately, she has other forces conspiring against her: namely her greedy, no-good husband Harry (William Hudson), who is only with her because when they'd previously separated he "couldn't pry a nickel out of her," and his sexpot mistress Honey Parker (Yvette Vickers). The adulterous duo are first seen discussing how to finally rid themselves of his pesky wife. They decide to exacerbate her mental condition ("Once she's in the booby hatch, throw the key away!") so they can get their hands on her money.


During a night out, a jealous Nancy storms out of the bar when she sees hubby and Honey flirting and goes for a drive. At the same time, a large, meteor-like object, previously seen hovering over the skies in Europe and Africa, finally makes it way to California and lands right on the road. Nancy almost hits it, gets out of her car in a panic and runs off into the desert when a giant floppy hand reaches out toward her. 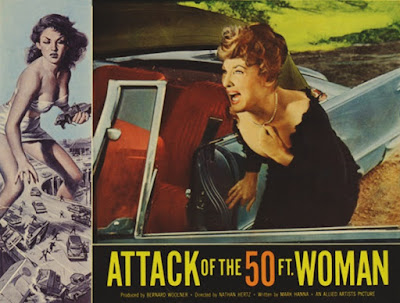 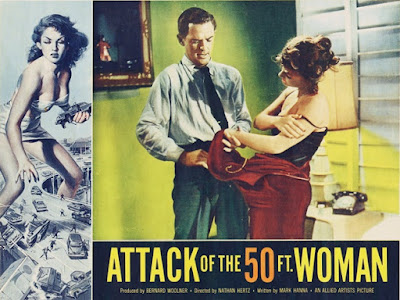 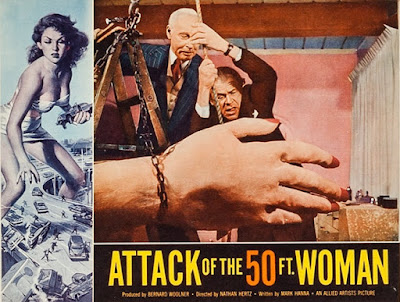 A frantic Nancy arrives back in town but when she, the local sheriff (George Douglas) and his goofy deputy (Frank Chase) return to where she abandoned her car, there's no sign of the giant golf ball-looking spaceship or the 30-foot-tall alien being she claims she saw. Nancy returns home and tells her story to her husband, who brushes her off, gives her some sleeping pills and sends her to bed. Overjoyed she seems to be cracking up once again, Harry goes to report his discoveries to Honey. The two call Dr. Cushing, hoping he'll commit her again but the doctor recommends Harry just be nice and supportive and Nancy'll get better.


Insistent on proving she's sane, Nancy forces her husband to accompany her to the desert to look for the saucer. After driving around all day, the two finally come across it, as well as the giant. Doing what all good husbands do, Harry takes off and leaves Nancy at the whim of the alien. He gets into an altercation with Nancy's loyal servant Jess (Ken Terrell) when he returns to the home, then decides to go get Honey so the two can split town. Both, however, are apprehended by the police for questioning and forbidden to leave. 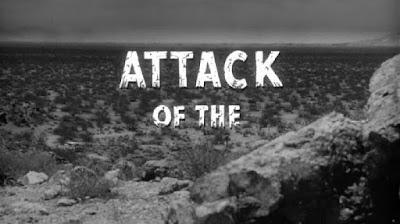 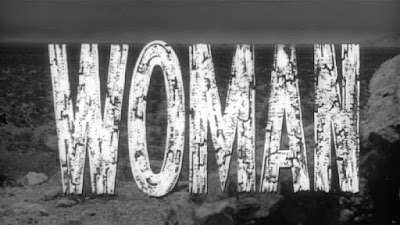 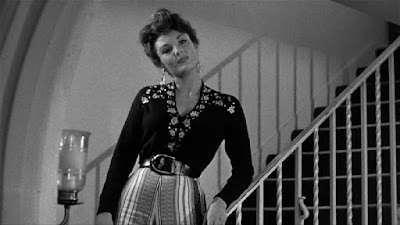 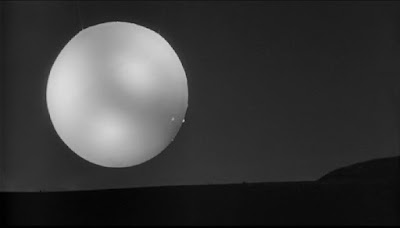 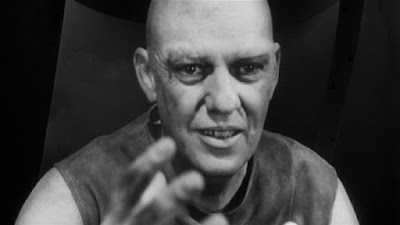 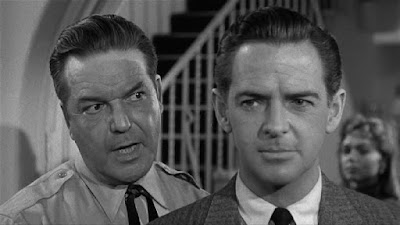 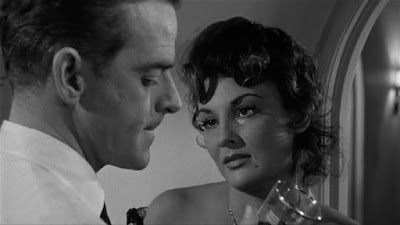 Nancy mysteriously reappears back at her home, only she's out of it, has strange scratches on her throat and is also highly radioactive. Despite being in a coma, she keeps on growing... and growing... and growing... Dr. Cushing places a special order for chains, 40 gallons of plasma and an elephant syringe to care for his newly-oversized patient. The Sheriff and Jess follow giant footprints from the home all the way to the spaceship. Once inside they discover the alien has taken possession of Nancy's Star of India necklace and is using it to operate the ship. The two barely escape from the alien, who picks up their car and throws it before taking off. Back at the Archer residence, Nancy finally awakens in hysterics. All she wants is her "miserable parasite" of a husband, but naturally he's off at the bar drunk and messing with Honey. What's a spurned giantess to do other than go to the bar and tear the roof off the place? 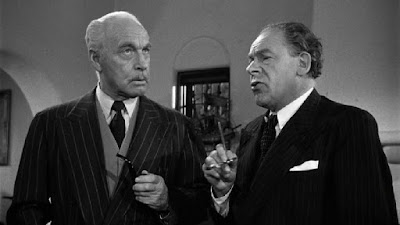 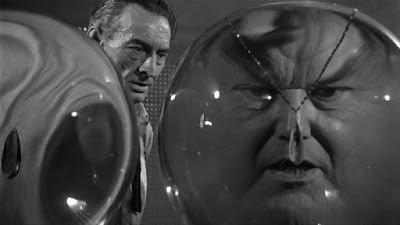 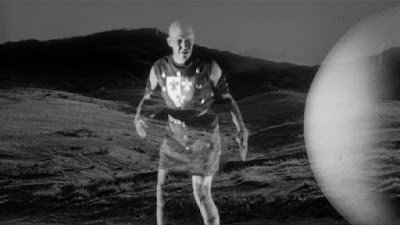 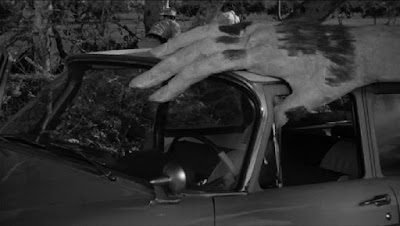 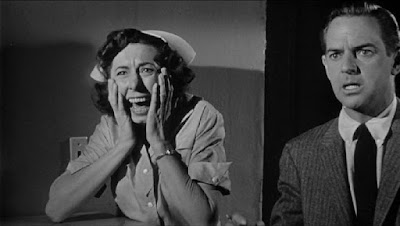 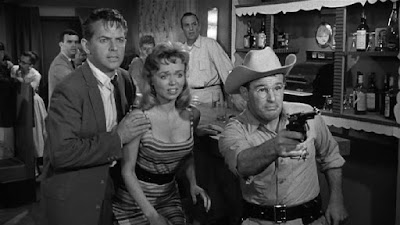 Boasting really awful special effects, a silly premise and a memorably schlocky title, this went on to become a favorite of bad movie devotees. While amusing at times, it's actually pretty average / ordinary for the budget / era. This is undoubtedly lead actress Hayes' most iconic role, but it's hardly her best. She spends the first 25 minutes behaving like a drunken bitch, is out of the film for the entire mid-section and then reemerges during the last 7 minutes with an echo voice pining for her beloved Harry. The 50-foot-woman's rampage involves escaping through the roof of her home, tearing down a utility pole, scaring a couple of necking teenagers, busting out a window and, finally, crushing the mistress with a board and picking up a (very poorly scaled) Harry doll, who goes down when she finally goes down. Wires holding up the spaceship can easily be seen numerous times. 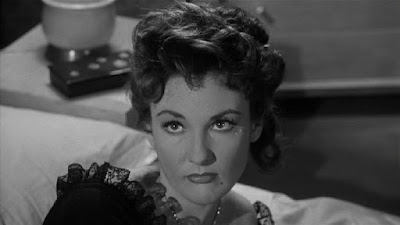 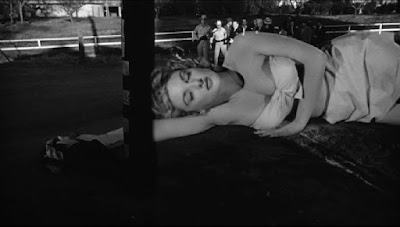 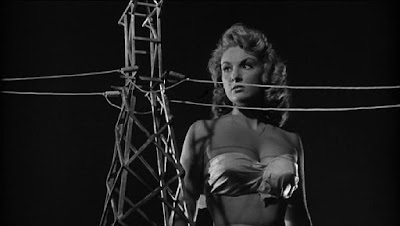 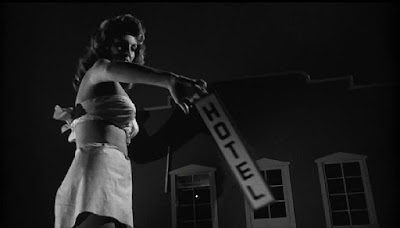 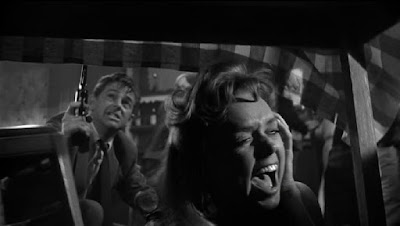 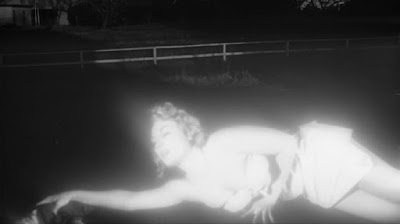 Prior to this, director Nathan Juran (billed as "Nathan Hertz" here; reportedly out of embarrassment) had made several solid genre films, such as THE BLACK CASTLE (1952) with Boris Karloff and Lon Chaney Jr. and the sci-fi favorite 20 MILLION MILES TO EARTH (1957). The screenplay was from Mark Hanna, who'd co-written (and carried many ideas over from) the similar THE AMAZING COLOSSAL MAN (1957). It played theatrically on a double bill with WAR OF THE SATELLITES (1958). 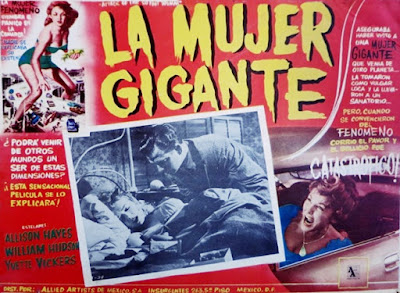 A made-for-cable (intentional) comedy remake directed by Christopher Guest and starring Daryl Hannah was released in 1993 and there have been numerous spin-offs, such as Fred Olen Ray's Attack of the 60 Foot Centerfold (1994) and the more recent Attack of the 50 Foot Cheerleader (2012). Premiere Magazine ranked this #8 on its list of "25 Best Movie Posters Ever."