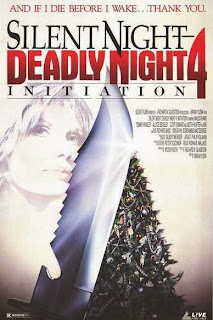 
I've always liked Brian Yuzna, despite the fact his resume is all over the map. Though he's been involved in mostly mediocre movies (and some downright bad ones), he'll occasionally take everyone by surprise by turning out a real gem. Aside from his creativity, I think what I enjoy most about the guy is that he seems to possess a great deal of humility and isn't some huge egomaniac who thinks everything he touches is golden like many of his contemporaries. In an October 2013 interview with Phil Wheat, Yuzna categorized himself as "...someone who has made a lot of horror movies that I wouldn't characterize as 'really good.'" In the same interview he pretty much nails the stale state of contemporary genre fare: "Horror has become so mainstream that it seems to have mostly lost that transgressive creativity that used to make it so exhilarating." Yuzna (who was born in the Philippines but later emigrated to America) started out very strongly on the scene in the mid-80s, producing the cult favorite RE-ANIMATOR (1985) and producing and co-writing FROM BEYOND (1986); both loose H.P. Lovecraft adaptations for director Stuart Gordon. Yuzna's directorial debut came in 1989 with the successful and highly imaginative SOCIETY (1989). That same year he helmed the middling sequel Bride of Re-Animator and soon after that landed this gig. Uneven as SNDN4 undoubtedly is, one has to give Yuzna some credit for at least attempting to do something different. 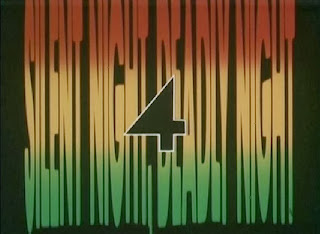 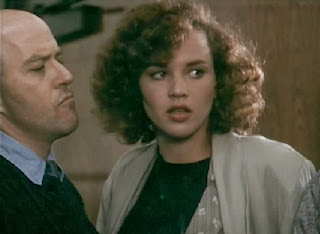 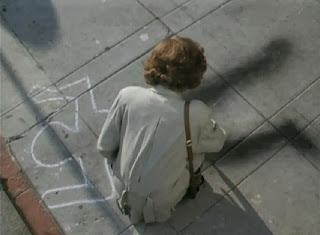 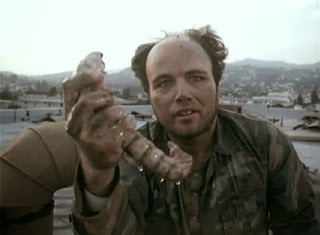 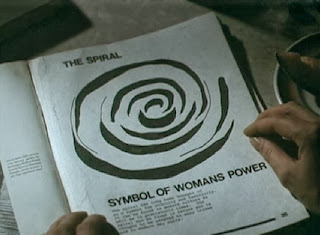 Unlike the three films preceding it, each of which involved a "Santa Claus Killer" (first Billy and then his brother Ricky), Part 4 goes a completely different direction much like HALLOWEEN III: SEASON OF THE WITCH (1982) ditched the Michael Myers routine for a brand new supernatural horror story set on the same holiday. There's no killer in a Santa suit here (aside from on a TV set) and it's not a slasher flick. It also happens to be completely bonkers! Things begin with a woman whose lower half is engulfed in flames falling to her death from a rooftop. The victim's identity is unknown and there's no explanation behind her death, leaving the murder cold. Kim Leavitt (former model and Richard Gere squeeze Neith Hunter), who works for "The L.A. Eye" newspaper usually doing their classified ads, wants to be taken seriously as a journalist, so she insists on doing an investigative story on the mysterious death. After some persistence, she's finally able to convince her boyfriend, fellow reporter Hank (Tommy Hinkley), into sweet-talking their sexist boss Eli (Phantasm series star Reggie Bannister) into giving her the story. 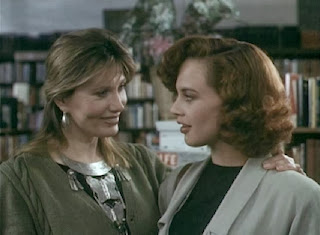 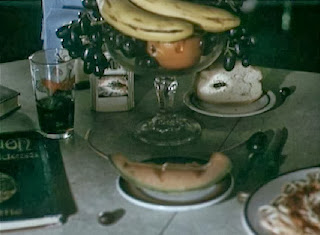 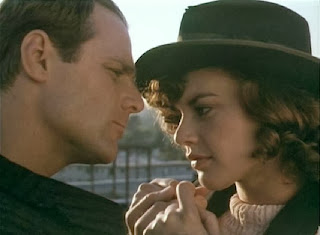 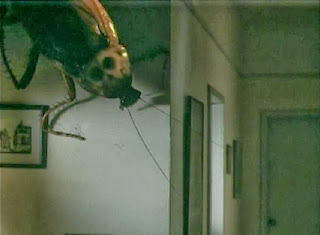 Kim goes to where the woman had died and discovers the building is owned by the glamorous Fima (Maud Adams), who also runs a bookstore out of the building. Fima, who's extremely touchy-feely right from the get go, gives Kim a giant fig to eat and a free book entitled "Initiation of the Virgin Goddess" before inviting her to a picnic she's having with some lady friends. Immediately after, tons of strange things begin happening. Kim sees a spiral ("The symbol of woman's power") in a plate of spaghetti and notices faces all over the place formed out of food, tree branches, etc. Her apartment becomes infested with bugs, including a king-size cockroach, and a strange, mentally-disturbed vagrant named Ricky (Clint Howard) seems to be stalking her. Fima doesn't really have anything nice to say about men. In fact, she despises them ("There seems to be this parasitic quality to men...") and seems to have sexual designs on our heroine. I guess I'll just let the cat out of the bag now: Fima is the leader of a lesbian witch cult who worship Lilith; biblically-speaking, Adam's first wife (who is reportedly in portions of the bible removed by the Catholic church). Since Lilith was made from the same dirt as Adam, she didn't have to take any of his shit, and these ladies seem to follow the same philosophy. 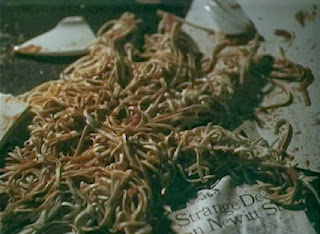 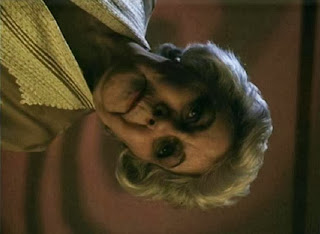 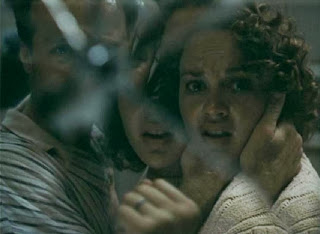 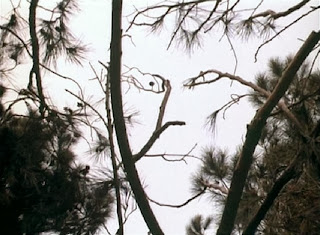 Kim is drugged and goes through an extremely icky ritual where she has a larva inserted into her stomach and vomits up a huge worm. Fima wants to impregnate her with her mutant "child," but Kim manages to escape before finishing the ceremony. She goes home, starts to lose it and tries to down a bottle of pills. Ricky sneaks into her apartment and, while she's in the middle of having sex with Hank, sits on the edge of the bed, turns on the TV and watches a scene from SILENT NIGHT, DEADLY NIGHT III (!!) Kim is eventually dragged back to the cult, where she has to go through a second and much more horrifying part of the initiation. What could be more horrifying than yakking up a giant bug, you ask? How about having Clint Howard rape you while wearing a dildo-nose mask while a bunch of old women slather him with oily goo? The finale explodes with a bunch of surreal, rubbery, body-twisting fx courtesy of Screaming Mad George which are similar to what he did for Society, only on a smaller scale. 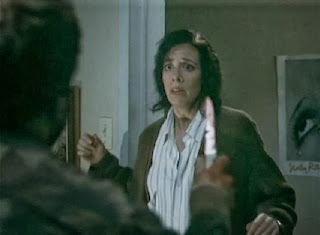 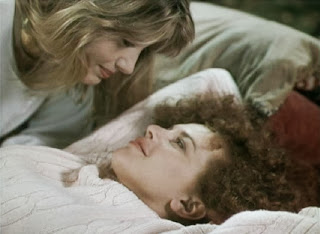 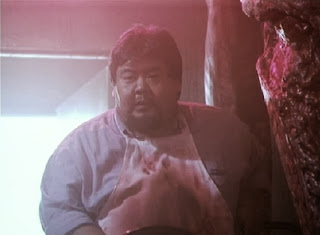 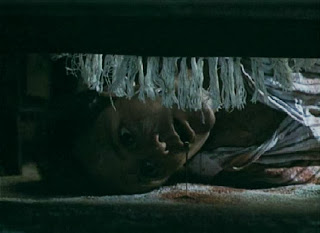 I'm not quite sure what point the filmmakers were really trying to make here but it's pretty obvious they were attempting to convey some kind of allegorical message. There's an extremely strong and extremely odd anti-feminist theme that runs throughout. Kim becomes loud, shrill, demanding and unreasonable once she starts getting involved with the cult. It's clear that these women are a bad influence on her and she's even told at one point that the only way to become a "whole woman" is by killing a man. When a man is killed, it's no big deal to these ladies because he's "just a man." The only guy the cult has any use for is the slow-witted Ricky, and they use him specifically to do their dirty work. That could be viewed as either them being too weak to do the physical stuff themselves or them being too smart to be risk implicating themselves.

On the flip side, the men in this film are far from sympathetic and all of the guys Kim works with are smarmy, sexist creeps. At her job, the only way Kim is able to advance her career is through the guy she happens to be sleeping with. In addition, a subplot involving Hank's father (Ben Slack) shows him to be yet another sexist asshole who's intolerant of Kim being Jewish and says that a woman's place is in the home. Maybe what this is really about is a career woman having trouble navigating a sane path; trying to avoid both a lesser position in a male dominated world and extreme feminism. It's is all very strange and muddled, but I'll gladly take the imaginative oddness on display here over yet another routine Santa slasher flick. 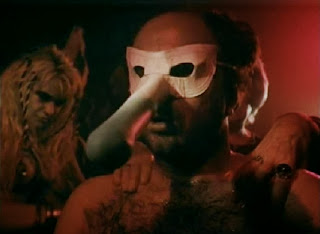 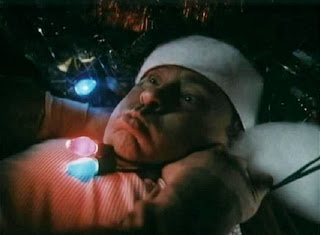 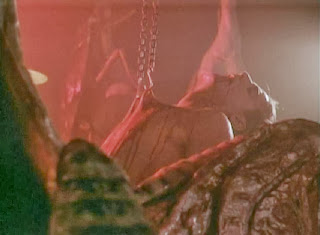 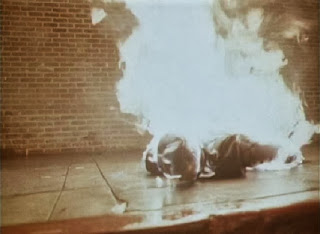 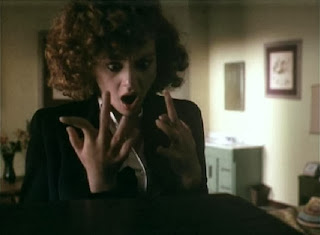 There's a plug for Psychotronic Magazine and the cast includes Allyce Beasley, Jeanne Bates (a regular in David Lynch films going back to Eraserhead), Marjean Holden, David Wells and Conan Yuzna (the director's son). The score is from Richard Band. Yuzna followed this one up with the mediocre Lovecraft-inspired anthology Necronomicon: Book of the Dead (1993) and the very good zombie sequel Return of the Living Dead III (1993). The fifth and final installment in the series was Silent Night, Deadly Night 5: The Toymaker (1991), which is again unrelated to what came before it.