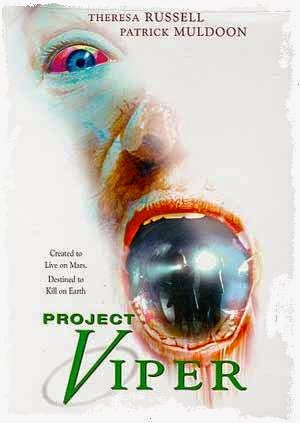 
Yes, this borrows ideas (and in some cases, actual scenes!) from a few other popular recent action / sci-fi films, but that doesn't make this boring. In fact, it's actually pretty entertaining overall. Astronauts aboard the spaceship Olympus, which is doing some work around Mars, have some major power surge problems right before they're about to do a live TV broadcast and are all presumed dead after contact with NASA is lost. It may have something to do with Project VIPER, an experiment mixing gene microbiology with computer technology and developed at Novagen Industries, a government run facility rife with corruption. Scientist Diana (Lydie Denier) is shot dead and replaced by an identical double who breaks into the lab, guns down a dozen or so people and escapes with the second VIPER prototype. She's involved in a plane crash near the Mexican border and the program, described by one character as "living, breathing acid," kills her and the pilot and escapes into the woods. Confused yet? Well I was too at first, but after the busy opening twenty minutes or so, this settles down quite nicely and becomes an entertaining little low-budget thriller, with horror and sci-fi elements.

The program creators; chief scientist Nancy Burnham (Theresa Russell), programmer Steve (Billy Keane), computer expert Sydney (Tamara Davies) and doctor Alan (Daniel Quinn), are teamed up with smart-ass, tough guy government agent Mike Conners (Patrick Muldoon) to stop the creature before it can multiply. Naturally, one of the five has intentionally tampered with the program and created a nearly unstoppable killing machine. Tim Thomerson has a nice supporting role as a cancer-stricken small town Springfield sheriff perplexed by the string of grisly murders in his town. The ever-growing creature impales and gobbles up victims whole, can mimic any molecular structure, is usually seen as a tentacled silver blob, leaves behind a metallic slime trail wherever it visits and hangs out in the small town because of the high uranium content in the water supply, which has also led to a high cancer rate in the town. Does that make this the horror movie answer to Erin Brockovich? Actually it sort of does now that I'm thinking about it; especially when Curtis Armstrong ("Booger" from Revenge of the Nerds) shows up as a lawyer trying to get the townsfolk to sue the city. Regular viewers of Cinemax may want to note there's also a brief appearance by buxom Ohio native Lorissa McComas in a small supporting role.

Though a bit hard to follow at first, the story is passable, there's plenty of action (and explosions) and some welcome comedy. The production values, acting and special effects are all pretty good and it is one of more professional offerings from 'B' kingpin Jim Wynorski, who for some reason uses an alias ("Jay Andrews") for what turns out to be one of his better films. For the record, the car chase sequence was lifted from Species (1995) and the airplane crash footage was recycled from Air America (1990); both of which are acknowledged in the closing credits. It debuted on the Sci-Fi Channel. 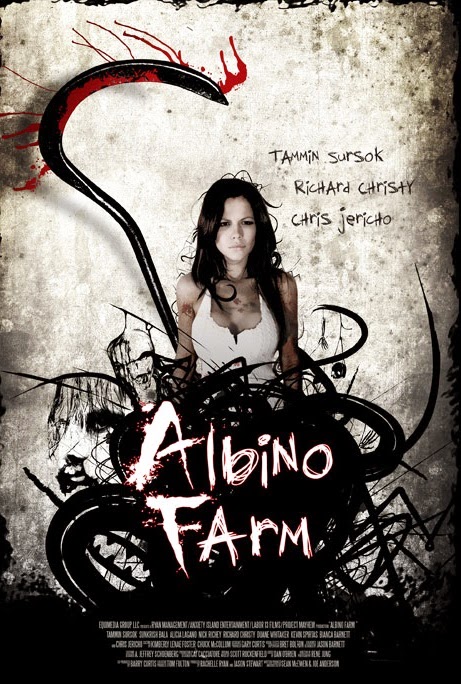 
Take a small handful of teens, put them in a desolate area somewhere out in the boonies away from civilization, destroy their means of transportation... and then unleash the killer hillbillies! This same exact formula has been used time and time again for such films as The Texas Chainsaw Massacre (plus sequels, remakes and sequels to remakes), The Hills Have Eyes (plus sequel, remake and sequel to remake), Wrong Turn (plus sequels), Cannibal Detour, The Undertow and countless others from the early 70s all the way up to today. Albino Farm is one of the newer additions to the subgenre and it sticks pretty close to formula. In other words, if you're already well versed in these kind of films, you've probably already seen bits and pieces of this one elsewhere. On the plus side, it's actually fairly well made for what it is. Though the budget isn't astronomical and the concept isn't exactly fresh, the filmmakers at least put together a competent film. The actors are all decent, the mutant makeup designs are good and they chose a good shooting location in one of those old-looking towns in the deep south (around Springfield, Missouri).

Stacey (Tammin Sursok), Sanjay (Sunkrish Bala), Melody (Alicia Lagano) and Brian (Nick Richey) are out on a road trip doing some kind of history class assignment. They encounter a dwarf using a spatula to scrape a smashed animal up off the road (yum!) and then a blind gas station attendant (Duane Whitaker) who tells them to read Leviticus 21:16 (hint, hint) before stumbling into a small town called Shiloh around dark. While there they discover that all of the townspeople are afflicted with either a deformity (hairlips, conjoined fingers, etc.) or a handicap (some are are blind, deaf and mute). They also learn about a local legend centering around a place on the outskirts of town called Albino Farm. The four naturally make the unwise decision of checking the place out and end up running into a batch of murderous mutants.

Kevin Spirtas (from Craven's awful Hills Have Eyes sequel) plays a tent revival preacher and pro wrestler Chris Jericho (who proves to be a decent enough actor with what he's given to do here) plays a hick who makes one of the girls flash her breasts for a ride. Some of the action takes place in a cave, the ending is surprisingly effective and every once in awhile there's an bizarre moment that catches you off guard, such as an elderly lady breast feeding a mutant baby or a pig-faced mutant woman in cut off shorts who does a strip tease before ripping out a guy's teeth with a hook. There's some shoddy CGI and annoying wobbly camera-work present, but thankfully it's not overused. Could have been worse; worth a look. It apparently floated around on the bootleg circuit for awhile as Wrong Turn 4. 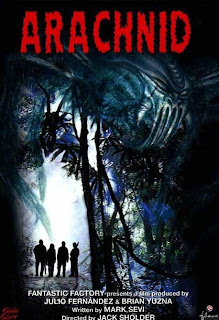 
This one kicks off on a decidedly odd note as a tunnel of water rises up from the ocean as a navy jet pilot chases down an invisible alien ship. Both crash land on a tropical island somewhere near Guam and both fall prey to a gigantic mutant spider. 10 months later, the dead guy's sarcastic sister Lauren (Alex Reid, who looks kind of like Jennifer Garner), also a pilot, gets a chance to fly a medical expedition to the same area and uses the chance to try to figure out what happened to her sibling. Also along for the trip are an asshole male doctor, a bitchy female doctor, the author of the book 'Arachnid Fun Facts,' a trio of heavily-armed macho men and some local guides who make for easy anonymous prey. While nearing their destination, there's a mysterious power failure and the plane crashes on the beach. Magnetic interference kills their chances of using the radio, and they must treck across the island to try to find some help. On the way, they pass through a nearly-empty native village, picking up a helpful sole survivor from there, and must survive attacks from a variety of big bug mutations (not just the insects of the title) that are quickly evolving into the "ultimate predator." There's also a caterpillar-like creepy crawler, something that shoots green acidic gunk that melts off flesh and some bloated ticks that crawl under one guy's skin and then out his neck in the stand-out gore scene.

The location work (it was filmed in Spain), production values, photography and acting are all above par and the special effects, which employ animatronics, model work and a little CGI, are very good. Some are by Steve Johnson and his crew. Brian Yuzna (Society) was one of the producers. 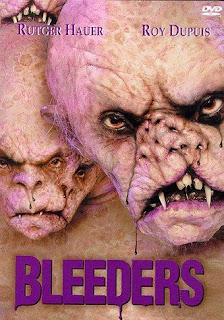 
Don't know if anyone remembers the original VHS box for this or not, but it had a packet of fake blood taped to the front and you could squish it with your fingers. You gotta miss that kind of showmanship now that VHS has become obsolete! Well anyway, back to the film...

A pale, terminally ill man (Roy Dupuis) arrives on a secluded Canadian island with his blonde nurse wife (Kristin Lehman) to trace his family lineage in hopes of finding a cure for his "degenerative congenital blood disease." Turns out he's actually a descendant of the incestuous Van Daam clan, whose keeping-it-in-the-family lifestyle has resulted in little, legless, rubbery, bright-light-hating monsters who lurk beneath dark catacombs and emerge with claw hammers to nosh the blood of townspeople. First off, you might expect better coming a from a film scripted by Dan O'Bannon (Alien) and Ronald Shusett (Total Recall), but there are several glaring plot holes and the premise, despite perverse sexual elements, is overly familiar. Though he receives top billing, Rutger Hauer is also wasted yet again as a boozy doctor. However, this isn't a complete washout and that's largely due to very good performances from Dupuis and Lehman, who make you believe in their characters and their plight, even though this thing is downright stupid much of the time. Watch for them in other things, but this Canadian horror flick - which seems partially influenced by the Lovecraft story "The Lurking Fear" - will be best remembered by me for that nifty box.