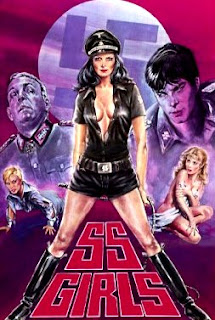 ...aka: Erotic Nights of the Gestapo
...aka: Private House of the SS
...aka: SS Girls
Directed by:
Bruno Mattei
Yet another low-octane sleaze-fest from Mr. Mattei; this one trying to capitalize on the ILSA-spawned Nazi Exploitation (or Nazisploitation) movement of the mid/late 7os. Though most movies of this type seem to try to outdo one another when it comes to dishing out humiliation, gory abuse and sexual torture to fully nude women, this one goes down a less violent route, opting more for the sex. Near the end of WWII, General Berger (Ivano Staccioli) commissions snivelling, impotent, completely unhinged SS officer Hans Schellenberg (Gabriele Carrara) to put together a plan to help weed out Nazi defectors. Hans gather together a small team; Madame Eva (Macha Magall), facially-scarred and sadistic Frau Inge (Marina Daunia) and standard mad doctor type Professor Jurgen (Alan Collins/ Luciano Pigozzi) to train a handful of whores into being able to seduce and milk secrets from Nazi officers. The conditioning period - shown in a hilarious montage of clips - involves dancing in the grass in leotards, passing a ball between their legs and being able to sexually satisfy all types... including a German Sheppard! Once the ladies have gone through training, they're able to provide such fulfilling sex to the officers they can't help but spill the beans. Afterward, they're executed as traitors.
.
A couple of minor subplots, including a half-assed love story between an officer (Vassili Karis) and a hooker (Tamara Triffez) who's later forced into having an abortion, as well as some recycled, poorly edited-in battle footage involving tanks (lifted from the 1973 Swiss film SHE DEVILS OF THE SS), manage to make their way into this tired tale, which completely wears out its welcome long before the finish. The film is badly written, badly paced and really struggles to find its tone, uneasily wavering between light and whimsical (believe it or not!) and crude and tasteless. It also drags on in a very dull and repetitive fashion at about the midway point and caps things off with a hilariously badly done suicide-orgy where drunken officers and hookers blow their brains without spilling so much as a drop of blood onto the floor. Surprisingly enough, a few of the actors (particularly an outrageously over-the-top Carrara and a cruelly sensuous Daunia) manage to make something of an impression here. The cast also includes Walter "Bigari"/Brandi and Eolo Capritti as officers, Gota Gobert and an uncredited Salvatore Baccaro (who played the title character in THE BEAST IN HEAT, which also featured Magall).
.
Originally released in America (to both theaters and VHS) in a cut version titled SS GIRLS; it is now available fully uncut on DVD from Exploitation Digital under the same title (at least on the box; the actual print uses the PRIVATE HOUSE OF THE SS alt. title). The full running time is 95 minutes; the censored versions typically run 82. Mattei (who used the alias "Jordan B. Matthews" here) and some of the same cast (Staccioli, Carrara, Daunia, Gobert...) would return for more Nazisploitation with Kz9 - LAGER DI STERMINIO (aka S.S. EXTERMINATION CAMP aka WOMEN'S CAMP 119) the same year.
.
★1/2
Posted by The Bloody Pit of Horror at 1:40 AM No comments: