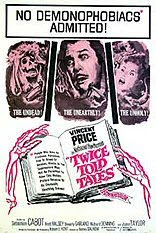 ...aka: Corpse Makers, The
...aka: Night of Terror
Directed by:
Sidney Salkow
A watchable, sometimes colorful, well-cast - though overlong, talky and set-bound - three-part anthology from the same guy who would go on to make the more-famous Price vehicle THE LAST MAN ON EARTH just a year later. All three of the tales here are based on the writings of Nathaniel Hawthorne (best known for his high school lit class staple The Scarlet Letter) and provide horror spins on everything from the fountain of youth to the touch of the death to the centuries-old family curse. Each story runs about 40 minutes, which is very close to being a feature-length film in an of itself, so in a way watching this is almost feels like watching three different complete films back to back. Unfortunately, thanks to leaden pacing and flavorless, almost anonymous direction from Sidney Salkow (Corman would have handled all this much better), this project never seems to fulfill its full potential.

Story #1 is "Dr. Heidegger's Experiment," which doesn't following the source story very closely and stars Vincent Price and Sebastian Cabot as elderly best friends who get a second chance at life. Kind Dr. Carl Heidigger (Cabot) is approaching the twilight of his life and was so entranced with the memory of this late wife Sylvia (Mari Blanchard), who died thirty-eight years, that he was unable to marry or move on with his life after her passing. Dr. Heidegger, along with his heavy-drinking best friend Alex Medbourne (Price), accidentally knock over Sylvia's coffin and find that her corpse has been perfectly preserved. Somehow the water that's been filtering through the ground to her tomb has the power to preserve life and restore youth. Both Carl and Alex drink the water and become young again, then inject the water into Sylvia and bring her back. Things don't smoothly however as the effects of the water prove to only last temporarily and some past secrets come to the surface that threaten to spoil the fortunate turn of events. Reasonably entertaining segment; Cabot steals it with his charming and sympathetic performance.

Next up is "Rappaccini's Daughter," which was by far my favorite of the tales. Price is an Italian scientist living in complete seclusion with his beautiful daughter Beatrice (Joyce Taylor). Handsome med student Giovanni (Brett Halsey) sees Beatrice from his balcony and instantly falls in love with her, but the closer he tries to get the further she pushes him away. You see, Beatrice cannot be touched, because she was an unwitting guinea pig to her father's experiments and now anything she comes into contact with smokes, withers, dies and becomes purple. It has something to do with a toxic plant and Price's character being scorned by a woman and going to great lengths to try to protect his own daughter from a similar heartache. Instead, he's all but ruined her life. A very intriguing little tale (which actually does stick close to the original story), this is well-done, interesting and comes with a nicely tragic ending, though there's not even the slightest attempt to make this feel like it's set in Italy and, once again, Price is relegated to more of a less-colorful supporting role.

Finally we have "The House of the Seven Gables," which had already been filmed several times at feature length, including once in 1940 with Price playing a completely different role. Here Vinnie gets to play the heavy - lecherous, greedy, abusive Gerald Pyncheon, who is driven back to his ancestral home after an eighteen-year absence because of gambling debts. He drags his lovely wife Alice (Beverly Garland) along and is confronted with hostility by his bitter sister Hannah (Jacqueline de Wit). Legend has it that there's a hidden vault somewhere on the premises containing millions, which no one has been able to find. The trouble is that the Pyncheon men all have a strange habit of dying in the same exact chair near a bleeding portrait. Hmmm... Richard Denning shows up as descendant of the Maulle family, who have a long-standing feud with the Pyncheon's over some land, and possibly more. Definitely the least successful of these tales, which is a shame because I love both Price and Garland to pieces and was looking forward to seeing them on-screen together. This tries to cram way too much plot into 40 minutes and becomes both dull and ponderous, though it does pick up a bit at the end with a surprising pick-axe to the head murder, a silly reanimated skeleton hand and a model of the home crumbling to the ground.

It's worth a look to fans, but there are much better examples of the anthology format out there, as well as much better usage of horror legend Price in dozens of other films, including the anthology TALES OF TERROR, release a year before this one.
★★
Posted by The Bloody Pit of Horror at 4:19 AM No comments: