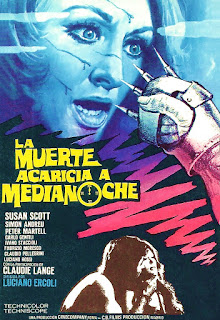 
Apparently always game for making some extra money, successful model Valentina ("Susan Scott" / Nieves Navarro) will soon regret allowing herself to be the guinea pig in an experiment with a mind-bending drug called H.D.S. and allowing her shady reporter "friend" Gio Baldi (Simón Andreu) write an article about her experiences. Gio promises Valentina complete anonymity in his article while the doctor, an expert in toxicology from the University of Milan, promises the intramuscular drug is completely safe. After the injection, Valentine first starts showing signs of drug-induced euphoria but that soon changes to horror as she's flooded with bloody visions of a man in sunglasses (Claudio Pellegrini) murdering a woman with an "armored fist" (spiked glove).


The following day, Val goes to work only to find out she's been fired. The "doctor" who administered the drug turns out to be an impostor and she'd been set up. Gio had taken photos of her while she was drugged and then ran a front page story in his sleazy tabloid rag Novella 2000 about her visions while under the hallucinogenic substance. To top off her great day, she finds herself also being arrested after angrily flinging a rock through Gio's window. Could things possibly get any worse? Sure. Even though everything else that transpired with the H.D.S. drug was a fraud cooked up to sell magazines, Valentina's vision of a mysterious murderer on the loose, while perhaps not entirely accurate, isn't entirely untrue either.

Valentina would prefer to forget all about it, but that isn't an option because whoever was responsible for the murder she saw then comes after her and several characters pop out of the woodwork to either stalk her or drop clues as to what's really going on. There are additional complications to muddy the waters even further. For starters, the crime Valentina saw occurred six months earlier in the apartment right across from hers. She may have seen the crime and repressed the horrific memory. Second, someone had already been arrested for that murder and is currently being housed at a asylum but it's not the same man from her vision. Third, another woman turns up dead and whose murder seems to be tied to the other but police have already written it off as a suicide.

Plenty of red herrings file in and out. There's Pepito (Fabrizio Moresco), nutbag friend of one of the victims, who slashes cat throats when he isn't stalking Valentina. And there's Verushka (Claudie Lange), wife of a sinister asylum doctor Otto Wuttenberg (Ivano Staccioli) and sister of one of the victims, who shows up from time to time looking into her sister's death and may also be crazy. Valentina's moody, self-centered artist pseudo boyfriend Stefano ("Peter Martell" / Pietro Martellanza) is in and out of the picture and isn't much of a support system. While Inspector Serino (Carlo Gentilli) tries to make sense of what's going on, he's also simultaneously investigating Hamburg drug smugglers (including the constantly-giggling weirdo Luciano Rossi) who've recently set up shop in Milan and may be connected to the murders themselves. And, of course, that strange guy in sunglasses always seems to be lurking around. Most of these people will be dead by the time everything is said and done.

Have you ever gone to a restaurant, ordered a sandwich and it comes on brioche or ciabatta and looks delicious based solely on the bread? But then you take a bite only to discover that the bread is actually the best thing about it? That's essentially this movie. It starts with an interesting set-up and has a lively, entertaining finale but nearly everything stuffed inside is flavorless, forgettable and mundane. The repressed-memory-recall-based-on-a-hallucinogenic-drug angle could have been taken all kinds of interesting places but, like a lot of the other filler crammed in here, turns out to be just a dead end. Though this is competently shot and has a few fun (and verrrry 70s) sets, there's not nearly enough directorial flair, visual imagination or plot interest to elevate it above the average.

The most interesting thing going on here is actually the lead character / main actress. This is the first time I've seen Navarro keep her clothes on for an entire film (in fact, this film has no nudity at all) and her "Valentina" is atypically assertive for a giallo female lead. She's also bitchy, sarcastic, hot-tempered and has a habit of slapping everyone in the face. While that doesn't make for a very likable heroine, and she's still forced to do a number of moronic things just so the plot can advance, it does stand out here as something a little different. 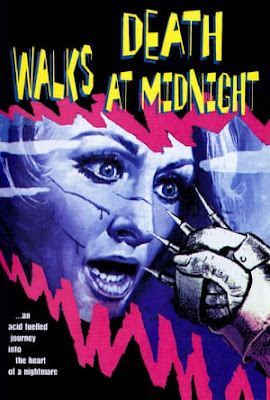 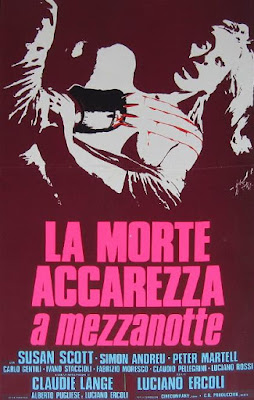 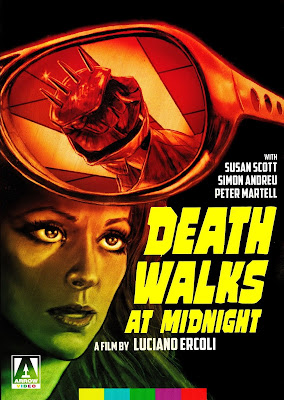 The typically convoluted script by Ernesto Gastaldi and May (Mahnahén) Velasco was based on a story by Sergio Corbucci. It was an Italian / Spanish co-production with parts filmed in both countries and is the third of five collaborations between the husband-and-wife team of Ercoli and Navarro following Forbidden Photos of a Lady Above Suspicion (1970) and (the much better) DEATH WALKS ON HIGH HEELS (1971). There was no U.S. release that I'm aware of until the 2006 No Shame DVD. It and the companion film High Heels have been issued on a Blu-ray box set titled "Death Walks Twice" by UK label Arrow Video.