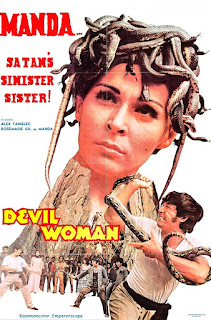 ... aka: 蛇妖精
... aka: Devil Woman
... aka: Evil Snake Girl
... aka: Kung Fu aux Philippines (Kung Fu in the Philippines)
... aka: Manda the Snake Girl
... aka: Manda vs. Kung Fu
... aka: Serpientes asesinas vs. Kung fu (Killer Snakes vs. Kung Fu)
Directed by:
Felix Villar
Albert (Chi-Lien) Chu
Before we can even really delve into this film, we first need to try to clear up some confusion about three different films currently caught up in a web of online misinformation fuckery. The first movie is a Filipino horror film called Devil Woman, which was released in 1970, directed by Jose Flores Sibal and stars Divina Valencia in the title role. IMDb and many other websites currently use an incorrect poster for this title. The real poster, and the ONLY poster, for this one can be found RIGHT HERE. To my knowledge, this has never been released on home video anywhere and is currently unavailable to view, so we're going to just sweep this under the rug and forget about it for the time being.
Our second Devil Woman film, the one this review will be covering, is a Hong Kong / Filipino co-production that was co-directed by Felix Villar and Albert (Chi-Lien) Yu and features a mixed Filipino and Chinese cast, with the former headed up by Rosemarie Gil in the title role and the latter by Alex Tang Lee as the doctor hero. This was supposedly first released in the Philippines in 1974, then released as She yao jing (蛇妖精) in Hong Kong that same year and received international distribution after that. Here in the U. S. it was English dubbed, re-titled Devil Woman and often shown on a double bill with the kung fu film Dragons Never Die (1974), which featured the same male lead. It was also released in France as Kung Fu aux Philippines ("Kung Fu in the Philippines") and in Spanish-speaking countries as Serpientes asesinas vs. Kung fu ("Killer Snakes vs. Kung Fu"). 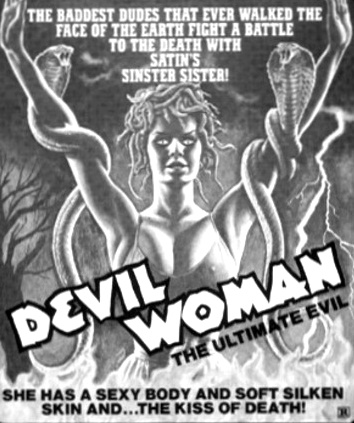 The third Devil Woman film isn't actually called Devil Woman nor was it ever released as Devil Woman but is instead an immediate sequel to (1973's) Devil Woman from the same production company, directors and writer. It also starred Gil (reprising her role) with a mostly new supporting cast. This was released in Hong Kong under the title She tou ren (蛇头人) in the summer of 1975 but may have been out in the Philippines a little earlier than that. It was also released theatrically in America as Bruka: Queen of Evil. Other English titles listed online include Manda the Snake Girl Part 2 and Devil Woman Part 2, though I couldn't find any evidence it was ever officially released under either title. While this was probably English dubbed for its initial theatrical release here in the States, the only home video release is in Chinese with English subtitles.

Primarily responsible for causing the confusion between these three films over the years is IMDb. Currently, they have the U. S. theatrical poster for 1973's Devil Woman used for the 1970 Devil Woman and combine 1973's Devil Woman and its sequel Bruka into a single entry (mushing up the casts, alternative titles and such), which make the two separate films look like just one. In addition, they currently have Devil Woman '73 listed a second time under its Mexican release title using the English translation Manda (Snakewoman) vs. Kung Fu. Not sure if anyone ever plans on correcting that or not but it's been like that for quite some time now and this misinformation has bled out onto many other film websites over the years. 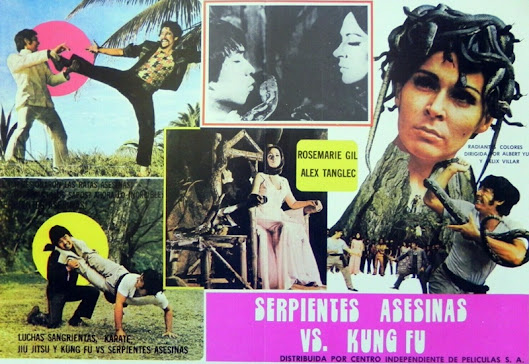 During a thunderstorm, a woman named Rita gives birth to a baby girl with a Medusa-like head full of poisonous snakes instead of hair. Arnold, the father, deems her a "monster" and threatens to kill her, but is talked out of it by his wife, who names the girl Manda. The birth is followed by the village being struck by a drought and poverty, as well as snake-related deaths all occurring late at night, which has locals thinking they've been cursed by the devil.
About ten years later, little Manda (Cherie Gil) is living a quiet life with her parents in the country. Her father has grown to love and accept her but insists she wear a hijab around her head at all times. Despite successfully hiding her snake hair, she's become an outcast in the village due to her parents being poor and is constantly bullied by other kids. Manda mostly just plays alone with snakes, which she's discovered she has the ability to control using her mind and a wave of the hand. One little boy does become her friend but he's unable to protect her when other kids corner her and try to take her head scarf off. One of the bullies is bitten by a snake and dies, which leads to a torch-carrying mob heading out to Manda's home late at night. Her father gets stabbed to death with a machete, but her mother manages to sneak her out of the window before she's killed in a fire when their home is set ablaze.

Another decade passes. Kung fu-fighting physician Dr. Shu Wen (Alex Tang Lee) comes to the village to help the wealthy Mr. Christman with his injured leg, but first has to use his martial arts skills to run off some local thugs who attempt to gang rape Christman's daughter, Tina ("Johanna" / Djhoanna Garcia). Those bandits, led by Lu Po (Yukio Someno), have been running amok in the village, beating people up, robbing everyone in sight (including looting a church) and doing other awful things.
The vengeful, now-adult Manda (Rosemarie Gil) is still lurking around and has started using her powers to make snakes kill those responsible for killing her parents. Using her slithery allies as threats, she manages to get Lu Po and his gang on her side and rewards them by letting them kidnap and drag village girls to their cave hideout to use as sex slaves. Manda's lone friend from her childhood (Lito Legaspi) shows up and confesses his love for her but she's forced to keep him at a distance and has no intention of stopping her rampage.

Sadly, this ended up being quite the disappointment, starting with the fact that the directors can't seem to decide what kind of film they actually want to make here. This often feels like two entirely different movies haphazardly spliced together, with the two warring plot lines constantly vying for our attention. That could have been tolerable except for the fact one of these plots is not the least bit interesting while the other is potentially of some interest yet gets smothered by the lamer one.
Despite featuring about half-a-dozen OK kung fu fights (choreographed and directed by Corey Yuen, Brandy Yuen and Bun Yuen; all of whom also appear as thugs in the film), the entire story featuring Dr. Shu is a slog. He gets romantically involved with Tina, which doesn't sit well with her cousin Waldo (Romy Diaz), who's also in love with her. Waldo has his own gang and constantly tries to kill the "Chinaman" interloper. They keep attacking him, he keeps kicking their asses and they keep running off, threatening to get him next time. Rinse and repeat. More time is wasted showing stuff like cockfights, dancing and amateur boxing at a birthday party.

The snake woman revenge stuff is slightly better / more entertaining. However, it's never given a chance to build up any steam since we keep moving away from it for long stretches of time. They do try to converge the stories at the very end but, despite a lively finale featuring loads of fighting, flying snakes and fireballs, it's too little, too late. The dreadful English dubbing, with extremely grating voice actors doing that "trying to match the lips" routine means there are frequent awkward pauses in most of the lines. As is customary for this time, lots of real snakes are also killed. There's some nice scenery throughout and a zillion shots from behind trees, plants and flowers to show off the natural beauty of the Philippines but, hey, there's always The Travel Channel for that.

Devil Woman was hard to come by throughout most of the video era here in America. The first VHS release I'm aware of was from Something Weird in 1996. It was then released on a double feature DVD by Code Red in 2016, paired with Jim Sharman's completely dissimilar The Night, the Prowler (1978). Cinema Epoch now distributes a decent widescreen print on many streaming platforms and it's quite easy to find.
★1/2
Posted by The Bloody Pit of Horror at 1:32 PM No comments: