In the 19th Century, Vargas Diaz (Danny Trejo, the bartender in all three FROM DUSK TILL DAWN movies) discovers the "tomb of the goddess of death" in a small Mexican village. He hires townspeople to help retrieve the treasure, promising to split the profits with them. Instead, he lures every citizen of the village into the mine where the valuables were located and blows it up. After doing in eight of his faithful men with poisoned win to ensure a 100% profit margin, he gets involved in a gunfight and accidentally shoots his own young son. Around a hundred years later (in 1952), Thomas White (Jeffrey Combs) and his family; wife (Ellie Cornell, from HALLOWEEN 4 and 5), 19-year-old blonde daughter and young son in arm braces (from polio), take a pit stop in the same small town on their way to the beach. They go to a hotel and notice the people there are acting incredibly strange (and no one has signed the guest book for almost a decade), but decide to stay anyway. Son Ricky ends up being possessed by an evil spirit. Daughter Lilly (who's nice enough to treat viewers to a topless bathtub scene first) is attacked by an elderly woman downstairs, only to stumble outside and be devoured by zombies (i.e. the resurrected people killed in the mine). And the parents, well we learn later that they were just hacked to pieces with a hatchet.

Fifty-three years later, newly-engaged college students Alicia (Marisa Ramirez) and Joss (Travis Webster) are traveling through Mexico in route to visiting her parents. They wreck their car in the same small town where all this bad s--t is taking place during (gasp!) Dia De Los Muertos (Day of the Dead to us Yanks), when all the dead are rumored to walk the Earth. Immediately, the duo discover a distraught young woman named Esmeralda who has had her tongue removed. Thankfully, a friendly American sheriff (David Keith) is in town and ready to take control of the situation. Unfortunately, he's also the same possessed little boy from 1952, all grown up and committing his own human sacrifice rituals. He kills Esmeralda for giving him too much trouble and then plots to sacrifice Alicia, because apparently only a beautiful young Mexican woman will work in the ceremonies.

Alicia and Joss check into a local hotel decorated with altars, crosses and skulls, where Former Miss USA Laura Harring (also in David Lynch's MULHOLLAND DR.) and some old psychic woman mope around, acts strange and offer up drugged wine and bread to sedate their guests. Joss, who is arrogant, obnoxious and pretty irritating all around, phones his black pre-med friend Tyler and Tyler's blonde "vacuous cheerleader" girlfriend Erica (Nichole Hiltz) to come down and pick them up. He and Alicia promptly screw (I guess finding mutilated people in the road really turns them on), more weird stuff happens, Tyler and Erica arrive, the four make small talk (lame "trendy" SCREAM-like dialogue with horror movie references; ugh) and then the zombies finally show up to try to eat everyone. You go zombies. Eat 'em all up. Please. In an all-too-familiar NIGHT OF THE LIVING DEAD situation, they board up the doors and windows while the mini zombie army try to get inside. Oh yeah, and wouldn't ya know it... Vargas is still alive and well at 150 years old and living in a secret room in the hotel (he is who the ghouls are really trying to get at). Alicia put it best when she solemnly intones, "This place is fucked up! These people are crazy!"

The whole thing is pretty mindless and fails to generate any atmosphere despite the setting and some good make-up fx. It also comes complete with one of the dumbest horror movie character actions in recent memory. Hell, it almost tops the girl-who-jumps-into-a-fiery-inferno-to-be-with-her-dead-boyfriend scene in CHILDREN OF THE CORN 5. After Tyler is attacked by a few dozen flesh-munching ghouls, Erica drives away to a safe distance and can clearly see her boyfriend is history. So instead of just driving off like any normal person would do, she puts the car in reverse, goes right back into the middle of the pack of zombies, opens the passenger side door and tries to yank his dead body back into the car with her!! Thankfully, she quickly gets her throat ripped out for being such a stupid bitch.

Well, in any case, All Souls Day is not a very good later-day showcase for horror icon Jeffrey Combs, who had appeared in the director's previous effort THE ATTIC EXPEDITIONS (2001). His performance is fine (and it's always nice to see him in anything), but he doesn't get to do or say anything noteworthy during his short time on screen. Hell, even his death is off-screen and he isn't even seen as a zombie. Newcomer Ramirez shows some potential (and has no problems with nudity). It debuted on the Sci-Fi Channel. 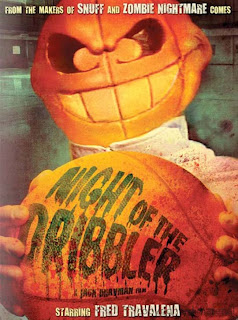 
At all North American border crossings, firm rules have been established about what Canadians cannot bring into the U.S. and vice versa. It's too bad "copy of Night of the Dribbler" never made the American list. Not since IMPS* has so many painfully unfunny jokes been crammed into just one film. Dribbler, an AIRPLANE-style kitchen sink "comedy" which includes a serial killer, is so unbelievably bad that it was allowed to rest peacefully in someone's garage for around two decades as not to humiliate anyone involved. Code Red eventually had to ruin everything by finally putting this thing out on DVD; marketing it as a recently-unearthed slasher flick. Director Jack Bravman has previously directed several other low budget genre films: JANIE (1970), about a murderous Lethal Lolita with severe daddy issues (which was made with help from NYC erotica pioneers Michael and Roberta Findlay), and ZOMBIE NIGHTMARE (1986), a voodoo / zombie revenge tale starring Canuck hair rocker Jon-Mikl Thor. The latter managed to pick up a small cult following (thanks primarily to being featured on an episode of Mystery Science Theatre 3000), but there's zero hope for Dribbler doing the same. It should have never seen the light of day. 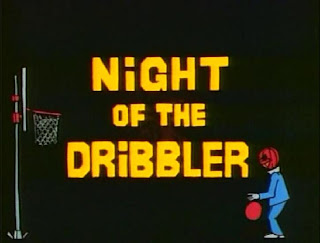 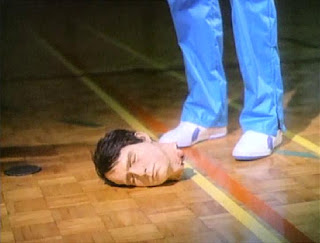 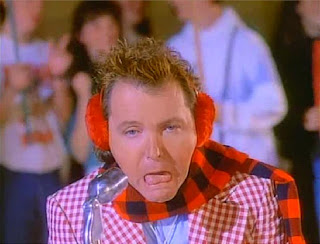 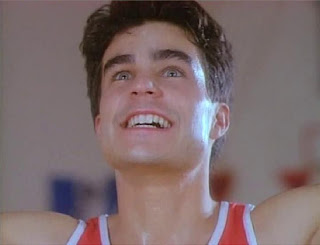 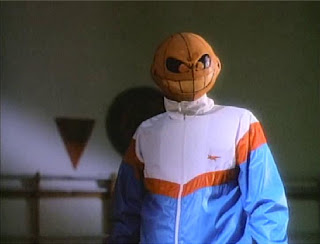 At Watergate High School, their basketball team "The Plumbers" are in the middle of a 6-year-losing streak thanks to untalented players and thoroughly incompetent leadership from Coach Cherry (Fred Travalena). A psycho wearing a smiling basketball mask and with a constant irritating giggle - begins trimming off all the players one team captain at a time. Things are centered around Stan Bates (Gregory Calpakis), a "lower on the evolutionary scale than a slug" benchwarmer who's stuck as the team's equipment manager and ball boy. Whoever's doing the killings seems to be trying to get Stan on the court. Stan's overbearing father (Bill Saddler), who pressured him to join the team in the first place, constantly smacks him in the head and even hits him with his car, is one suspect. And so is a supportive goth girl named Becky (Flavia Carrozzi), who appears to be stalking Stan and speaks in annoying Afterschool Special cliches ("Confidence is something that comes from inside you!"). Dean Marks (Cynthia Mantel) really wants her team to win or else she's going to have to ride the rival team's parade float nekkid and get an unflattering tattoo. There's a weird science teacher who's always at the wrong place at the wrong time and Stan himself could also be the culprit. So desperate to make the team, he listens to self help tapes and tries to hypnotise the basket but ends up hypnotizing himself instead. 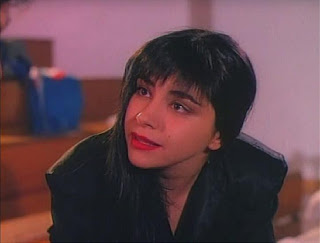 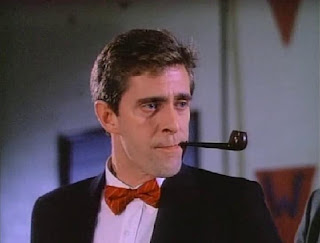 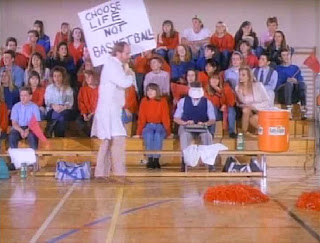 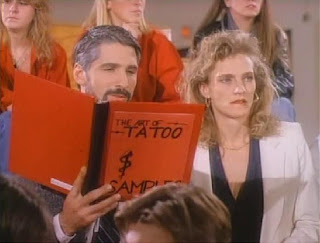 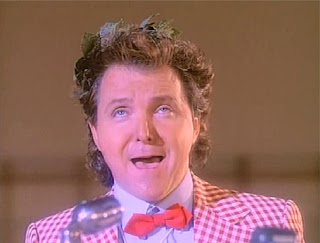 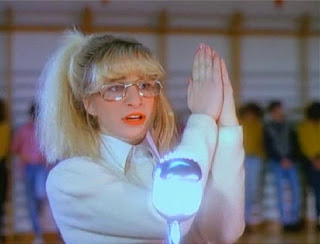 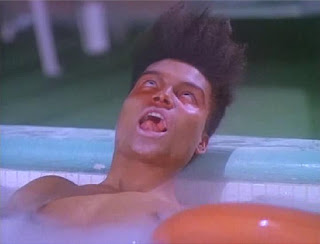 As I've already stated, the comedy aspects are completely and painfully unfunny. None of the jokes or "witty" lines really work. Maurice Thevenet's script has got to be one of the worst ever produced, combining consistently terrible dialogue, lousy and childish sight gags and a thoroughly predictable mystery. To make matters even more insufferable, there's also a sappy "message" thrown in that's sure to have you throwing up a little in your mouth. The acting is very amateurish and the film also looks incredibly cheap; the majority of it was filmed in a high school gymanseum. Cast as not only the coach but also an obnoxious announcer and an inept police detective, Travalena seems to have some talent as a comedian but he's completely unrestrained and damn near unbearable to watch here. He sings, screams, cackles, contorts his face, rolls his eyes, talks a mile a minute and never shuts up. He also does all kind of celebrity impersonations, including Bela Lugosi, Michael Jackson, Zelda Rubinstein and Jack Nicholson. I'll give him an A for effort when it comes to enthusiam, but making any of the atrocious dialogue he's handed amusing is an impossible task.


Coach
"Last time I saw faces like yours... was on the court fifteen seconds ago."

Player
"Coach, can I have a word with you."
Coach
"How about semi-conductor? 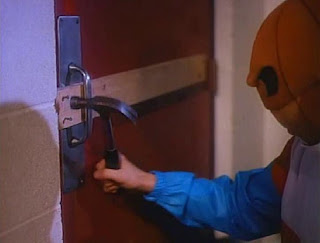 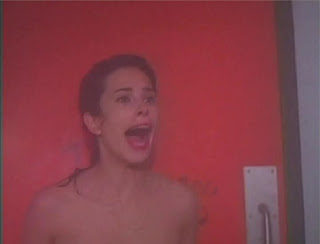 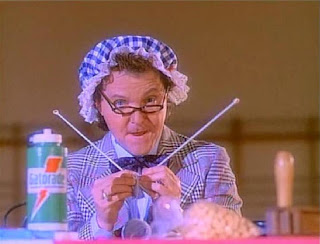 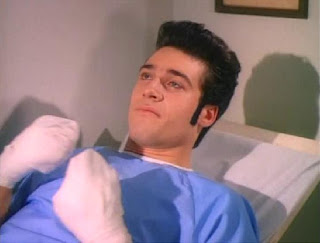 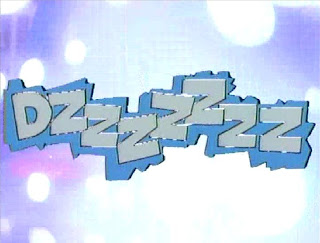 So the film fails on laughs big time. It also refuses to throw us a bone by at least being tasteless or trashy. There's no sex or nudity and next to no violence. There isn't even any foul language. You can see tape on one of the actresses breasts even when she's doing an above-the-shoulders shower scene and there's no gore unless you count a few rubber body parts being tossed around. One guy is decapitated (the killer throws the head through the hoop), there's an electrocution in the hot tub, someone gets scalded by hot water in the shower and another is blown up. The one and only clever moment is when the killer lines a hoop with a razor and it ends up cutting a guy's hands off when he tries to dunk a ball.