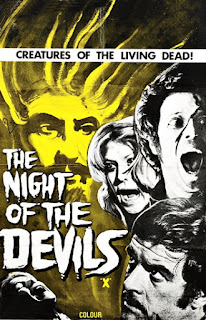 
Director Ferroni started out making documentaries and shorts and won numerous awards at the Venice Film Festival in the late 30s for his early work. After this promising start, he moved on to making features and the acclaim pretty much vanished. Regardless, Ferroni churned out over 40 movies in all different genres from the late 40s until the mid 70s, making westerns, war movies, sword-and-sandal / peplum films, romantic comedies and returning to documentaries for a short spell in the late 50s. What's a shame about all of this is that, going by all available evidence, the man had a real flair for making moody and highly-atmospheric horror films... yet only had a chance to make two of them. The first was the stylish Gothic horror Mill of the Stone Women (1960), which was the first Italian horror film to be shot in color and was widely unseen (and under-appreciated) by American audiences until a 2004 DVD release from Mondo Macabro remedied that. The film has since earned itself a small yet faithful following. Night of the Devils, his second and final horror film (and second to last film period), was also the recipient of a belated release here in America, but likewise shows great promise that we sadly never got to see fully realized. 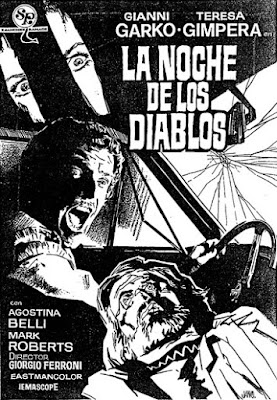 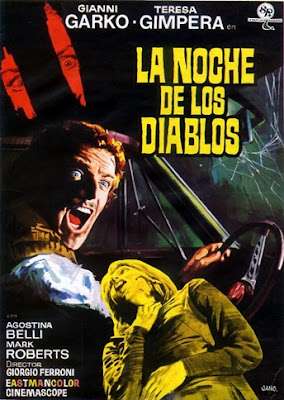 An Italian / Spanish co-production filmed entirely in Italy, Devils is based on the 1839 Aleksei Tolstoy novelette Sem'ya vurdalaka, which was most famously adapted by Mario Bava for his colorful three-part anthology Black Sabbath (1963), starring Boris Karloff. Other adaptations included "La familia Vourdalak" (1975, “The Vourdalak Family”), an episode of the Spanish TV series El quinto jinete / "The Fifth Horseman" in 1975, and several Russian versions, including Semya vurdalakov (1990; THE VAMPIRE FAMILY) and Papa, umer ded moroz (1991; Daddy, Father Frost Is Dead). As was typical for the time, alternate takes of certain scenes were shot for different markets. Some of these contained nudity while others showed the actress clad in something like a nightgown. Naturally, in the restrictive Francisco Franco era, the Spanish cut was missing all traces of nudity, yet most of the blood and violence remained intact. Kind of sad to know that today's “moralists,” who seem to think showing a female breast is more offense than hundreds of people being shot and blow to smithereens in some glorified war epic, haven't really evolved much over the years. 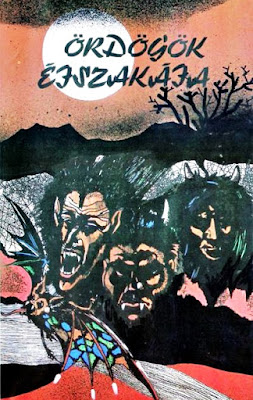 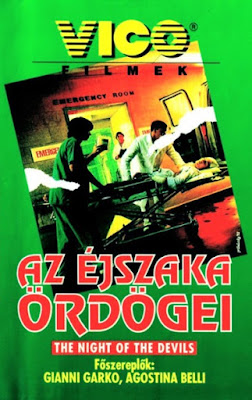 Clothes ripped and dirty, face bloody and bruised, Nicholas (Gianni Garko) wanders out of the woods and passes out near a stream. He's taken to an Italian hospital where Dr. Tosi (Umberto Raho) and his nurse (Rosita Torosh) runs some tests and Nicholas has horrifying visions of a naked women being pawed, a face exploding, claws ripping through flesh and a hand tearing out a beating human heart. Suffering from shock and amnesia, Nicholas doesn't remember what happened to him but he does know he has good reason to fear the dark and gets extremely agitated whenever the lights are shut off. At night, he stands guard at his window as if he's waiting for someone or some thing to show up... Someone eventually does show up; a pretty young woman named Sdenka (Agostina Belli) who arrives by cab late at night and claims she met him in Yugoslavia when he was there doing business. As soon as he lays eyes on Sdenka, Nicholas flips out, has to be put in a straight jacket and is given a sedative, but why is he reacting this way? As Nicholas falls asleep, the truth will reveal itself in the form of a dream / flashback...

Upon arriving in Yugoslavia, Nicholas makes the unwise choice of leaving the main highway and going down an old dirt road. To avoid hitting a woman who suddenly walks out of the brush, he wrecks his vehicle is forced to then walk through the woods until he finds someone who can help. He finally reaches an old house. At first, no one appears to be home, but that's because most of the family are off burying one of their own. When they arrive back at dusk from his brother's funeral, patriarch Gorca Ciulevak (Bill Vanders) offers Nicholas a place to stay because once the sun goes down, he claims, it's too dangerous to be outside. It's also too dangerous not to lock all your doors and board all of your windows up tight... and apparently too dangerous for anyone else to live there as all of the previous villagers have fled the area save for Gorca and his kin.

At dinner, Nicholas is introduced to the rest of the family, including newly-widowed daughter-in-law Helen (Teresa Gimpera), her two young daughters; Irina (Cinzia De Carolis) and Mira (Sabrina Tamborra), and Gorca's three grown children; the hot-tempered Jovan (“Mark Roberts” / Roberto Maldera), who's secretly been in love with Elena for years and more than ready to take over where his dead Uncle left off, Vlado (Luis Suárez) and, of course, the lovely and sweet Sdenka. Nicholas is given the Uncle's bedroom and instructed to never, under any circumstances, open the doors or windows at night. Just what are they trying to keep out? Well, whatever it is likes to come right up to the home after nightfall and knock on the door and likely has something to do with a creepy old woman (Maria Monti) lurking around in the woods. Nicholas finds himself stranded there while all of this is going on while he waits for Jovan (who spent some time in the military and knows a little about mechanics) to fix his car.

Rightfully believing his entire family has been cursed because a bargain his brother made with the old woman (a witch), Gorca sets out with a wooden stake to kill her. He makes an agreement with the rest of the family that if he's not finished with his task and back by 6 p.m. to not let him in the door. Just as the chime is ringing on the clock to announce his deadline, Gorca arrives back with a severed hand to prove the witch is indeed finally dead. However, he's not quite the same after supposedly killing the woman. He takes little Irina out into the forest one day and returns without her, leading his family to believe he's now one of the undead. From there on out, one family member after another meets a bloody end. Some even come back from the dead. The witch has unleashed the curse of the Wurdulak upon them and, once transformed, the lonely Wurdulak prefer having company, especially the company of those they loved when they were still human.

Having fallen in love with Sdenka, Nicholas feels compelled to help even after his car is fixed and he can leave all of this behind if he so chooses. He goes to the city to ask former brigadier Kobacic (uncredited Renato Turi), now a heavily-religious man, to help and gets to hear all about the “never ending chain of death” caused by the curse. However, the chain can be broken if one of the victims is killed before they have a chance to claim another. Nicholas rushes back to the farm, but will he be in time to save Sdenka and her remaining family members? Things return back to present day at the hospital where our hero and Sdenka have a final encounter, which ends up not working out too well for either of them!

Already being familiar with the story and having seen two of the other film versions, this didn't offer up too many surprises but it's so well-made and wonderfully gloomy I didn't care so much. Unlike many other Euro Gothic's from the 60s and 70s, this doesn't suffer any real lags in action since we're thrust into that almost immediately through the first bookmarking scene, which builds up enough intrigue early on to get us through the obligatory expository passages later. The cast is good (leading man Garko especially), the forest locations and old farm houses are ideal and the lighting, art direction, camerawork and score are all skillfully done and contribute much to the atmosphere. There's also some fine work here from makeup artist Carlo Rambaldi, including fingers getting cut off in a car door and an excellent “putrefying” scene where skin on a face melts away to reveal a skull underneath. My one major beef with this one is a ridiculous twist at the very end. I'll admit it took me by surprise, but that doesn't mean I had to like it! 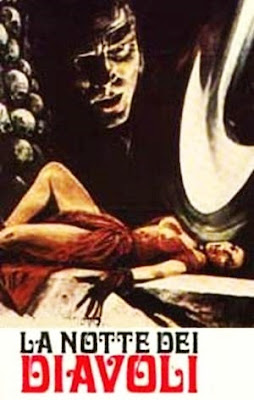 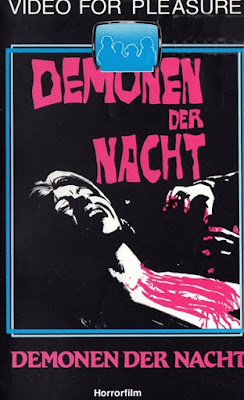 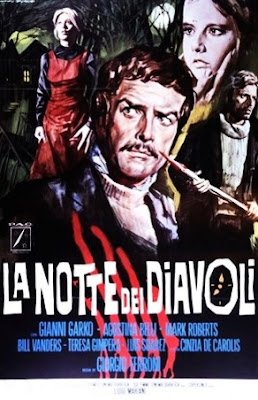 This was theatrically released in France, Italy, Spain and other countries and there were VHS releases in Hungary (twice; once from Hungaro Video and one from Vico Filmek), Japan (TDK Super Video), the Netherlands (Video for Pleasure), Sweden (Videce) and a number of Spanish-speaking countries but it was never officially released in America until Raro Video issued a DVD and Blu-ray in 2012. The Italian and English-dubbed Japanese VHS releases are both believed to be uncut and clock in at around 89 minutes; ditto for the restored Raro DVD release, which they claim runs 95. When this debuted on Spanish TV it was cut down to just 72 minutes. An 86-minute remastered Spanish DVD print (titled La noche de los diablos) splices in previously cut (though very brief) nude scenes from Belli and Gimpera but is missing some other scenes.