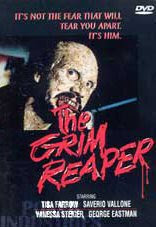 ...aka: Anthropophagous: The Beast
...aka: Grim Reaper, The
...aka: Man Beast
...aka: Savage Island, The
...aka: Zombie's Rage, The
Directed by:
Joe D'Amato
Like many of his contemporaries, Aristede Massaccesi/ Joe D'Amato was a highly uneven exploitation director. He made pretty good films in most popular genres (horror, action, sci-fi, XXX), as well as many bad ones. I feel this is one of his better ventures into the horror genre, along with the notorious BUIO OMEGA (BEYOND THE DARKNESS) and the surprisingly good 1981 sequel to this film - ROSSO SANGUE (aka MONSTER HUNTER). ZOMBI 2's Tisa Farrow (the less appealing and talented sister of Mia) stars here as Julie, a woman heading to a small Greek Island to help care for the blind teenager daughter of some friends. She meets a group of vacationers on a cable car (where the director appears in a very brief cameo) and they agree to take her to where she needs to go on their sailboat. Those on board include nice guy Andy (Saverio Vallone), tarot card obsessed Carol (CANNIBAL FEROX star Zora Kerova), her useless lover Daniel (Mark Bodin), pregnant Maggie (Serena Grandi, credited as "Vanessa Steiger") and Maggie's husband Arnold (Bob Larsen). When they arrive at the island to drop Julie off, a few decide to go look around while it's still daylight. By nightfall, several people have turned up missing and they discover not only that the town is empty but that they're stranded (the ship has drifted out to see). A few townspeople eventually surface; a mysterious woman who's lurking around (Rubina Rey) and the blind girl (Margaret Mazzantini, credited as "Margaret Donnelly"), who's found bloody and in a state of shock. Turns out there's a big, brutal, scary-looking, facially-deformed madman (George Eastman in convincing make-up) lurking around the island, killing and consuming victims.
One of the best things about this movie is the scenery and D'Amato makes good use of the desolate and picturesque locations. A huge, crumbling old mansion full of hidden rooms and a catacomb full of bones, skulls and decaying dead bodies being feasted on by red-eyed rats are just two of the great locations that add to the overall atmosphere. It's a pretty nice looking film, well photographed by Enrico Biribicchi, and the score from Marcello Giombini is excellent and creepy. There's also plenty of blood to satisfy the gore hounds, including a decapitation, a hatchet in the skull, a neck slashing, gut-munching and one notorious scene involving a fetus which may have single-handedly landed this on the coveted Video Nasty list. The DVD from Shriek Show/Media Blasters is the uncut version, which restores two previously cut scenes.
★★1/2
Posted by The Bloody Pit of Horror at 12:07 PM