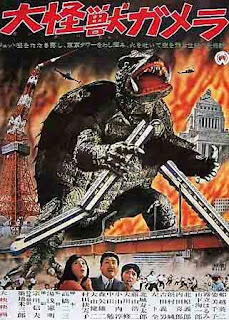 ...aka: Gamera
...aka: Gamera, the Giant Monster
...aka: Giant Monster Gamera, The
Directed by:
Noriaki Yuasa
Thanks to the international success of Toho's GODZILLA series and all of its offshoots (MOTHRA, RODAN, etc.), several rival companies decided to give chase in the giant monster sweepstakes. GAMERA, from Daiei Studios, is one of those, and probably the most popular of all the non-Toho Japanese monster flicks from the era, spawning six sequels in its original run as well as a new rebooted series beginning in 1995. GAMERA not only holds the distinction of being the only movie in its series to be filmed in black-and-white, it's also the last kaijû eiga to be filmed in black-and-white. The film is also noteworthy for being the only one in its series where the titular monster doesn't face off against another giant monster. So how's the actual movie? Somewhat fun, I guess. How can a giant upright-walking nuclear turtle not be a little fun?
The world's at war again (there's even mention of us being on the verge of WWIII) when a Russian airplane being pursued by some American fighter pilots decides to drop an A bomb out in the middle of the Arctic. The ice cracks open, steam rolls out and a gigantic prehistoric turtle (gah!) is awakened after a two-thousand year frozen slumber. It goes on to sink a ship, destroy a lighthouse, derail a train, demolish a geothermal plant and eventually turn Tokyo into a big pile of rubble. Amusing stuff? Yeah, pretty much, especially when a dance club full of bopping teens is smashed. The turtle ramage scenes deliver as is expected of them and the special effects are pretty fun. The rest of the movie is basically a snooze. Your typical group of scientists, militarymen, reporters, etc. try to bait the beast and discover it actually thrives on all manner of fire, nuclear energy, missles and bombs. There's also an orphaned boy who has a special connection to turtles of all sizes, thinks Gamera is just lonely and needs a friend and manages to get in the middle of everything. How our heroes rid the earth of the terrifying tortoise (for the time being, at least) is pretty amusing.
Sequels: GAMERA VS. BARUGON (1966; aka GAMERA STRIKES AGAIN), GAMERA VS. GAOS (1967; aka RETURN OF THE GIANT MONSTERS), GAMERA VS. VIRAS (1968; aka DESTROY ALL PLANETS), GAMERA VS. GUILLON (1969; aka ATTACK OF THE MONSTERS), GAMERA VS. MONSTER X (1970) and GAMERA VS. ZIGRA (1971). The series saw a resurgance years later with the release of GAMERA: THE GUARDIAN OF THE UNIVERSE (1995).
Eiji Funakoshi (BLIND BEAST), Yoshiro Kitahara (who also appeared - playing different roles - in the first three Gamera sequels) and Jun Hamamura (KWAIDAN, JIGOKU) star. In America, producer Sandy Frank scrapped some of the original footage and added brand new scenes featuring Albert Dekker, Brian Donlevy, Dick O'Neill and Alan Oppenheimer, among others. That version was released as GAMMERA THE INVINCIBLE in 1966 and is also available on DVD. I will likely review it separately on here eventually.
★★
Posted by The Bloody Pit of Horror at 10:56 AM No comments: 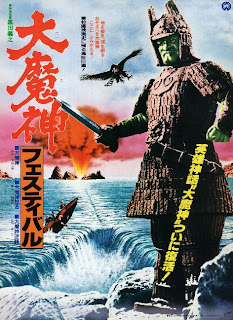 ...aka: Majin Strikes Again
...aka: Return of Daimajin, The
...aka: Return of Majin, The
...aka: Return of the Giant Majin, The
Directed by:
Kazuo Mori
After the surprisingly successful MAJIN, MONSTER OF TERROR came this immediate follow-up, which was filmed back-to-back with the two other Majin titles and is more or less just a rehash of the original. Unfortunately for this viewer, lightning didn't quite strike twice. There's a new set of characters here, but they're less interesting and less defined than the ones in the previous film. Furthermore, while the first featured several child characters, this one makes the mistake of centering the entire film around four of them, resulting in an overabundance of the cutesy that's not going to sit well with the glucose intolerant. The script doesn't really bring anything all that new or interesting to the table either. There are a couple of new additions to the Majin mythos, but the film still has the same basic premise as the first. The pacing is identical, right down to how (Dai)majin doesn't spring to life until the last 15-20 minutes of the film.
The film centers around two basic locations; a peaceful village and a mining camp. Right smack in the middle of the two is the steep mountain home of the giant (Dai)majin stone idol. Anyone who tries to side step the rocky terrain is kidnapped by an evil warlord and his army and forced to mine sulfur at a slave camp. If the prisoners cause any trouble or try to escape, they face death by being tossed into the boiling hot sulfur springs. Winter is quickly approaching and back at the village four concerned little boys want their missing fathers (now amongst the enslaved workers) back, so they decide to sneak off and brave the treacherous mountain all on their own. They scale cliffs, take a raft down rapids, try to avoid getting smashed by rockslides and avalanches and eventually are caught in a bad blizzard while trying to (sometimes comically) outwit the evil guards sent out to apprehend them. The kids also have an ally in a magical hawk who guides them along on their perilous quest. Naturally, when all seems lost, prayer brings Daimajin to life and he heads down to the mining camp to smash the place up, pummel the baddies and liberate the prisoners.
Though not nearly as enjoyable as the first, many of the same aesthetic pleasures have carried over to at least keep this juvenile fantasy-adventure watchable. Nearly every scene takes place outdoors and the mixture of well-designed sets and picturesque outdoor locations is fantastic. The special effects are also very good, as is the cinematography and music score. Then again, if you've seen the first already, you won't be seeing much new here. It was followed by THE WRATH OF DAIMAJIN, the third and final film in the series. Again, the top quality DVD release from AD Vision Films is recommended.
★★
Posted by The Bloody Pit of Horror at 7:53 AM No comments: