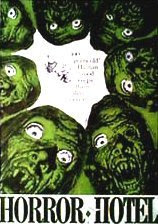 Directed by:
John Llewellyn Moxey
Originally titled THE CITY OF THE DEAD, this is one of the most atmospheric horror films produced in England in the 1960s, thanks in part to the incredibly handsome photography of Desmond Dickinson. It’s also the haziest, with a constant dense, impenetrable blanket of fog covering the ground in most of the outdoor scenes that creates a wonderfully nightmarish ambience. Doing research for a term paper for college professor/occult expert Alan Driscoll (Christopher Lee), plucky history student Nan Barlow (Venetia Stevenson) heads to Whitewood, Massachusetts, a secluded town New England town where 300 years earlier black magic, human sacrifice and witch-burning were common occurences. She rents a room at Raven’s Inn from the extremely uptight Mrs. Newless (Patricia Jessel) and gradually starts to realize the whole town is stuck in the 17th Century. The townspeople stop dead in their tracks to stare her down, dancers at a local tavern disappear, she hears strange noises coming from a downstairs cellar the proprietess claims doesn’t exist, a dead bird shows up in her room… and she never returns home.
Two weeks later, Nan’s brother Richard (Dennis Lotis) shows up to investigate and teams up with Patricia (Betta St. John), who has just moved to town to open a bookstore and seems to face a similar fate to that of Nan. It’s a great looking package, with top-notch art direction, sets and location work, intelligent dialogue, an interesting storyline with parallel plotlines and an excellent cast. Jessel is particularly impressive in her role, and Valentine Dyall puts in a brief, but very impactful, cameo. The re-mastered print viewed was letterboxed and in excellent condition. Even the copy contained in the cheap DVD packs is excellent.
★★★
Posted by The Bloody Pit of Horror at 10:40 AM