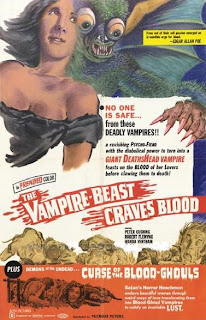 ...aka: Blood Beast from Hell


Somewhere in Merry Old England, pale corpses (all men for a change) are turning up drained of their blood. A vampire, you say? You would be wrong. Just as I was wrong in hoping this would somehow perk up my dreary movie viewing week. I should have known better. Apparently, star Peter Cushing had singled this particular film out in interviews as being the very worst of his entire career. While I haven't seen every film he's been in (far from it), as of now I'm apt to agree with him. The only other Cushing film I've seen in the same league of bad was LAND OF THE MINOTAUR (1975), but even that benefitted from picturesque Greek locations and Cushing himself was fine in a small supporting role. Here he's the lead and, for the first time ever, I got the impression he was working on autopilot. He not only looks utterly bored, but his line delivery lacks the usual conviction. Part of me is tempted to lay the blame on Sewell. I mean, he did get together a genre dream team (Karloff, Lee, Steele and Gough) for THE CRIMSON CULT (1968) the following year, and somehow managed to foul it all up, too. Supposedly, Robert Flemyng (who replaced Basil Rathbone in the 'mad scientist' role shortly before filming began), also had a miserable time working on this movie, so something clearly unpleasant was going on behind-the-scenes.
.
After a vague, poorly-filmed opening sequence supposedly set in Africa, a coach driver discovers a body and spots a strange, flying beast so spooky it drives him batshit crazy. We learn that the body is actually the sixth victim of a mysterious killer, but since the witness is unintelligible he's of no use to Inspector Quennell (Cushing). Other clues eventually lead Quennell to the home of professor and entomologist Dr. Karl Mallinger (Flemyng) and his seductress daughter Claire (Wanda Ventham). To make a long story short, Claire is the killer and every once in awhile she transforms into a giant bloodsucking deathshead moth (!) Yep, you heard that right. Giant bloodsucking deathshead moth.
.
The seldom-seen moth-monster costume consists of a mask with large, buggy red eyes, wings and a black bodysuit. To be fair, the mask itself isn't really that bad compared to many other 'B' horror pictures of the time. As silly as the concept is, I could live with it if they'd even bothered explaining its origins. If this is a man-made beast, how did the doctor make it? And why did he decide to do something like this to his own daughter? Is she even his daughter or another woman pretending to be his daughter? Why does she seem so unconcerned if she started out as a normal girl but has been transformed into a murderous beast? None of these questions are really answered. The fact Dr. Mallinger is busy at work trying to create a second moth creature as a mate for Claire leads one to believe that he somehow also turned her into what she is, but a little clarification, or motivation, would have been nice.
.
The amount of technical ineptitude on display, especially in comparison to other British horror titles from the era, is somewhat startling. The photography is murky, flat and even grainy at times, with night shots clearly filmed during the day using improper filtering. It's poorly paced and just as badly edited and directed. During one scene, the inspector's daughter Meg (played by Vanessa Howard) is talking to Claire and in the next scene she's hypnotized and strapped to a table getting her blood pumped out. So now the moth lady now has the ability to hypnotize her prey? Though the costumes and sets are decent in capturing the Victorian era, any potential for fun is squashed by how mannered, sedate and languidly paced the whole thing is. Sloppy attempts at time-lapsing transformations and poor acting, particularly from Flemyng (the male lead from the well-regarded 1962 Italian horror THE HORRIBLE DR. HICHCOCK) and Howard (impressive in the macabre black comedy GIRLY but certainly not here), don't help matters. Neither does a truly terrible 'moth to the flame' finale where a very brief, fuzzy close-up of a fiery flapping wing supposedly signals the demise of the creature. Some demise.
.
One thing that does actually fascinate me is wondering whether or not this film's writer (Peter Bryan) was influenced by the American Mothman legend. After all, the first reported sightings of Mothman in Pt. Pleasant, West Virginia (which - as per eyewitness descriptions - is nearly identical in appearance to the Mothwoman featured here) came in 1966, just a year before this film was made. Make you wonder, doesn't it?
.
Tigon, a short-lived rival to Hammer and Amicus, was the production company and it was originally released in America under the title The Vampire-Beast Craves Blood, where it was double billed with Curse of the Blood Ghouls aka SLAUGHTER OF THE VAMPIRES (1961).
.
★1/2
Posted by The Bloody Pit of Horror at 11:31 PM 2 comments: