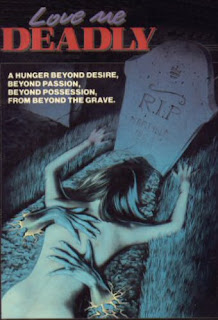 ...aka: Secrets of the Death Room

Directed by:
Jacques Lacerte
Lindsay Finch (Mary Wilcox), who was sexually molested by her father as a child, has grown into a rather disturbed young woman. She’s first seen at a funeral making out with a corpse, and next browsing through the obituaries for men who’ve died recently, looking for just one brief intimate moment once backs are turned or the room is empty. During one such trip she gets carried away and crushes the nose of a corpse, not realizing the face she was feeling was of a man whose face had to be reconstructed for the viewing. As she’s fleeing the mortuary, she bumps into the dead man’s brother Alex (Lyle Waggoner), briefly introduces herself and leaves. Meanwhile, Fred McSweeney (Timothy Scott), a mortician who runs his own funeral parlor, is out cruising the gay district of the city. He picks up a young street hustler named Billy-Jo (I. William Quinn) and gives him 10 extra bucks if he’ll accompany him to where he work for sex. When they get there, he talks Billy-Jo into getting up on a slab naked, then quickly straps him down, jabs needles into him and embalms him alive!

Lindsay, trying to force a “normal” relationship, goes on a date with a pushy, womanizing jerk named Wade (Christopher Stone) and begins spying on art gallery owner Alex because he resembles her dead father. Fred notices Lindsay’s been hanging around at funeal services and is getting touchy feely with the bodies and lets her know, “You are not alone.” Turns out Fred’s the leader of a secret society of hooded necrophiliacs who meet together and share their hobby late at night at his establishment. After going to pick up another prostitute (female this time), he sends Lindsay an invite. She goes, walks in on room full of nude necros getting down with a corpse and runs away in disgust. Fred promises to let her have a “private session”with a corpse to help ease her into this new and exciting (?) lifestyle.

Lindsay begins spending more and more time with Alex and the two eventually get married, but Alex is frustrated because his new bride sleeps in a different bedroom and won’t have sex with him. He becomes even more suspicious when she’s caught lying about sneaking off to the funeral home. The fact she's been receiving priority letters from McSweeney Funeral Home on a regular basis doesn't look good either. The bad news for him, and for anyone else who happens to stumble upon the secret society, is that they’re immediately killed.

There have been many other movies made before this one with a discreet hint of necrophilia, but this is one of the earliest I can think of that completely revolves around it and seems to be trying to maturely delve into psychological aspects instead of using the subject matter simply to shock. Lindsay is shown as a woman who desperately wants to be normal, but can’t. She’s far too overwhelmed by her urge to be with the dead to have a healthy relationship with a consenting adult. What most would deem sick and immoral is normal and comforting to her... and a select few others. Frequent flashbacks (some sepia toned) to Lindsay’s youth try to shed some light on why she is the way she is.
The performances here are very uneven; sometimes downright wooden. And to an extent, making the mortuary owner/necro cult leader a psychotic killer compromises the more serious-minded portrayal of the necro lifestyle as seen through the Lindsay character. However, the cast and crew both deserve some credit for taking on this subject matter and at least attempting to give an unthinkable lifestyle a human face. I'm sure this was considered pretty strong stuff back in 1972, though it might seem pretty tame to modern audiences. Kit Fuller sings the title theme song and it was produced by H.B. Halicki, who went on to direct the original version of GONE IN 60 SECONDS (1974). He also has a cameo here as a racecar driver.
.
Code Red and Media Blasters have both announced they were going to release the film as a special edition DVD, but Anime Works beat both to the punch with their 2008 release of the film. Something Weird also offers the film on DVD-R (which is sourced from a 35mm print) and it was also released to VHS back in the 80s by Video Gems.
★★1/2
Posted by The Bloody Pit of Horror at 6:21 AM No comments: 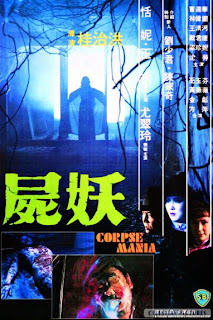