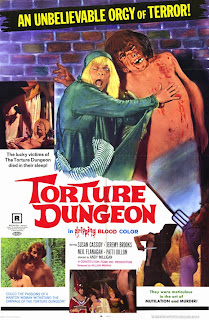 Life is full of regrets. Such as when I was a 9-year-old and got busted by a store manager sticking a G.I. Joe down the front of my pants, or when I was 16 and put a quart of oil in my power steering reserve. Now I can add "sitting on a stockpile of Andy Milligan movies for years and just now getting around to watching some of them" to my ever-growing list of boo boos. As soon as I heard the majestic classical music playing and saw a hideous yellow title card reading "Torture Dungeon" clumsily wedged in between the over-a-shawl-of-blue-silk credits, I pretty much knew I was gonna like this one. Only in Milligan's wacky universe could a film open with the camera nearly falling out of the director's hands (!) and then continue on with a scene of three flamboyant fellas walking through a field picking flowers before one of them is decapitated by a hooded executioner! On the outset, this might seem like a cut-rate TOWER OF LONDON wannabe, but if you have a taste for the weird and perverse, production values and competence be damned, then you'll find an extraordinary amount of off-the-wall goodies to be found here. 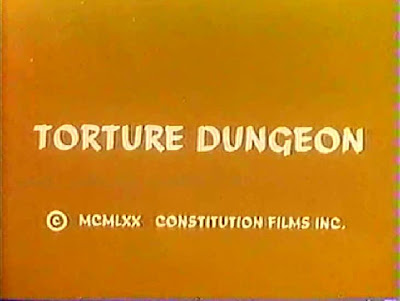 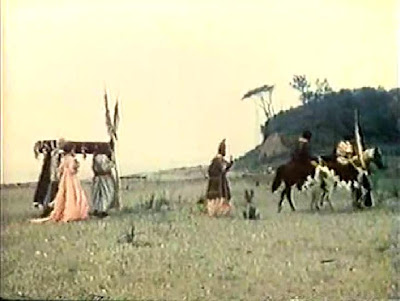 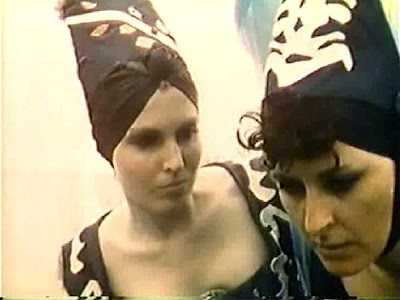 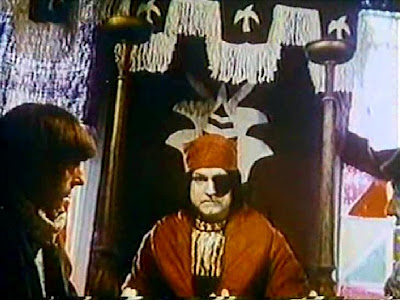 Mr. Milligan, a man who never understood the meaning of 'working within your means,' whisks us away to the magical, mythical Kingdom of Terragon, a land where period detail is lacking but kinky hijinks and fucked-up folks with major hang-ups are in abundance. The man who lost his head in the opening sequence just so happened to be of royal lineage. In fact, he was next in line to be crowned King. However, one of his dysfunctional family members wants complete control of the fledgling kingdom and will stop at nothing - including butchering anyone who gets in his way - to get it. While the plot might not sound like much, it's the warped screenplay, decadent characters and hilariously cheapjack production values that make this one so extra special. You will never, ever meet a group of characters like the ones featured in this flick. So without further ado, let me introduce you to some of them... 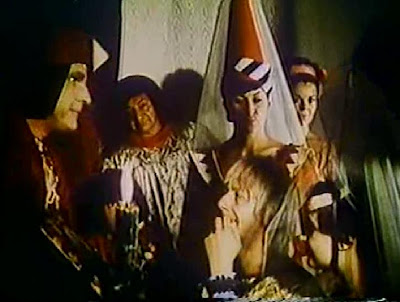 Norman, Duke of Norwich
(Gerald Jacuzzo as "Jeremy Brooks")
A swishy, perverted, eye-rolling, lip-smacking, self-proclaimed "tri-sexual," pleasure-seeking Frank Zappa look-a-like who makes Caligula look restrained by comparison and has temper tantrums more suited to a toddler, Norman is fourth in line for the crown... and he doesn't like it one bit. Conspiring with his hunchback sidekick, his mistress and a loin-cloth clad (!) executioner, Norman makes mince-meat out of those who are getting in the way of him living the lavish lifestyle he knows he deserves. He's so good he even has stuffy councilman Peter the Eye (Neil Flanagan) in his pocket. For laughs, Norman also operates his own private torture chamber where victims are chained up, starved and have their tongues and limbs removed. Despite the title of this film, his "Torture Dungeon" is only featured in one scene. Did I mention Norman also has temper tantrums?


Albert, Duke of Abernathy
(Hal Borske in a pageboy wig)
After the death of his brother, Albert has moved up to first in line for the crown and inescapably becomes a target of his unhinged half-brother. Not that it really matters since Albert is mentally retarded. You see, he "fell on his head" as a child, and now he can barely talk and likes to sit on the ground eating bugs and grass. He's so lame that he doesn't even know what to do during his wedding night and must be coached into taking off his clothes and joining his new bride in bed by Norman (who plots to steal his wife once the royal seed has been planted).


Heather MacGregor
(Susan Cassidy)
A busty nineteen-year-old peasant girl whose carefree days of frolicking nude in a stream and in the forest with her lover William (Dan Lyra) are about to come to an end. Heather is plucked from obscurity and offered up as Albert's bride after her adoptive father sells her for 30 gold pieces. She plans to run off with her beau, but the executioner shows up to crucify him and sink a pitchfork into his neck. But life must go on after all and Heather forgoes the grieving process in favor of getting knocked up by that drooling buffoon Albert.

Lady Jane
(Patricia Dillon)
Now second in line for the crown, tortured Lady Jane managed to get herself knocked up out of wedlock. To make matters worse, the father of her unborn child is dead. And to make matters even worse than that, the father of her unborn child is also her dead brother. She'd fallen in love with him and, knowing Norman is responsible for his death, plots revenge ("From now on, revenge is my lover!")

Lady Agatha
(Donna Whitfield)
Third in line for the crown, Lady Agatha is just kind of there... with only her amazingly wooden line deliveries to keep her company.

Magda
(Helen Adams)
An elderly, senile, shrill 'marriage counselor'... who for some strange reason finds it necessary to dress like a giant butterfly while dishing out the redundant goods on the birds and the bees to the less-than-wholesome Heather.

Rosemary
(Patricia Garvey)
Norman's other lover, Rosemary was a poor orphan who had religion shoved down her throat growing up. Her aunt sold her to the kingdom at age 12 and she spent the next four years eating table scraps and veggie peels. That is, until she became a chambermaid and found her way into Norman's bed. Now Norman wants to have a menage-a-troix with her and his hunchback buddy. Will Rosemary cave under the pressure?

Margaret, the One-Eyed Hag
(Maggie Rogers)
This 'one-eyed hag' has a bone to pick with Norman because years earlier he locked her in a burning church, which resulted in her being hideously disfigured, losing both her husband and one of her peepers and having to give up custody of her infant daughter. Did I mention that Heather has never met her mother? Yes, I believe I did. When not loitering around in the torture chamber or impressing with her spear-chucking skills, Margaret also takes time out of her busy schedule to provide us with the moral of the story: "Why do people do such fouls things? They're beasts by nature!" Preach it, sister. 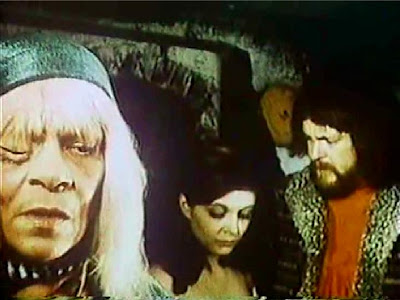 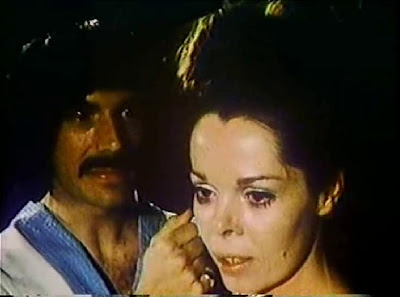 Needless to say, watching all of these not-so-fine folks interacting, fighting and killing each other off makes for some, uh, rather interesting viewing. I won't lead anyone astray by saying this is a good movie. It's not. The performances range from hilariously overwrought to ridiculously wooden, the sets would be subpar for an elementary school production, the costumes were all fashioned out of bedsheets, shower curtains and quilts and all of the music was stolen from other movies. The chaotic editing, lighting that is alternately too bright or too dark and amateurish 16mm photography are awful, too. While I recognize this for the disasterous mess it is, I can't help but recommend it as the fascinating and oddly engrossing train wreck that it is. Every horror fan should watch at least one Andy Milligan movie, and this is one of the 'best' I've seen so far. 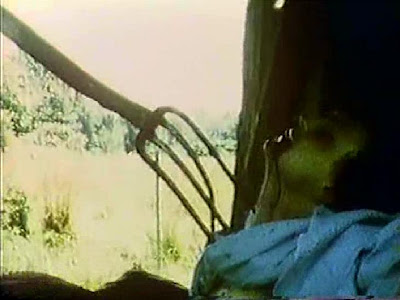 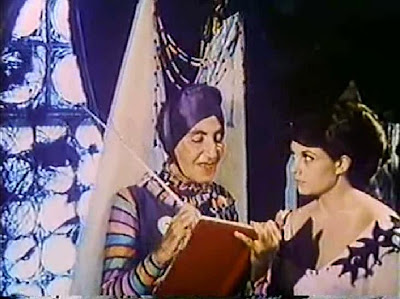 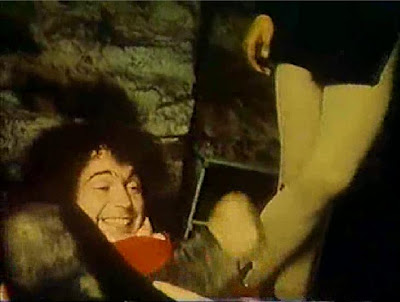 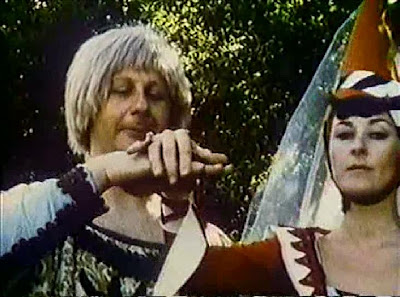 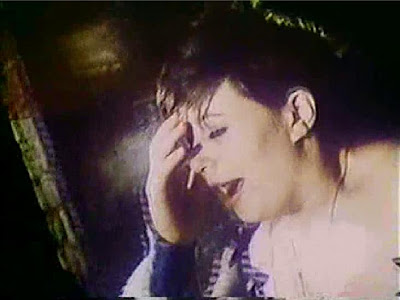 Strangely enough, in a film filled with incest, rape, child abuse, threesomes, full frontal nudity from both sexes and lots of cheap gore, a gay kissing scene between Norman and his hunchbacked amore was the one to be censored out (notice the jump in frames when the mad duke leans over hunchie and asks if he's happy). If left intact, that probably would have been a first in the world of horror. It was written by "John Borske" (who is probably co-star / technical director Hal Borske) and Milligan (who also shot it, did costumes as "Raffine" and probably also decorations as "Elaine"). The budget was just 15 thousand dollars. 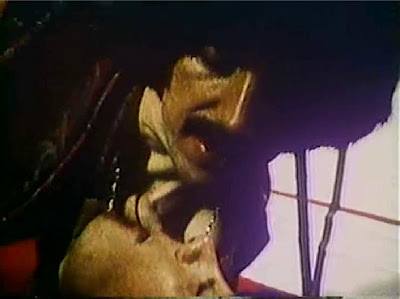 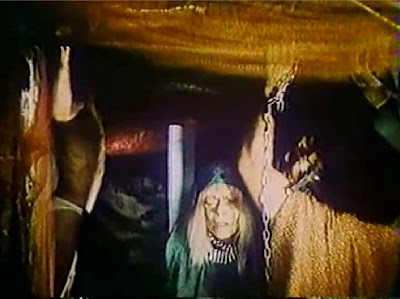 Midnight Video and Something Weird Video were the American video distributors. I don't believe this is officially on DVD. Methinks a Milligan box set is long overdue. I'll be the first in line.