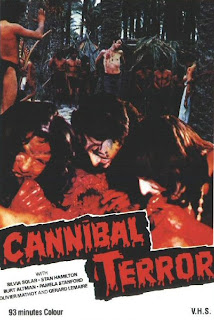 ...aka: Cannibal Terror
...aka: Terror canibal

For a long time this was mistakenly listed online and in various books as either an alternate title for Jesus Franco's MONDO CANNIBALE (aka WHITE CANNIBAL QUEEN), or an entirely different Franco film altogether. It was also mistaken for Franco's SEXO CANIBAL (aka DEVIL HUNTER), because it basically shares an almost identical kidnappers-stranded-in-cannibal-country premise. However, despite being made by the same cheapjack production company (Eurociné) around the same time and containing some of the same actors, this isn't a Franco film. I'm not sure he even had anything to do with at all despite still being listed in the credits over on IMDb. And speaking of credits (as if they aren't confusing enough already), the ones in the version I saw list Ilona Kunesova (the script supervisor for MONDO CANNIBALE) as the screenwriter and "Allan W. Steeve" as the director. Supposedly Mr. Steeve is an alias for Alain Deruelle, yet IMDb also lists the films co-star, Olivier Mathot, as well as Spanish actor Julio Pérez Tabernero, as additional uncredited directors. So who the hell actually did make this thing? I can't really answer that, but after watching this, I also can't blame everyone for wanting to hide behind whatever pseudonym they could come up with.

A trio of "gangsters," Roberto, Lina and Mario (the latter played by Franco movie regular Antonio Mayans) decide to kidnap little Florence (Annabelle) and keep her hostage until her wealthy parents (Silvia Solar and Olivier Mathot) can come up with the ransom money. To ensure an easy escape, the trio decide to drag the little girl across the border into "Indian territory" to hide out with some guy named Antonio and his much-younger wife Manuela (Pamela Stanford). On the way there, their jeep overheats and the female guide is kidnapped by a cannibal tribe, dragged off to their village and is then sliced open and eaten. The kidnappers manage to get the jeep running again and make it to Antonio's home. After Antonio leaves, Mario ties Manuela to a tree and rapes her. When Antonio returns, he ties Mario to a tree and whistles so that a couple of nearby cannibals can come eat him (?!) Everyone else flees into the "jungle" when the parents finally show up looking for their little girl and are picked off one by one by in unexciting ways by the tribe. The end.

I don't even know where to start describing how awful this thing is. I can only say that it's consistent in that everything (the acting, the ridiculous dubbed dialogue, the inappropriate score, badly edited in stock footage, etc.) is awful. It also commits the cardinal trash movie sin of being extremely boring. Aside from just two moments of gore (which are recycled from the aforementioned WHITE CANNIBAL QUEEN) and one scene of nudity (provided by Stanford during a hilarious bathing scene where she rapidly tries to scrub her body because she's obviously freezing her ass off outside in the "jungle") this movie is lacking in anything cannibal movie, horror or exploitation fans want to see. The entire grueling first hour consists mostly of people sitting around complaining, while the last half hour consists mostly of people walking around in the "jungle."

Notice I keep putting quotes around "jungle." That's because the "jungle" consists of pine trees, a couple of strategically-placed ferns, gravel roads and a snow-covered mountain backdrop to capture that authentic tropical feel. Even more ridiculous is the "cannibal tribe," which seems to consist of all ethnicities that they try to hide by painting everyone with multi-colored clown makeup. There are Asians, Caucasians, skinny guys, fat guys, little boys and hippies with porkchop sideburns, yet oddly just one female tribe member to populate the entire village. Even if you're a cannibal movie completist, I would think twice about picking this one up.