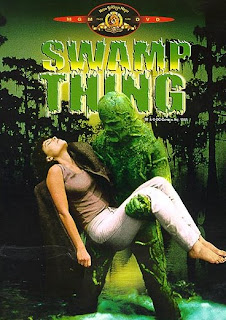 Directed by:
Wes Craven
Director Craven had previously made the controversial horror hits THE LAST HOUSE ON THE LEFT (1972) and THE HILLS HAVE EYES (1977), so audiences were probably surprised to see this good-natured, old-fashioned monster movie. Ray Wise stars as brilliant research scientist Alec Holland. He's attacked by a group of henchmen, set on fire and splashed with an experimental serum. After leaping into the swamp, the formula kicks into action and turns the good doctor into a half man/half vegetable monster (played by Dick Durock). Unlike in other horror movies, Holland still keeps his pleasant persona (he's a decent guy) and loves his former girlfriend Adrienne Barbeau (who goes topless here) from afar, but still wants revenge on the evil Dr. Arcane (a wonderfully slimy and campy Louis Jourdan) and his group of cretenous thugs (including Nicholas Worth and LAST HOUSE star David Hess). Other characters are also transformed into creatures after ingesting the same serum and face off against Swampie.
Craven pays due homage to monster classics of the past (particularly FRANKENSTEIN) and keeps this entertaining and charming for the most part. It's based on the great series of environmentally friendly 70s DC Comics and was followed by a worthless sequel (RETURN OF SWAMP THING) in 1989, as well as a syndicated TV series. Both starred Durock.
★★1/2
Posted by The Bloody Pit of Horror at 2:01 AM