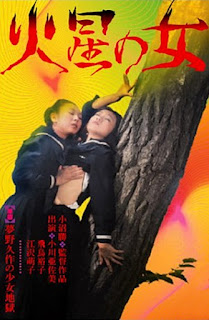 ... aka: 夢野久作の少女地獄
... aka: 火星の女
... aka: Girl Hell
... aka: Kasei no on'na
... aka: Raging Hell Fires
... aka: Teenage Girl Hell
... aka: Woman from Mars, The
... aka: Yumeno Kyusaku's Girl Hell
Directed by:
Masaru Konuma
Aiko Tonomiya (Yûko Asuka) is the teenage daughter of a respected school inspector / former general named Tadazumi (Eimei Esumi) and from a background of wealth and privilege. She's polite, skilled at playing piano and excels at her all girl's private school; held up as a perfect example of what a proper young lady and model student should be like by the staff and one that other students should look up to and try to emulate. However, it's all really just a façade. Aiko's home life is anything but happy. Her mother, Tomiko (Makiko Kishimoto), is miserable, sickly, bedridden and suicidal. Her sadistic father has absolutely no regard for his ailing wife's feelings, torments and abuses her and often brings geishas over to have loud drunken sex with right in the home; promising the uneasy sex workers that the sounds of his daughter's piano playing will cover up the noise. Part of the tensions are due to the fact Aiko's father may not actually be her father. In fact, he's certain that's the case. However, Aiko's mother refuses to divulge the true identity of the man.
Utae Amakawa (Asami Ogawa) is about the polar opposite of Aiko. She's unpopular, viewed as a weirdo and has been nicknamed "Mrs. Mars" by the others because she doesn't quite fit in. Utae comes from more humble means and her parents worry that no man will ever want to marry such a strange girl. Utae is frequently punished for disobeying the ridiculous school rules (like no eating on school grounds) and is disrespected by staff and student alike. None of that is surprising considering Utae has zero interest in playing their game. This school prides itself entirely on cranking out dutiful, obedient housewives and their success rate seems to be entirely measured by how quickly graduates can snag a successful, upper class husband and start popping out kids. Utae's quirkiness and athletic abilities serve her no purpose in this kind of world. In fact, her two best qualities are viewed as a debit.

Even though Aiko and Utae come from two different worlds, they're still drawn together by the mere fact neither has any kind of meaningful or authentic human connection, even within their own families. Aiko starts defending Utae from the staff and other students and then befriends her. The two start becoming closer, while simultaneously alienating everyone else around them. They experiment with intimacy with a large white balloon, get caught and are chastised for it, but none of that stops them from continuing to hang out and grow closer. That closeness starts manifesting itself in a more romantic way, starting with gentle touching and then becoming progressively more sexual. However, their budding relationship is obviously something forbidden, and Utae starts to fight against it.
The school principal ("Shôichi" / Masakazu Kuwayama) is a pervert who takes advantage of his position to prey on weaker students, all while hiding behind the "respectability" of his Christian faith. (Gee, some things just never change, do they?) A lifelong bachelor, the fifty-something principal claims he's never married because it would be a distraction from his work and dedication to his girls when in fact he's too busy trying to bed as many nubile young ladies as he can get his hands on. Like many sex predators, he has a knack for zeroing in on unhappy, troubled girls who feel outcast, lonely and lost. Realizing Utae is one of those girls, the principal makes his move on her. Though she initially resists, she finally submits to his advances and the two have sex.

Utae and the principal are caught by stuffy English teacher Miss Torako (Moeko Ezawa), who reveals to Utae that he's used the same grooming technique on countless other girls at the school over the years, as well as having his way with the mothers of failing students; agreeing to pass them in exchange for sex. However, Miss Torako is less interested in trying to protect Utae's feelings than she is having the principal to herself. She's in love with him, and has been for some time, though he doesn't reciprocate. Still, Utae believes she's found her kindred spirit in the principal and, when she finds out she's pregnant, plans on having their child. The principal then lures her to an abortionist under false pretenses. Though Utae manages to escape, she self-aborts by banging her abdomen against a piano until blood is running down her leg. Meanwhile, Aiko uses sex to get vital information from several staff members.
Soon after graduation, a small building on the campus burns to the ground and a charred corpse, burned beyond recognition, is found inside. A letter arrives addressed to the principal. It's a suicide note from Utae, who informs them that since she died a horrible death she will now be returning as a ghost to seek her revenge. Utae was also kind enough to send a letter to the police informing them the principal, the secretary (Noboru Mitani) and Miss Torako have all been embezzling funds from the school, as well as revealing that the devout churchgoing principal has been frequently seeking the company of geisha.
The cycle of destruction continues as creepy supernatural events start occurring. After the principal is slipped a piece of "charcoal" (burnt brain), he's chased by a driver-less trolley car that attempts to run him over. He's then sent a surprise package containing a dead rat with the inscription "Utae Amakawa's Fetus." Utae's ghost finally reveals herself; appearing before the principal and his two co-conspirators upside down in front of the window and laughing maniacally. That's followed by several mysterious deaths. The ghost causes a car crash by crawling up the hood of a car and either hangs someone or scares them into hanging themselves (after decapitating and de-tailing their beloved pet cat!) The utterly perplexing finale takes place either at a large rock quarry that may be Hell, or may be Mars, or may just be a regular ole rock quarry!

The aptly titled Girl Hell creates an ugly, ugly microcosm of the world where no one can be trusted, abuse is rampant, love is a ruse and our mere existence is both pointlessly cruel and cruelly pointless. All of the adults here are horrible people inflicting irreparable damage on the young due to their own self-interest, arrogance and desires, and the film is especially focused on putting adults in positions of power and influence under the microscope. Even a fire-and-brimstone street preacher (Nobutaka Masutomi) who spends his days lecturing passersby about the dangers of sinning and hell is later seen paying to have sex with one of the young girls. No doubt he'll be right back on that street corner the following day condemning others for their choices, just like the principal of the school and the general father will be right back to their respectable places within society the morning after abusing others behind closed doors.

Though this Nikkatsu production is technically in the pink / soft-core category, it also cuts it as an actual movie. Sure, there's a lot of nudity and sex involved (including from pink film regulars Tamaki Katsura and Rei Okamoto), but it also effectively and compellingly tells an interesting, intelligent story; providing characterization, plot twists and lots of subtext and food for thought along the way. However, its descent into outright surrealism and the nonsensical during the last half hour certainly isn't going to be for all tastes. From a technical standpoint, production values and cinematography (by Yonezô Maeda) are all very solid, though that's typically the case with Nikkatsu. The very bizarre score, which has synth and rock elements, is credited to Cosmos Factory.
As far as I can tell, this is the very first attempt to adapt the work of Japanese author Kyusaku Yumeno; an early 20th Century mystery, sci-fi and horror writer who's sometimes compared to H. P. Lovecraft. Yumeno is best known for his 1935 novel Dogra Magra, which is considered influential in regards to shaping later Japanese sci-fi films and manga and was also adapted for the screen in 1988. This one, adapted by Akio Ido, was based on a short story contained in his three-part anthology Shōjo jigoku ("The Hell of Girls") called Kasei no on'na / "The Woman from Mars"; also one of the titles used for the Japanese DVD release of the film. 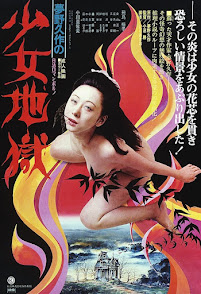 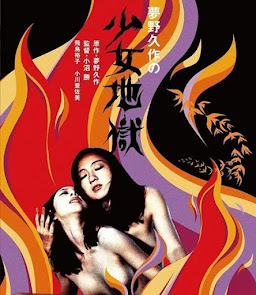 However, it must also be pointed out that this bears many striking similarities to the 1954 Parker-Hulme murder case in New Zealand, which was also the basis for the French exploitation film DON'T DELIVER US FROM EVIL (1971) and Peter Jackson's critically-acclaimed art house hit Heavenly Creatures (1994); the film that got critics to finally start taking him seriously after he made a string of gory horror films. It's probably no coincidence that this and Don't Deliver... both contain a very similar self-immolation climax, just as it's probably no coincidence that Jackson's film shares an uncommon amount of similarities with this one. Aside from almost identical characters in an almost identical predicament, Creatures also shares many key pieces of imagery with this one. Of course, this could all just be an amazing coincidence, but I'm not so sure.
★★★
Posted by The Bloody Pit of Horror at 3:27 PM No comments: