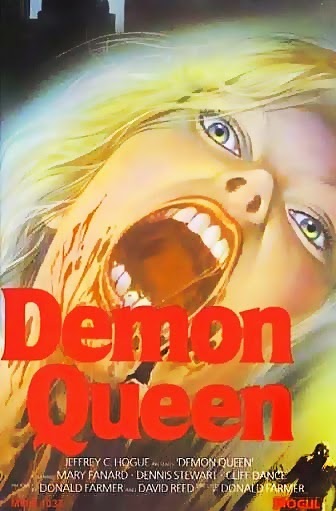 
During the video boom era of the 80s, distributors were so desperate for new product to add to their catalogues they'd release just about anything they could get their hands on. Foreign films and made-for-TV movies were popular acquisitions, but thanks to access to affordable consumer grade camcorders, a whole new generation of "filmmakers" came into the picture with various no-budget releases. Johnn Wintergate's awful-but-hilarious BOARDINGHOUSE (1982) was the first notable camcorder effort to turn up on home video (on the short-lived Betamax format under the title Housegeist), though it apparently was also shown in theaters first! There was also SLEDGE HAMMER (1984), a slasher from David A. Prior, followed by Christopher Lewis' Blood Cult (1985), which proudly claimed to be the very first movie made specifically for the home video market. Just one year later, director Donald Farmer fired up his own trusty camcorder and gave us his first of many attempts at horror - Demon Queen (1986), which was shot in both the Miami, Florida and Nashville, Tennessee areas and involves a seductive vampire-demon-succubus. I won't lie, this film is truly terrible in every sense of the word. Sloppy continuity errors, sound that frequently cuts out, opening and closing credits with misspelled words, actors grinning when they shouldn't and badly flubbed lines of dialogue are all allowed to pass into the finished product. It's also very badly padded out. If you cut out the opening and closing credits, the film runs just 46 minutes! There's also a pointless dream sequence of the the demon queen ripping out some guy's heart. That whole sequence lasts a gruelingly long 8 minutes.

The story centers around Jesse (Dennis Stewart), a lowly drug pusher in an unhappy relationship with bitchy, strung-out girlfriend Wendy (Patti Valliere). Jesse owes dwarf coke dealer Izzie (Ric Foster) six-thousand bucks and when Izzie has his henchman Bone (Cliff Dance) come to collect, a sexy and mysterious female in shades shows up to save the day. Jesse, who was temporarily knocked out, awakens to find Bone dead on the ground, his throat ripped out, and the woman who did it - Lucinda (Mary Fanaro) - in need of a place to stay. Jesse figures he owes Lucinda at least one favor since she saved his life and lets her come crash at his pad. Naturally, Lucinda turns out to be some kind of evil demon-succubus-vampire monster who likes to seduce men, rip out their hearts and then rub them on her bare breasts. Some of those killed by Lucinda return as flesh-eating zombies. To pad out the thin storyline, we get a succession of victims in random scenes getting stalked and killed. To pad out the thin story line even more, there are several scenes that take place at a video store, where the horror-loving owner talks to a couple renting Make Them Die Slowly, and deals with a bitchy customer who only wants to rent Barbra Streisand movies.

Fanaro, who has some screen presence, is one aspect of the film they did manage to get right. She's tall, thin, has an alluringly husky voice and a short, spiky hairstyle that reminded me of La Femme Nikita star Anne Parillaud (who got to play a sexy vampire herself in 1992's Innocent Blood). Fanaro went on to some other roles in higher-profile movies and television shows, and also got to star in Tim Ritter's TRUTH OR DARE... A CRITICAL MADNESS around the same time. The less said about the rest of the cast the better.

There are topless scenes from the leading lady and another actress (who is killed in the bathtub), as well as a couple of OK ripped-throats-gushing-blood effects. The succubus in her demon form is only seen in a few brief flashes but looks like a torched Muppet. One hilariously botched effect occurs when the main actor is struggling with one of the zombies at the very end. Obviously he was supposed to reach up and tear off the zombie's skin to reveal a skull face underneath. Unfortunately, the layer of skin he grabs doesn't come all the way off on the first try, so he casually has to reach up a second time and pull the rest of the way off! To supplement the Casio Keyboard soundtrack, there are also several original cheesy pop-rock songs that I happened to love. They're sung by a female vocalist. One of them goes "Let me be your angel fire... Let me be your one desire..." and is listed as "AngleFire" in the end credits. Ha! You gotta love this kind of stuff, right? Making it even more amusing is the fact that Farmer made a 1993 film called Savage Vengance. Yessir, that's just how "vengeance" is spelled in the opening credits, though they did manage to get it right on the box.

Farmer followed this one up with many more enticing-sounding (but likely completely awful) flicks. CANNIBAL HOOKERS (1987) stars former "G.L.O.W." wrestler Sheila Best aka Tara the Southern Belle. Then there's the Melissa Moore double feature of SCREAM DREAM (1988) and VAMPIRE COP (1990). There's also Red Lips (1995) with Michelle Bauer, Vicious Kiss (1995) with Monique Parent, An Erotic Vampire in Paris (2002) with Misty Mundae, MISS MANIAC (2003; unreleased) with Linnea Quigley, Red Lips II: Eat the Living (2005) with Debbie Rochon, and the upcoming surefire classic CHAINSAW CHEERLEADERS (2008) with Tiffany Shepis and Debbie again. He also made the 1992 documentary Invasion of the Scream Queens, which featured interviews with Bauer, Moore, Mary Woronov, Brinke Stevens, Monique Gabrielle, Martine Beswick, Elizabeth Kaitan and others. The man sure loves his Scream Queens, doesn't he? Or maybe he just likes boobs. I did watch his 2005 film DORM OF THE DEAD (which also featured Shepis), which was absolutely terrible, but oh well. It's just so hard to resist some of this junk.

Demon Queen was released on two separate occasions to my knowledge - once on VHS from DTV crap specialists Mogul and another time on DVD by this website: http://www.b-movie.com/. 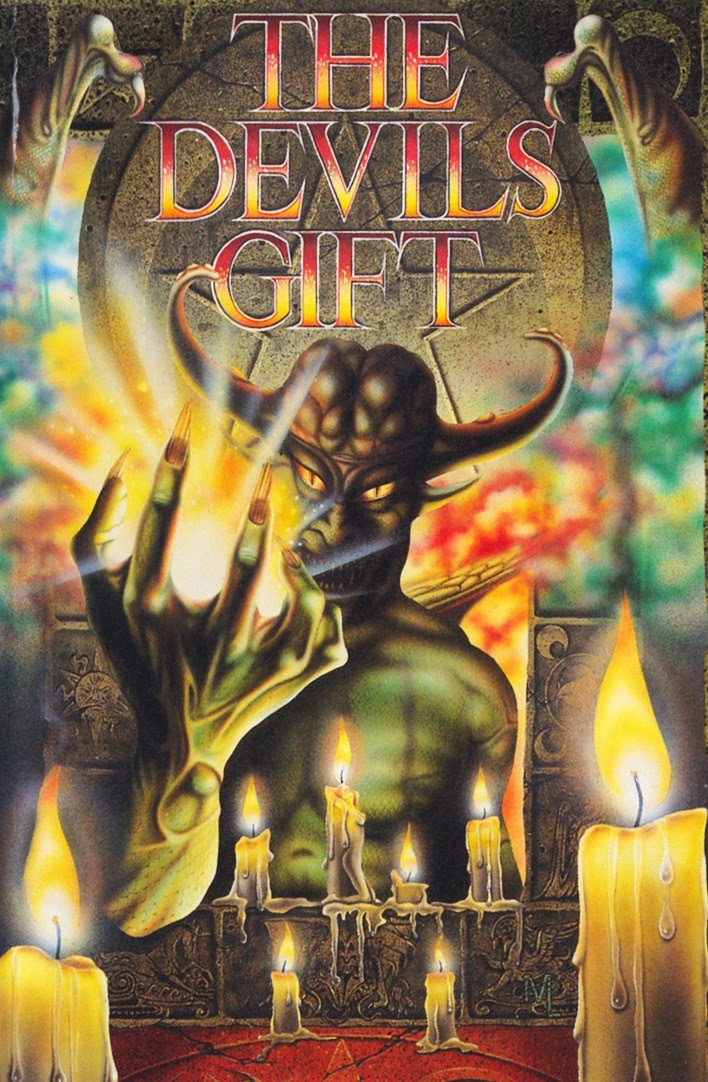 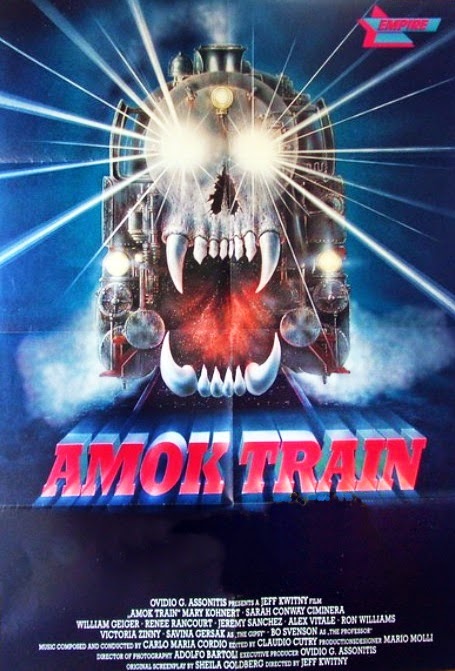 
Seven L.A. coeds take a "once in a lifetime" trip to Yugoslavia to witness an ancient Balkan rite. Among them is the unsullied Beverly (Mary Kohnert) who has bad premonitions about the trip and the "sign of the pagan virgin" birthmark on her stomach. After arriving overseas, some evil Serbian residents in a small town they are staying at attack them. Beverly is felt up while sleeping by a white-eyed toothless old woman who cackles, "Virgin!" The survivors board a possessed train and are slaughtered en route to delivering Beverly to her destiny. Watchable and interesting in spots, with good cinematography and location work, but also horribly acted (I mean horribly acted), senseless and irritating. To make matters worse, most of the gore scenes have been carelessly trimmed out of the U.S. release (at least the VHS release; I haven't seen the DVD), resulting in some jagged editing cuts. On the plus side, there's an excellent steel beam decapitation (plus some other fairly good gore effects), a decent ending and Savina Gersak is fun in the film's sole standout performance as a cigar chomping stowaway. Name value star Bo Svenson is miscast as a Serbian professor, but does a fair job with his role (and accent).

Despite the title, this film has nothing to do with the other Beyond the Door films as they've all just been re-titled for American distribution. The first (made in 1974) was a standard Exorcist rip-off with Juliet Mills going the Linda Blair route, the second (made in 1977) was a Mario Bava possession shocker better known as Shock and starring Daria Nicolodi as mother to a child who seems to be possessed by the spirit of her dead husband. This one was originally called either Amok Train or just The Train and was re-named. Not surprisingly, Ovidio G. Assonitis (who was partially responsible for The Curse non-"series" of films, as well) was the executive producer.