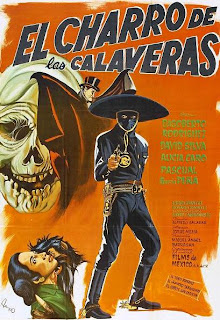 Not entirely sure of the origins of this one. It seems like either a serial or a proposed television program that was later edited into a feature film. Our hero is The Rider of the Skulls, a Zorro-like, horseback-riding crime fighter who wears a huge sombrero and an all black outfit with skull emblems (which change positions on his shirt depending on the segment). Just like Mexico's wrestling stars, he opts to keep his face covered the majority of the time. The origin of the character is laid out just like many other famous super heroes. After his parents were murdered by bandits, The Rider swore on their grave to spend the rest of his life fighting the forces of evil. He says he covers his face because he represents justice and his identity is not important. Or as he tells a young boy; "Justice... does not have a face." In this episodic 80-minute release, the Rider faces off against three different monster foes; a werewolf, a vampire and the headless horseman. It doesn't work smoothly as a feature because the continuity is off, including shifts in costume, character history and even actors playing the same role! 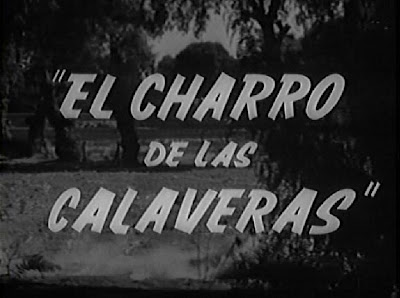 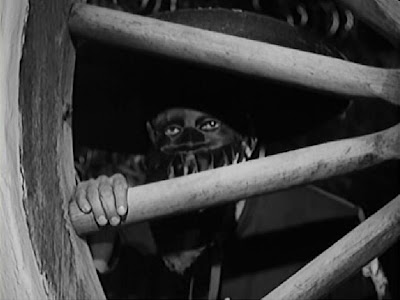 Our werewolf tale opens with a farmer getting out a quick prayer before a werewolf goes for the jugular (and rips his face off). Similar attacks have helped to cause those in a small village to haul ass out of town. A financially-strapped family; headed by stressed-out, sleeping-pill-popping sheriff Don Luis Salvatierra (David Silva), simply cannot afford to leave. His wife Lupe (Alicia Caro) and stepson Perico, the latter ill ever since he himself spotted the monster, allow The Rider (Dagoberto Rodríguez) to come stay in their home until the creature can be killed. A cackling witch who lives in a graveyard raises a faceless corpse from the dead, which informs The Rider that Don Luis is the werewolf. This leads to a fist fight and a tumble down a rocky embankment. This segment has a fun enough cut rate werewolf design and cheap-o three-edit dissolves (man to skeleton to werewolf) to illustate transformation. At the end, The Rider decides to adopt young Perico and take a sidekick in the cowardly and thoroughly obnoxious Cleofas (Pascual García Peña) - typically annoying 'comic relief' - and allow them to come along on his other adventures. He also removes his mask and shows the two of them his face. 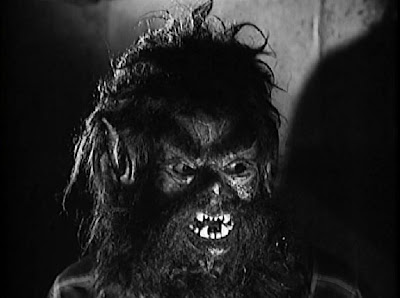 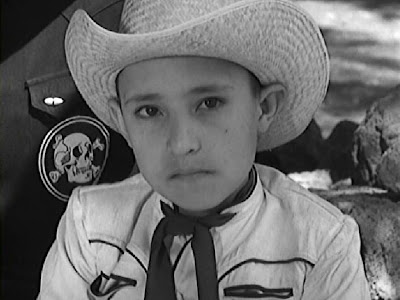 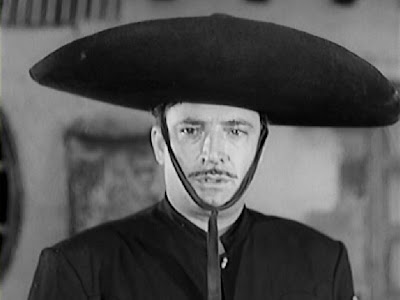 As tale #2 begins, you'll notice something different right away. For starters, the Rider of the Skulls' costume has changed. His skull emblems have moved from the back and sleeves to the front of his shirt. Instead of a black handkerchief with the eyes cut out, he now wears a black hood over his entire head. And it wouldn't surprise me if it were a completely different actor underneath the costume. In fact, I'm sure of it since the character's physique has changed. Even more strangely, "Perico" has miraculously transformed into "Juanito" and is played by a different child actor. Unfortunately, Cleofas is the same actor doing the same schtick. 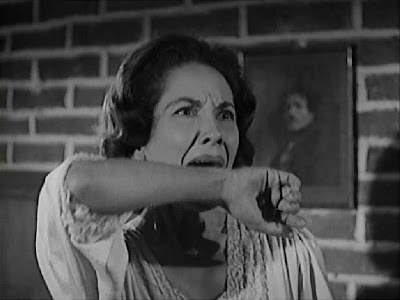 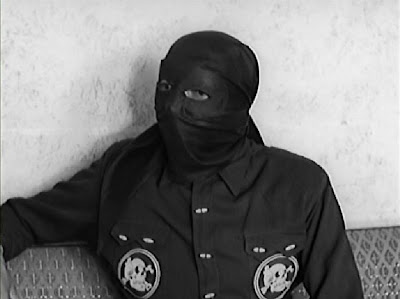 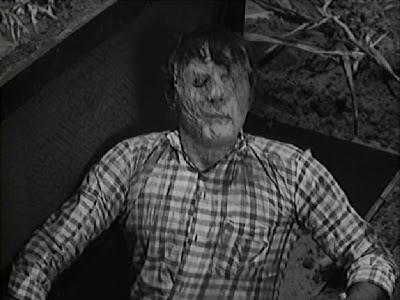 Numero dos centers around a caped, ugly-faced vampire, who transforms into a rubber-bat-on-a-string. The vampire has been busy feasting on villagers, and sets his sights on a young señorita named Maria after killing her father. At the end of the first segment, the Rider had removed his mask so that his travelling companions (and we, the audience) could see his face. In this segment, the kid tells Maria that no one has ever seen his face. And the inconsistencies between the segments don't end there. Hell, discounting the first story, there are even inconsistencies within just this segment. Maria tells The Rider that she wants to avenge the death of her parentS, and yet her mom was safely in bed last we saw. The vampire's lair starts as a crumbling old hacienda, but five minutes later he's suddenly living in a graveyard... 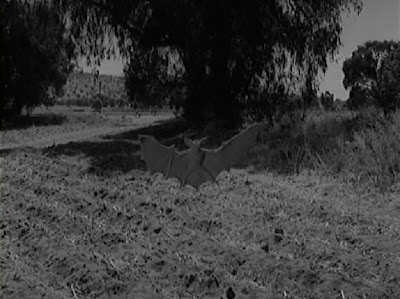 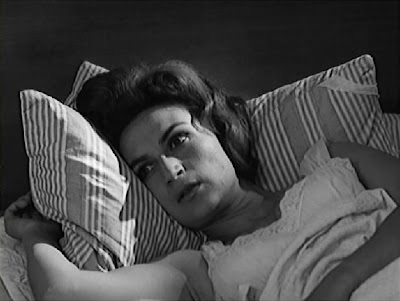 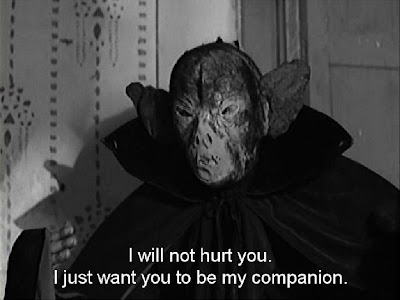 Finally, we get to the very strange sight of the Headless Horseman galloping down a dirt trail on his horse. Just as in the other two tales, he's first seen laying waste to a poor fella walking down the road. His buddies, a pair of robed, skull-faced Grim Reapers, tell him his day of vengeance is coming soon. Meanwhile, a young woman named Gloria opens a box that belonged to her deceased grandfather and finds a living head inside! It instructs her to re-attach it to its body. She tries to bury it, but it miraculously reappears in her room. Gloria learns that the head belongs to a bandit who was executed years earlier and, to finally get rid of the damn thing, she decides to trace it back to its owner and reunite it with the body. One thing leads to another and The Rider, Cleofas and Gloria find themselves tied up and being threatened with a sword by the Horseman (who finally gets his head back on). Young Juanito unties them, The Rider and The Horseman get into a sword fight where one (hmmm... guess who?) ends up slain and a sudden thunderstorm strikes the skull dudes down. 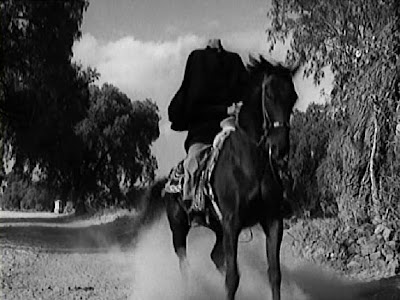 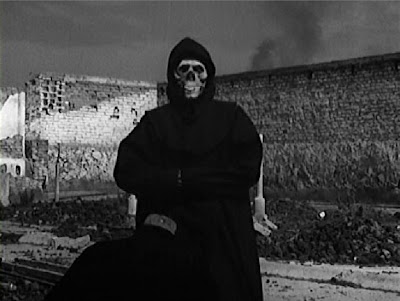 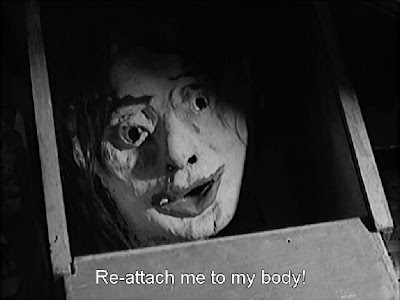 In tone and execution, the whole thing seems like a children's matinee movie... but what other kiddie movies can you think of with faceless zombies, talking severed heads, werewolves ripping out throats and drunken bums stumbling into ladies bedrooms for some lovin'? The film is also notable for containing more fainting than a Justin Bieber concert. Considering the wide variety of papier-mâché creations on display, it can't help but to provide some entertainment (looking over these screen caps I realize just how amazingly nutty this whole thing must look), though well-executed it is not. 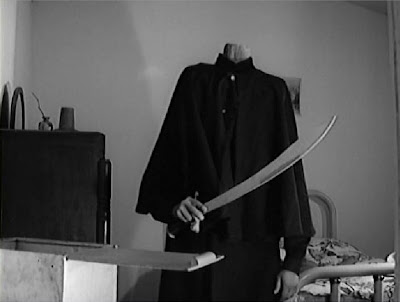 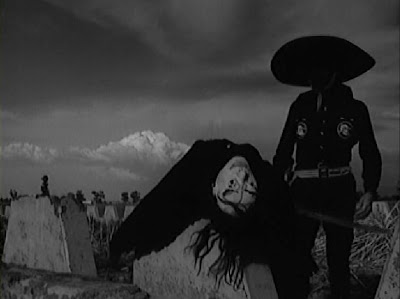 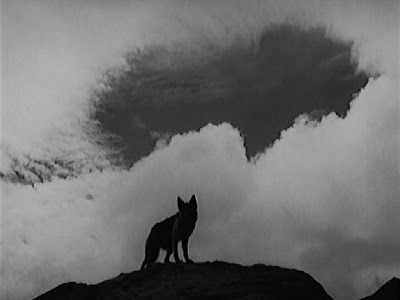 Never released theatrically in the U.S., in 2010 this was finally released on a double DVD by Lion's Gate, who have paired it with the non-horror El asesino enmascarado (1962).