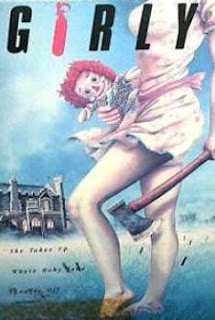 ...aka: Mumsy, Nanny, Sonny and Girly

Directed by:
Freddie Francis
The popular idea of an entire deranged family (or surrogate family unit) seems to have really taken off in the 1970s with the release of such films as THE TEXAS CHAINSAW MASSACRE (1974) and THE HILLS HAVE EYES (1977) and continues strong to this day. Before those, we had Jack Hill's wonderfully twisted SPIDER BABY (1964; released in 1968) and this equally bizarre British effort from renowned cinematographer and frequent genre director Freddie Francis. At a secluded manor, a joyous, very wealthy family of four; matriarch Mumsy (Ursula Howells), daughter Girly (Vanessa Howard), son Sonny (Howard Trevor) and housemaid Nanny (Pat Heywood), seem to shy away from normal household conventions. They believe in simple pleasures such as play time, knitting, trips to the park and zoo and tea in the afternoon; always opening their home to new "friends" along the way. The problem? They're all homicidal maniacs and the "friends" (usually bums, drunks or others whose disappearances may not be a priority to police) are eventually murdered when they wear out their welcome or threaten to leave! Into the home comes their latest guest, known only as New Friend (Michael Bryant), who is blamed for the death of his drunken date (Imogen Hassall) after a lethal (and non-accidental) fall from a playground slide. But New Friend isn't about to be "sent to the angels" without putting up a fight, and tries to manipulate the ladies in the house into turning on one another.
Based on the play Happy Family by Maisie Mosco (adapted for the screen by Brian Comport), this is a fairly original black comic horror film with effective performances, plenty of surprises and a very sick sense of humor. The shocking antics of the family are relayed with a very casual and nonchalant touch by the actors, which makes the humor all the more ghoulish. A good example is when Mum finds a head boiling in a pot on the stove and turns to her daughter, saying "Girly!" with that motherly tone a parent reserves for their child when they do or say something surprising, yet amusing. Another interesting touch (which is likely a homage to PEEPING TOM) is that Sonny films the murders, which the whole family watch later on as a normal family would their vacation videos.
All of the actors are good (Michael Ripper also has a throwaway cameo as a zookeeper), but the clear standout is little-known British actress Howard. As the provocative, emotionally-stunted Girly (a grown woman stuck at about age 7), Howard creates a character worth remembering; fluctuating between child-like innocent, finger-sucking jailbait seductress (a la LOLITA) and dangerous psychopath with astonishing ease. It's a shame that the attractive and clearly talented actress had such a short-lived career that lasted only about five years. Supposedly, she became disillusioned when several of her latest pictures (including this one and the 1971 psycho-thriller WHAT BECAME OF JACK AND JILL?) barely got released. She also appeared in BLOOD BEAST TERROR (1968), CORRUPTION (1968) and the TV-movie THE PICTURE OF DORIAN GRAY (1973) before throwing in the towel, would go on to marry Oscar-winning producer Robert Chartoff (RAGING BULL, ROCKY) and start a family.
Released on video in the 1980s on the Prism label, GIRLY is unfortunately not on DVD as of yet. Scorpion Releasing have announced a 2010 release. If that happens, this will likely pick up a nice-sized and much-deserved cult following.
★★★
Posted by The Bloody Pit of Horror at 1:49 PM No comments: 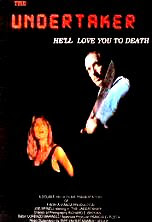 ...aka: Death Merchant, The

Directed by:
Franco De Stefanino
The last hurrah for character actor Joe Spinell, who appeared in everything from THE GODFATHER (1972) and ROCKY (1976) to TAXI DRIVER (1976) and CRUISING (1980) yet remains best known to us horror buffs for producing, writing and starring in the gory 80s psycho flick MANIAC (1980). Spinell wanted to do a sequel to that film and even shot a 10-minute promo with Buddy Giovinazzo (COMBAT SHOCK) in 1986. While he and the director searched for funding, Joe appeared in a half dozen other films to help pay the bills. This was one of those... and it turned out to be his final film performance. After securing the funding for MANIAC 2, Spinell was found dead in his apartment in January 1989 of undetermined causes that people still speculate about to this day. But the question remains: Is THE UNDERTAKER an enjoyable final showcase for the late, great actor? I'd say yes and no. It's a cheap and uneven exploitation flick and Spinell certainly deserved better material than this, but it's also quite fun and I can't say that I was ever bored watching it. Spinell seems in pretty bad health throughout and some of his dialogue is unintelligible, but he does gets to sob a lot and do those great bug-eyed intense looks while killing, which will instantly bring MANIAC to mind.
Roscoe Holland (Spinell) is an undertaker who runs his own funeral parlor alongside his completely oblivious, borderline-senile wife Hazel (Martha Somoeman). Roscoe's also a serial killer who stalks, attacks and kills young women, indulging in necro fantasies with the corpses, which he keeps stored in a special room in the cellar. Roscoe's orphaned nephew Nicholas (Patrick Askin) has vague memories of being sexually abused as a child by his uncle and suspects he's up to no good. The only person he has to confide in is his anthropology professor, Pamela Hayes (Rebecca Yaron). When Nicholas gets too nosy, he's knocked out, gagged, tied up and kept prisoner in the celler and when he isn't heard from again, Pamela and her roommate Mandy (Susan Bachli) start doing some investigating of their own. Some detectives, led by Inspector Barry (William James Kennedy, who wrote this), are also on the case.
Sufficient amounts of blood and gore? Check. High body count? Check. Sex and nudity? Check. Moderately fast pace? Check. Thoroughly depraved psycho killer? Check. I'd say this B-grade slasher pretty much does what it's expected to do. The dialogue's a bit cheesy, but that's just part of the fun, and while the supporting cast is mostly amateurish, the actors are likable and natural enough not to annoy. The main problem is that all available prints of the film are in God awful condition. The one I saw looked like a third generation VHS dupe.
Strangely, enough footage was filmed to release this in two drastically different forms. This one, and one titled THE DEATH MERCHANT (which was released in 1991). In the latter, Spinell's character targets females who do aerobics and work out. Code Red announced they'd be releasing this on DVD in 2008, but it hasn't happened yet.
★★
Posted by The Bloody Pit of Horror at 2:38 AM No comments: 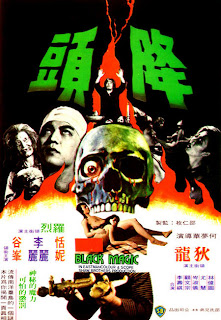 ...aka: Black Magic
...aka: Gong tau
...aka: Hex
Directed by:
Meng Hua Ho
Handsome engineer Xu Nuo (Ti Lung) is busy at work on a new high rise construction job when he sparks the interest of young, pampered and obscenely wealthy widow Luo Yin (Tanny aka Tien Ni). Luo isn't the type of girl to take no for an answer and finds herself frustrated that she's unable to seduce Xu away from his kindly school teacher fiancee Quying (Lily Li). Luo also has an unwanted admirer of her own in Jiajie Lang (Lo Lieh), a small-time hood interested in both her beauty and her money. If things couldn't get messy enough, Jiajie decides to get a little help in winning over Luo by going to a backwoods black magician named Shan Jianmi (Ku Feng) who, for a high price, can cast life, death and love spells. After acquiring some of Luo's hair (which must be pulled out by the root) and her footprint cast in mud, a love spell is cast but it only temporarily works because Jiajie can't afford to pay for it. As a result, Jiajie has a death curse placed upon him. Luo, realizing the spells actually work, decides to have Shan place one on Xu for her, getting him to run away with her right after his marriage. She also can't resist putting a death curse on Xu's wife to get her out of the way. An equally powerful rival magician named Master Furong (Ku Wen Chung) is eventually called in to do battle with Shan.
It's fun, entertaining, colorful and manages to work in all kinds of assorted icky stuff. There are maggots, worms and snakes galore, plus gore, tongue-slicing, puking, burning decapitated heads, torn-out livers, bodies time-lapsing into dusty skeletons and a finale set atop the construction site featuring all manner of cheesy laser effects. And did I mention female spells require fresh breast milk that we actually get to see being squeezed out? Yep, that too. It's a Shaw Brothers Production; an atypical one at that, with soap opera dramatic and horror instead of martial arts. An unrelated "sequel" GOU HUN JIANG TOU (aka BLACK MAGIC II and originally released in the U.S. as REVENGE OF THE ZOMBIES) followed from the same director and featured most of the same cast.
Image Entertainment put out a "Shaw Brothers Special Edition" DVD in 2006; which is a top quality print.
★★1/2
Posted by The Bloody Pit of Horror at 12:00 AM 1 comment: