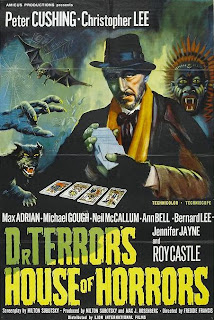 
Neither the best nor the worst anthology from either Amicus or director Francis. The film is generally well-made, the cast is good and it's entertaining, but it also suffers from trying to cram too many stories (five of 'em, plus a lengthy framework) into just an hour and a half. This results in three of the five tales being sadly underdeveloped. Late one evening, five different well-groomed men board the same compartment on a train for presumably an all-night trip. Mysterious occult / metaphysics expert Dr. Schreck (Peter Cushing, with fake caterpillar eyebrows and a German accent) becomes the sixth. A few of the men help Scheck pick up his belongings after he drops his bag and notice he's in possession of a deck of tarot cards. Franklyn Marsh (Christopher Lee) labels it "nonsense" and accuses Schreck of being a charlatan, but the other men are interested in having their fortunes told. All they have to do is tap the cards three times, then they're shuffled and dealt. The first four cards foretell destiny and the fifth gives him the knowledge to change it if he so chooses. Well, unless it's already too late.

After selling his ancestral house, located on a foggy island, architect Jim Dawson (Neil McCallum) gets the opportunity to go back to help its new owner - wealthy and attractive widow Deirdre Biddolph (Ursula Howells) - with some alterations. She wants to tear down a wall to create a large room to showcase her deceased archeologist husband's collection of artifacts. Also living there are a groundskeeper Caleb (Peter Madden) and his granddaughter Valda (Katy Wild), who both lurk around acting mighty suspicious. Jim gets to work on the renovation, but discovers a coffin behind a newly built wall in the cellar. The coffin - decorated with an ornate wolf head - supposedly belongs to one Cosmo Waldemar, who was rumored to be a werewolf and has a grudge to pick with the Dawson family for a wrongdoing centuries earlier. Cosmo's body disappears from the coffin, wolf tracks are found on the dirt floor, howling is heard at night and Valda turns up dead after trying to warn Jim of something. He makes silver bullets out of a heirloom cross and waits by the coffin... Cramming all of this into just over 10 minutes turns out to be a mistake, since it's poorly paced and underbaked. The 'werewolf,' by the way, is just a dog.

Upon returning from holiday, Bill (Alan Freeman) and his wife Ann (Ann Bell) notice a strange vine growing alongside their home. The plant seems to cry out in pain when hit with a hoe and even knocks a pair of shears out of Bill's hand when he tries to snip it! The family seeks the aid of a few scientists (including Bernard Lee), who draw the conclusion that this is the new evolution in plant which may take over the planet if not stopped. It's superintelligent (enough so to cut the phone line!), kills the pet dog when it digs at the roots, strangles one of scientists and eventually surrounds the entire home, trapping the family inside. But like most other living beings, it's scared of fire. Potentially interesting segment but again it's too short and could have used some fleshing out. The open ending won't sit well with some viewers.

In our next story, jazz trumpeter and all-around goofball Biff Bailey (Roy Castle) gets a gig at the Flamingo Club on an island in the West Indies. Though he's warned against it, Biff sneaks out at night to attend a voodoo ceremony, where he copies down the catchy music of the "Great God Damballah." Natives warn him not to use, but when he returns to London he does anyway, which leads to wind destroying his club and an evil presence following him home. Much better than the first two segments, this seems paced about right, is amusing, has several great musical numbers and a surprisingly non-horrific or mean-spirited finale. By the way, the misleading title for the film comes from this segment: the lead characters passes by a mock "Dr. Terror's House of Horrors" poster on a wall stating its stars are "Franklyn Marsh," "Sandor Shreck" and "Biff Bailey!"

Back on the train, Dr. Schreck finally convinces Mr. Marsh / Lee to have his fortune told. Marsh is a snooty, uptight art critic who gets his jollies humiliating artists with bad write-ups in the local paper. During a showing of work from painter Eric Landor (Michael Gough), the tables are turned when it's Marsh who gets humiliated by praising a painting done by a chimpanzee. Landor continues to harass Marsh by constantly referencing the incident to destroy his credibility. Fed up, Marsh runs him over with his car, severing his hand in the incident. Unable to paint, Landor gets depressed and commits suicide. But Marsh gets his just desserts in the form of a living, disembodied hand that never seems to go away regardless of what Marsh does to it. This segment is the most memorable of the bunch, has one of the more enjoyable Lee performances and the special effects on the crawling hand are surprisingly effective.

Finally, things wrap up with a rather ordinary vampire tale. Doctor Bob Carroll (Donald Sutherland) has just taken a new bride - the sexy Nicole (Jennifer Jayne). Nicole disappears late at night every night; turning into a bat and going out to do her bloodsucking thing. Meanwhile, a young boy shows up at Bob's clinic with a bad case of anemia and puncture wounds on his neck. Strangely, this segment completely ignores the vampires cannot go out in the daytime mythology but sticks to the rest (turning into bats, being afraid of crucifixes, being killed with a stake through the heart, etc.). There's a cheeky end twist involving Bob's boss, Dr. Blake (Max Adrian), which is the only thing to breath any life into this tired tale. We return to the train for the final twist involving Dr. Schreck and the passengers, which is rather predictable itself.

What would have greatly improved this would have been to cut out one of the lesser segments, preferrable the werewolf one since it's the weakest, least interesting and boasts the lamest twist of the bunch, and then used that saved time to expand upon the other two weaker tales. The "Voodoo" and "Disembodied Hand" stories work just fine as they are, as does the framework itself thanks to the wonderfully sinister Cushing. It's worth watching for these... just expect some lulls along the way.

Francis also made the Amicus anthologies TORTURE GARDEN (1967) and TALES FROM THE CRYPT (1971) as well as the non-Amicus TALES THAT WITNESS MADNESS (1973). The widescreen German DVD from Koch Entertainment is the one I viewed (their title translates to something like "Death Cards of Dr. Schreck"). It was distributed by Anchor Bay in the UK and might finally be getting a DVD release in America later this year through Olive Films (though I wouldn't hold my breath waiting).