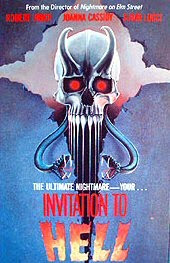 Directed by:
Wes Craven
After ten years of struggling to get by, the Winslow family are finally starting to move up in the world. Dad Matt (Robert Urich) has landed a lucrative position with Micro-Digitech, where he'll be in charge of designing a heat-resistent space suit that may be used for a future trip to Venus. Destressed mom Patricia (Joanna Cassidy) will finally be able to relax and redecorate, while computer-wiz son Robbie (Barret Oliver, THE NEVERENDING STORY) and young daughter Chrissy ("Punky Brewster" Soleil Moon-Frye) will be able to live in a decent neighborhood for a change. The happy family of four move into their comfortable new home and are welcomed by Matt's former college chum Tom Ferguson (Joe Regalbuto) - who's also employed by the same company - his wife Mary (grown-up "Bad Seed" Patty McCormack) and their kids. With good money rolling in and good friends living nearby, it seems like the recipe for suburban bliss. But things aren't quite what they seem at work, with intense pressure coming from Matt's boss Mr. Thompson (Kevin McCarthy) and nearly all of his co-workers (including Tom and family) to join something called "The Club."
.
Everyone who's someone in the area seem to be members of the Steaming Springs Country Club, a sprawling resort complete with a large gym, garden, pool and golf course and run by the glamorous Jessica Jones (Susan Lucci). While Patricia finds herself seduced by the charming Ms. Jones, Matt himself is more reluctant. The fact he's just not a "joiner" combined with the sheer amount of strange coercing going on is making him a wee bit apprehensive. The strange disappearance of his secretary Grace (Virginia Vincent), who tried to warn him about something before she was mysteriously replaced by a younger, sexier model, compounds his worries. And after his wife and children start behaving strangely immediately after becoming members, Matt's dead set on getting to the bottom of things. During a clumsy opening sequence, we've already bore witness to Jessica getting run over by a car, popping back up unscathed and then frying the guy who hit her, so we already know she's not quite human. In fact, she's actually Satan herself and the club's sauna (which requires a "666" pass code to enter) is housed on top a portal that leads directly to Hell!
.
I've gotta give this made-for-TV effort credit for going in a bizarre direction I wasn't expecting. By the end, we have our hero dressed in a heat-resistent astronaut suit traversing matte hell to try to locate his family, who have been replaced by evil doubles on Earth but are being held prisoner behind blue forcefields in the alternate realm! There are pinches of INVASION OF THE BODY SNATCHERS (the casting of McCarthy is a definite wink) and THE STEPFORD WIVES here, and though it's hokey at times, the premise and setting (a Silicone Valley type area) open up a world of metaphoric possibilities. Richard Rothstein's script manages to touch on the loss of identity when venturing into the corporate machine, the anonymity and materialism of high end suburban living, how professional success can take a toll on relationships with our spouses and children, how individuality is often frowned upon (if not completely stamped out) the higher up the food chain you go and, of course, corporate/big business dishonesty.
.
The performances are uniformly good here. Urich (who passed away in 2002) gives a winning and very likable central performance as a man insistent on not compromising himself or his principles simply because he's financially better off. Soap opera bitch queen Lucci is cleverly cast (a bit campy at times, but that's OK here) and there are small roles played by Nicholas Worth (from Craven's HILLS HAVE EYES PART II) as a sheriff, familiar character actor Bill Erwin as a veterinarian, Billy Beck as a mover and Michael Berryman, who can be seen for about three seconds walking up a flight of stairs. Dean Cundey was the cinematographer.
.
There was a video release from Sony, and a 2003 DVD release from Artisan.
★★1/2
Posted by The Bloody Pit of Horror at 6:02 PM No comments: