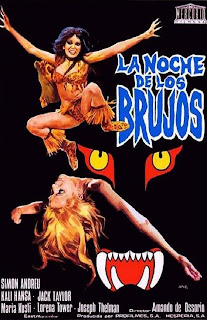 In the fictional country of Bumbasa in Africa, a screaming white woman in stripped, whipped, bit on the neck and has her head chopped off by a group of natives. Some soliders stumble upon them and gun down the entire tribe. Then the white woman's head suddenly comes to life and sports some vampire fangs. Cut to "present day," as a five-party expedition arrives in the same area. Professor Jonathan Grant (Jack Taylor) is doing an article on endangered species, with assist from his photographer Carol Harris ("Lorena Tower" / Loreta Tovar). Rod Carter (Simón Andreu) is a guide and big game hunter assisted by his girlfriend Tanika (Kali Hansa). And rich bitch Liz Meredith (María Kosty) is just along for the ride since her father financed the trip. They set up camp near a neighboring village and decide to spend the night, with plans of moving on the next day. Fur trader Munga ("Joseph" / José Thelman) stumbles upon their camp, tells them that even the animals are too scared to come around the area and lets slip that near where they are is a sorcerer's sacrificial altar where it's rumored that sacrifice humans to "the voodoo devil Yaru." He warns them not to stray into the jungle after dark. 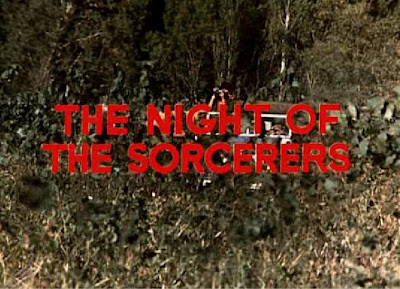 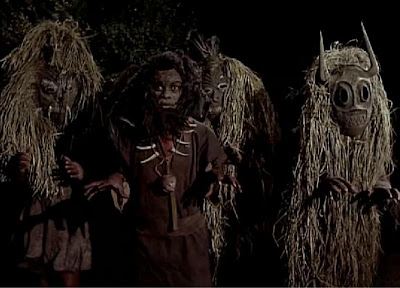 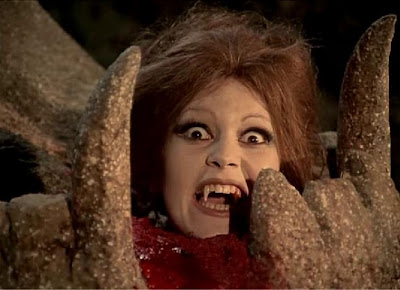 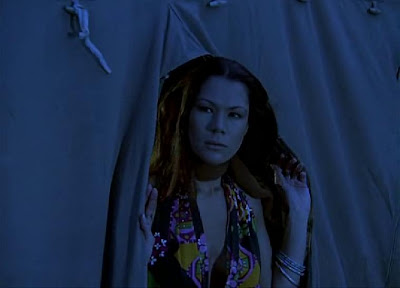 Just to play it safe, Rod and Jonathan decide to alternate guarding their campsite that night. Rod is up first and decides to protect everyone by having sex with Tunika, giving Carol the opportunity to sneak out. She wants to photograph a voodoo ceremony and gets more than she bargains for when she stumbles onto the resurrected dead and a vampire queen (Bárbara Rey) who can't wait to make her one of their own. Carol goes through the same routine as the lady in the opening sequence: whipped, stripped, bit and decapitated. Now she's a vampire. The next day, with Carol missing, everyone's forced to stick around until she comes back. The next evening it's a wash, rinse and repeat as one of the men is drowned while developing photos, another of the ladies disappears and the remaining duo must come face to face with the vampire-zombie cult. 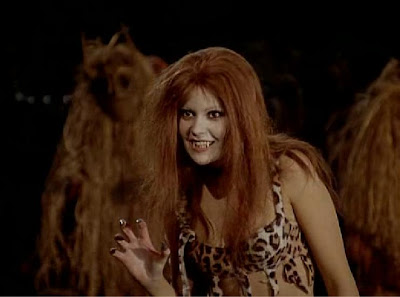 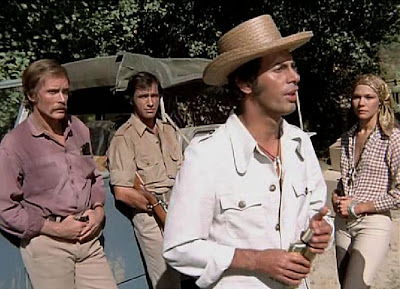 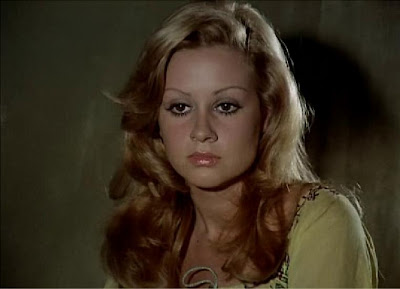 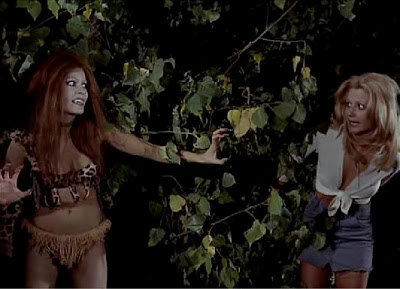 While this may well be the best movie ever made about hot vampire chicks in leopard-print bikins running around in slow motion you will ever see, as a horror movie, it's only about a 3. Sadly, I couldn't really get too enthused about this voodoo jungle cheese from the director of the Blind Dead quadilogy. In theory, it seems like this might be fun. And it could have been fun. But it's not. What keeps it from being a good guilty pleasure are the characters. Nearly every single person in this movie is annoying and unlikable. Tunika, for instance, is an insecure control freak who's paranoid about letting her boyfriend out of her sight, for fear that he's going to sleep with one of "the blondes." There's constant mention of "the blondes." When Tanika is left alone at camp, the fur trader shows up to try to rape her and tells her she might as well just have sex with him willingly because Rod is gonna dump her anyway for one of "the blondes." When one of "the blondes" finally retaliates, she calls Tanika a "dirty brunette." I have no clue what this silly hair war was all about but I'm pretty sure De Ossorio saw Martine Beswick enslaving the fair-haired in PREHISTORIC WOMEN (1966) before he wrote this stinker. 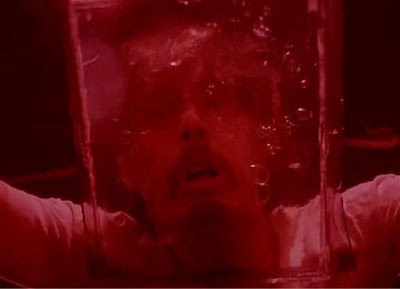 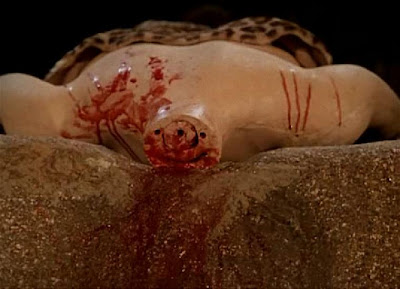 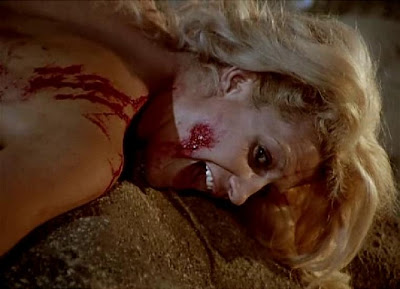 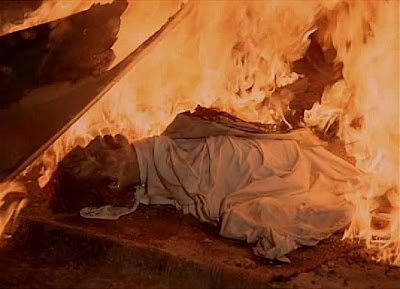 The hateful characters aren't the only thing that's monotonous and repetitive: so are the horror scenes. The three primary set pieces are almost identical. At the sorcerer's altar, burial mounds put off smoke, zombie natives magically appear on top, the vampire lady shows up, does her routine on the female victim and it ends with a mannequin head being lopped off. The ever-smiling vampire queen and her new female inductees into blocksuckerdom, all with teased hair, plastic fangs and an outfit that consists of a leopard-skin bra, leopard-skin cape, a grass miniskirt and fringe covered leopard boots, are seen about a dozen times doing their slow mo frolicking through the woods. Since this wasn't actually filmed in Africa, stock footage of elephants, giraffe, birds and leopards have been inserted here and there for that jungle feel... and so have some ridiculous close-ups of stuffed leopard heads. There's also an out-of-place flashback that serves no purpose whatsoever. Any fun that happens to eminate from this one stems from what a blast Rey and Tovar appear to be having playing the vampire chicks. 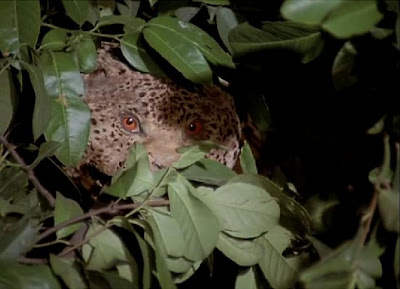 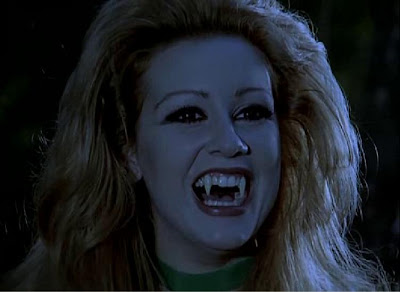 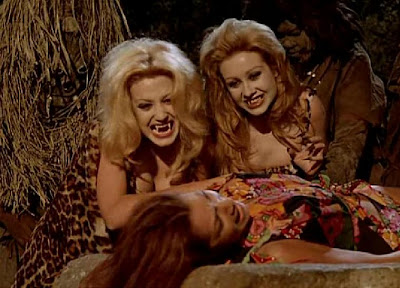 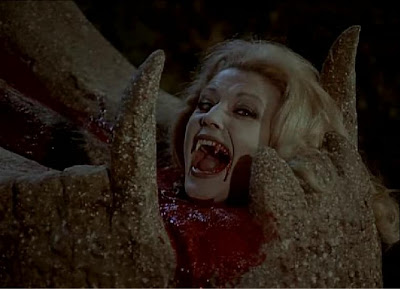 The original U.S. video release was from Unicorn. A nice, clean print was released on DVD through Deimos in 2007. Some versions replace the nude scenes with clothed ones, which are contained as one of the features on the DVD. As if anyone's interested in seeing those!