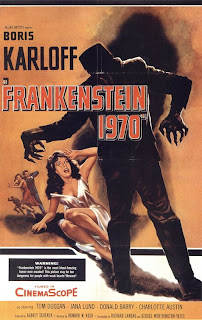 You can almost imagine the creators of this one sitting in an office successfully pitching their product to backers. For starters, Hammer's THE CURSE OF FRANKENSTEIN and American International's (I WAS A) TEENAGE FRANKENSTEIN were both big hits the previous year. Secondly, there's the novelty of having Boris Karloff, most associated with his role as "The Monster" in the classic Universal series of course, being able to tackle the mad doctor role for the very first time in a contemporary setting. Throw in some atomic age mumbo jumbo (very on-trend in the 50s) and some then-high tech lab sets located in catacombs beneath a Gothic castle and you've got a fairly clever premise that blends the old with the new. While the results are far from spectacular, this also isn't the complete washout I've seen it written off as either.

To celebrate the 230th anniversary of the writing of Mary Shelley's book, a small crew travels to Germany to film the pilot for a proposed TV series. They chose Castle Frankenstein as their shooting location and even tap sinister, facially-scarred Baron Victor Frankenstein (Karloff), the weary last descendant of the legendary family, to be one of the show's stars. Little do they know, but Victor's actually splicing together his own hulking monster in his lab... and he needs fresh body parts! When his kindly servant Shuter (Norbert Schiller) discovers what the mad doc is up to, he's hypotised, murdered and has his organs removed and transplanted into the creature. Instead of utilizing lightning (hey, this is 1958!), Victor sticks it in his "atomic steam generator" and is able to bring the monster (which is bandaged from head to toe) to life. The only catch is that it still needs a pair eyeballs...

The list of proposed organ donors includes film director Douglas Rowe (Don 'Red' Barry), starlet Carolyn Hayes (Jana Lund), script girl Judy Stevens (Charlotte Austin), publicist Mike Shaw (Tom Duggan), cameraman Morgan Haley (John Dennis) and even Victor's own friend and colleague Wilhelm Gottfried (Rudolph Anders). Karloff gets plenty of screen time here; some call his performance campy, and perhaps it is, but he's still a lot of fun to watch here. Still, we have to deal with the uninteresting love lives of the side characters. The director has the hots for his lead actress, but she's not interested, and the publicist is in love with the script girl, but she's the director's ex-wife and still carries a torch for him, etc. Though Karloff completely dominates the proceedings, Austin (who starred in the Ed Wood-scripted THE BRIDE AND THE BEAST the very same year) is the only one who manages to stand out amongst the supporting cast.

The sets are quite good (especially considering the 110K budget) and it was shot in Cinemascope, but the film suffers a lot from pacing problems and drags in the middle after a very promising and amusing opening twenty minutes. We also never get a look at the square-headed monster (played by Mike Lane) as it's covered from head to toe in bandages the entire time. In fact, the French release title of this translates to FRANKENSTEIN VS. THE INVISIBLE MAN!

It was released on VHS in 1997 by Warner Home Video (a pan/scan presentation) but wouldn't make its way to DVD until October of 2009 on the box set "Karloff & Lugosi Horror Classics," which is also distributed by Warner. The other titles on the set are THE WALKING DEAD (1936), YOU'LL FIND OUT (1940) and ZOMBIES ON BROADWAY (1945).