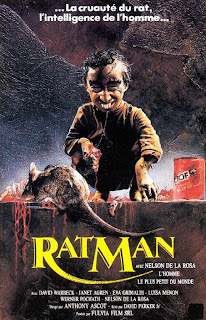 2'4" Dominican Republic native Nelson de la Rosa was certified as "the smallest man on Earth" by the Guiness Book of World Records in 1990. Several years before achieving that claim to fame, the diminuative fella had already been 'discovered' by thrifty exploitation filmmakers, who gave him the lead role as a mutant rat/monkey hybrid that runs amuck on a barely-populated Caribbean island. Hey, saves on special effects, doesn't it? Unfortunately, despite de la Rosa's presence, the film itself is something of a bore. There's a little blood, a little nudity, a few familar faces for the faithful and some decent shooting locations, but it's dark, slow-moving, flatly presented and badly-written, with lousy dialogue, a bare minimum of plot, uninteresting characters and absolutely no motivation for its mad science premise (the guy who creates "Ratman" is basically shoved off to the side). The cherry on top is that it's saddled with a groaner of an ending.

On the aforementioned island paradise, sleazy fashion photographer Mark (Werner Pochath), his assistant Monique (Anna Silvia Grullon) and two blonde models; Marilyn (Eva Grimaldi) and Peggy (Luisa Menon), are busy at work taking advantage of the beaches for a swimsuit photo shoot. Too bad for them that it's on the same island a scientist's lab experiment has escaped its cage. Equipped with oversized fangs and razor sharp claws, 'Ratman' makes short work of Peggy while she's out taking a midnight stroll. Strangely, Marilyn's sister Terry (Janet Agren) is informed that her sister has been killed and arrives to ID the body. On the way there, she bumps into mystery novelist Fred Williams (David Warbeck) and he decides to accompany her to the morgue. When Terry discovers the corpse isn't actually her sister she's called back in a second time to ID another body that turns out to not be her sister either. Oops!

Terry and Fred then set out to locate Marilyn, who has ventured inland with Mark and Monique to take more photos. After Monique is killed and her body is discovered, Mark and Marilyn take off and end up stranded at the scientist's home. Guess who else eventually shows up to terrorize them? Can Terry and Mark make it to the home in time to save the sister? I doubt you'll even care by that point.

Warbeck and Agren (previously paired in the dreary and derivative monster flick PANIC in 1982) are saddled with incredibly boring scenes and are given nothing of interest to do. Though third billed, most of the weight is actually carried by the voluptuous Grimaldi, who has to try to survive the night trapped in the house with the lethal lil monster and is also responsible for providing all of the film's nudity, including a lengthy shower scene which is probably the most memorable scene in the entire movie.

Despite the somewhat degrading nature of the role, de la Rosa is used effectively in a handful of scenes. After appearing in this and gaining the Guiness notoriety, he'd go on to become friends with Red Sox pitcher Pedro Martinez (and would frequently be seen at games), got to appear alongside Marlon Brandon in the badly received THE ISLAND OF DR. MOREAU (1995) and gained employ in a circus. He passed away in 1996. The director (billed as "Anthony Ascot") also made the giallo THE CASE OF THE BLOODY IRIS (1972).

Though released on VHS and DVD in many countries, this one has never been officially released in the U.S. The original title translates to something like House at the End of the Park, but was given the tongue-in-cheek RATMAN title for distribution in the UK. Other DVD's released elsewhere carry the uber generic TERROR HOUSE title.

Posted by The Bloody Pit of Horror at 7:49 PM 3 comments: