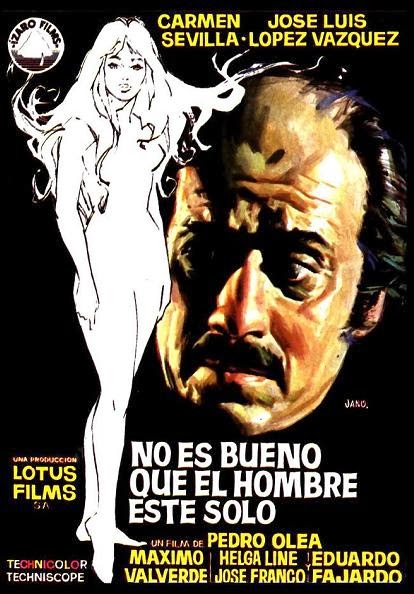 
From all outward appearances, middle-aged Martin Freire (José Luis López Vázquez) seems to have a pretty good life. He has a large home filled with expensive artwork and a nice view of the sea, a good job in the shipping industry (and is about to get a major promotion), plenty of money and a loving and beautiful wife named Elena. So why is he so secretive? Why does he have three industrial strength locks on his front door? Why does he make sure to lock his garage behind him every time he takes the car out? Why are the shades always drawn? And better yet, how come no one has ever met Elena and why does she never seem to leave the house, even to accompany her husband to important business dinners? Martin claims she's been ill, but watching her interactions with her husband and listening to her speak, nothing appears to be wrong with her. One could assume Martin is so insecure that he's keeping her prisoner there, but that doesn't appear to be the case either. He's kind to her, buys her flowers, carries her to bed every night and buys her stockings just like his sexy secretary Mónica (Helga Liné) wears. So just what gives? Well, if I said Elena was actually a doll, I'd be meaning it every sense of the word...

Yes, Elena is a doll. A life-like, life-sized mannequin to be precise. Martin had lost his wife years earlier in an auto accident (on their wedding day no less) and never quite recovered from the shock, so he's had a custom-made doll fashioned after her. Now he lives in an unhealthy fantasy world where the doll speaks to him, he speaks to it and the two can continue on their marriage. Elena even comes with pre-recorded cassette tapes he can put into a player built onto her back to make her speak when he takes her for car rides. Because Elena has to spend all her time inside, Martin imports another doll in; her "sister" Paula, to keep her company. He carries on the charade at the workplace, but it's about to be exposed by his new neighbors. Lina (Carmen Sevilla) has just moved in next door and is of, shall we say, loose moral character. She spends her nights drunk at the bar where she works (and sometimes prostitutes herself) and much of her free time tending to a tumultuous relationship with her bisexual, abusive pimp / con artist boyfriend Mauro (Máximo Valverde). Caught up in all that mess is Lina's lonely young daughter Cati (Lolita Merino), who is usually sent outside to play by herself. Cati starts snooping around Martin's home, manages to get inside and discovers the doll. Martin tells her that he'll buy her a gift if she keeps this a secret. She doesn't.

After Lina catches Mauro and her (male) boss getting cozy, she slaps them and gets herself fired. Now desperate for money and a place to stay, she finds out about Elena at just the right time and decides to use the information to blackmail Martin. Since he's alone and she's now alone, she wants to move in to his place and have access to his money. In exchange, she'll do all of the wifely cleaning and cooking duties and impersonate "Elena" for public appearances so his co-workers don't get suspicious. Martin doesn't want them there and tries to pay her off but she refuses and he feels he has no other choice but to cave in to her demands. After all, his career will be ruined if his wife's true identity gets out and that's just what Lina threatens to do if he doesn't go along with the arrangement she's proposed. Lina and Cati move in, but the little girl is forbidden to go upstairs where Martin keeps his dolls. It isn't long before the new house guest starts crossing the established boundaries. Mauro manages to weasel himself back in to her life (and Martin's home) and Lina destroys Paula and then demands he get rid of Elena. It's all just a little too much for the already very unstable man to handle.

This fascinating, seldom-watched psycho-drama certainly deserves a better fate than the utter obscurity it's fallen into. It's well-made, well-written by José Luis Garci, has an eerie score courtesy of Alfonso Santisteban and some wonderfully stylish moments and takes the subject matter very seriously; throwing in a little welcome black humor along the way. There are definite shades of Psycho here, with the doll solemnly sitting behind a sheer curtain in an upstairs bedroom window and the fact Martin carries on conversations with it, but this saves its shocks for the very end and slowly builds to them. Perhaps best of all, this boasts a truly excellent central performance from Vázquez as the lonely, disturbed, friendless man who's clearly lost the ability to be in normal relationships with real human beings. The character is certainly bizarre and creepy, but the actor manages to make sure we sympathize with him regardless. By the end of the film, we pretty much want his unwanted house guests to just get out and leave him alone. Sevilla is also great in her (very unlikable) role. One wants to feel sorry for her character; being a single mother who's fallen on hard times and all, but it's made pretty clear that she's an inept, self-centered woman and mother who hardly has her daughter's best interests in mind. Little Cati would probably have a better chance in life with her out of the picture.

According to IMDb, this was also released in Greece (as Kourdisti koukla gia ores monaxias) and Italy (as Il chiodo nel cervello = "The Nail in the Brain") in addition to Spain, but not here in America. The version I watched, which is available online, was in Spanish with fan-made English subs. I recommend it.