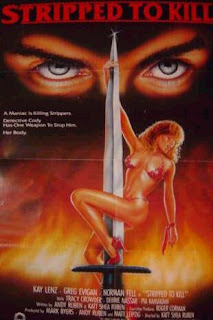 Directed by:
Katt Shea
What happens when you hire a competent female writer/director to make a low-budget T&A horror-thriller with a strip club setting? You get compromise, and a kind of tug-of-war effect between exploitation and realism. While this one has a more-than-generous amount of T&A and violence, it should also be given credit for delivering a gritty, credible and often unflattering look inside a strip club and the women who populate it. The dancing is explored for all its worth and from all possible angles; exploitation, entertainment, eroticism, even as art. Some of the dancers view their occupation as being a way to express themselves through dance while others think of it as just a paycheck for another night's work. A few are lesbians, some have drug problems, most have criminal records and a few even seem like reasonably well-adjusted women who just happen to find stripping unpredictable and exciting. The club itself is so atmospherically represented that you can almost smell the cigarette smoke in the hallways. The door of the girl's dressing room, the congregation place where the girls change into their costumes, bitch about customers, reflect on their lives and pasts, etc., has "Women" scratched out and "Sluts" amusingly spray-painted over it. Much of the dialogue between them is laced with cynicism, no doubt based on a life's worth of problems, failures and disappointments. All of the girls are given just enough personality to be likable and what seems seedy at first eventually turns into a somewhat accommodating place for outcasts of all types once the heroine of this film gains employment as one of the dancers.
.
The heroine is question is a reserved tomboy policewoman played by Kay Lenz, who goes undercover at the club when a serial killer begins targeting the strippers. Sure, we've seen this exact same plot many times before (at least I have), but this movie takes it a step further. Not only is Lenz trying to crack the case but her character is learning and opening up in the process. This assignment allows her an outlet from the male dominated police force and the opportunity to explore her femininity and sexuality. She also discovers an odd kinship and inner working between the women and gets a little too involved on a personal level. It's an interesting role and Lenz (a sorely overlooked actress over the years) is great in it. And yeah, she does several nude scenes and looks great doing so, but it's a thoughtful, very good performance that doesn't rely on her nude scenes to be memorable. Norman Fell also has a great supporting role as the no-nonsense club owner, who's every bit as dry, cynical and world-weary as his girls.
.
The biggest gripe I see about this film is that there are too many dance scenes and they're too long. This is no doubt just filling executive producer Roger Corman's quotient of T&A for direct-to-video profit. Well fine, we get the naked girls and get the stripping. Plenty of each. What I don't see usually pointed out is that the dance scenes themselves are entertaining. They usually incorporate some interesting props (motorcycles, fire, a giant spider web...) or have a specific theme and with the lighting mixed in, it does come off as performance art at times. In addition, you can tell the women hired in these roles are actually either professionally trained dancers or actual strippers (or ex-strippers) because their stage performances incorporate flips, splits and a flexibility that requires dance training. The soundtrack is full of dated 80s-style rock, usually with a female vocalist, but it's tolerable. The biggest problem I had with the film is that the slasher movie plot seems almost an unnecessary afterthought. I was far more interested in the everything else that was going on that I almost lost complete interest in who was actually killing the strippers.
.
Without question, Katt Shea is one of the most talented writer-directors Corman employed in the 80s and 90s. She was one of the few with the ability to transcend the formulaic material and anemic budgets to create films that are distinctive, thoughtful, personal and interesting. And like many other notable cult/underground directors, she has never, and may never, receive much recognition or attention, and that's a true shame. I especially recommend her films DANCE OF THE DAMNED (1988; an intriguing and original vampire film which has sadly slipped into obscurity over the years) and STREETS (1990; a grim drama/thriller starring Christina Applegate as a teenage prostitute hunted by a serial killer). While STRIPPED TO KILL might not be as impressive as the aforementioned films, and a bit more weighted down and padded out, it's still a bright starting point for the director and well worth checking out.
.
Also with Greg Evigan as Lenz's chauvenist partner/love interest, Diana Bellamy and Debra Lamb (who also appeared in the 1989 sequel - STRIPPED TO KILL II: LIVE GIRLS).
★★★
Posted by The Bloody Pit of Horror at 2:34 AM

LADYKILLERS (1988), a gender-swapped STRIPPED TO KILL made for TV. with marilu henner, susan blakely & lesley-anne down.

Best copy I could find of this on Youtube, which still isn't very good quality but watchable. Leaving this right here so I remember to get back to this eventually.

LADYKILLERS has weird music: aside from M/A/R/R/S' "pump up the volume" the strip club soundtrack is all (presumably license free) cover versions. "beds are burning", midnight oil's aboriginal protest song seems... somewhat out of place there.

Welp you've just successfully convinced me to finally watch it.

there's an early scene where one of the dancers sings living color's "glamour boys" in the shower, a band/song i haven't thought about in like 30 years. later, it plays during his set.