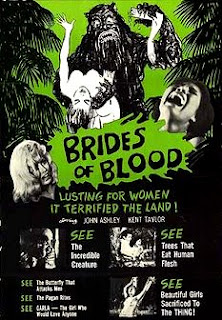 ...aka: Brides of Blood Island
...aka: Brides of Death
...aka: Brides of the Beast
...aka: Danger on Tiki Island
...aka: Island of the Living Horror
...aka: Terror on Blood Island
Directed by:
Gerardo de Leon
Eddie Romero
BRIDES OF BLOOD was the first of three sex 'n' violence shockers (aptly referred to as the "Blood Island" trilogy) that were shot on location in the Philippines and distributed by low-grade specialists Hemisphere Pictures. Stuffy scientist Dr. Paul Henderson (Kent Taylor) is headed toward Blood Island to do some research on the effects Atomic bomb blasts in the vicinity have had on local vegetation, wildlife and humans. Accompanying him are his neglected and slutty (to put it mildly) platinum blonde wife Carla (Beverly Hills) and Jim Farrell (John Ashley), a good-natured, baby-faced Peace Corps officer who wants to help the island dwellers improve their village. "Maybe I can help keep them happy?" ponders Carla about her purpose aboard the ship, before she sneaks off to have a close encounter with one of the crewman. The ship's captain (Oscar Keesee) tries to warn them not to get involved, but they shrug off his warning, get dropped off and are immediately treated to the sight of natives disposing of dismembered body parts.
A man named Arcadio (Antonio Centenera) also informs them they never should have came and warns them that he and his fellow villagers have regressed to their primitive ways. Arcadio's English-speaking granddaughter Alla (Eva Darren) seems a little bit down in the dumps - possibly because she's been promised up as a virgin sacrifice to something or other. We'll get to that here in a little bit. Not yet discouraged by ample warnings they should high tail it out of there, our trio will go on to encounter radiation-colored sunsets, living-killing mutant banana plants (!), mutant butterfly (!) attacks, cult rituals where the natives go "la la, la la la la" over and over again and other island horrors. Up the ways from the village lives Esteban Powers (Mario Montenegro), a wealthy playboy who has a mansion, an army of dwarf servants and a whip-wielding henchman named Goro (Bruno Punzalan). Esteban (who suffers from nightly migrains) lets Dr. Henderson and company stay at his secure home, which proves to be anything but secure once Esteban's true colors are revelead. Yep, he's a charismatic charmer during the day, but by night he transforms into a grotesque, lusty, radioactive mutant (referred to as "the evil one" by the villagers) that likes to "satisfy himself" by ravaging uncredited naked young Filipino beauties at night.
There's terribly stiff acting from at least two of the three leads (with a weird post-dub sound to the dialogue recordings), plus awful dialogue, a plotline jam packed with assorted nonsense and some bewilderingly cheesy effects. Just wait until you get a look at "the evil one!" The whole film is very colorfully shot, with lots of bold lighting choices, such as blue and pink smoke for the sacrifice scenes. It also features some very good sets and props, as well as more gore and nudity than most horrors of its day. In short; it's an awful movie that looks pretty good and thanks to the busy plot, exploitation elements and overall air of silliness, I can almost guarantee schlock fans are gonna enjoy this one.
Mr. Taylor had been a popular B-level star in the 30s and 40s, who at this stage in his career was having a hard time finding "respectable" work. This would be his only venture into Filipino horror, though afterward he'd earn his Z-movie credentials by appearing in half a dozen Al Adamson films. He retired from acting in the mid 70s and passed away in 1987. Ashley had also been a popular matinee idol type, who'd had some success in America as the star of juvenile delinquent flicks and the Beach Party pictures, before being forced into Z grade pictures. Unlike Taylor, however, he would stick around in the Philippines and star (and sometimes produce) ten additional films; most of which fell into the horror genre. With that behind him, Ashley returned to America and became a modestly successful TV producer (The A-Team series being his best known credit). He passed away in 1997. Leading lady Beverly Hills was a former stripper who had some steady film and TV work throughout the 60s and 70s. She made her debut in an episode of Boris Karloff's Thriller, and also appeared in the underrated George Pal production THE POWER (1968) and the B-classic INVASION OF THE BEE GIRLS (1973); using her real name Beverly Powers for the latter. She retired from show biz at the beginning of the 80s, moved to Hawaii and became a minister!
.
The two other "Blood Island" pictures were THE MAD DOCTOR OF BLOOD ISLAND (1968) and BEAST OF BLOOD (1970). Both starred Ashley.
.
★1/2 SBIG (to an extent)
Posted by The Bloody Pit of Horror at 5:14 AM

I remember seeing this on late night TV in the late '70's! I never saw an un-cut version. Guess I'm not missing anything.