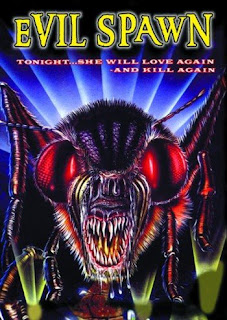 ...aka: Alien Within, The
...aka: Alive by Night
...aka: Deadly Sting
...aka: Metamorphosis
Directed by:
Kenneth J. Hall
Ted Newsom (new footage)
Fred Olen Ray (uncredited)
A mindlessly entertaining, often hilarious play on THE WASP WOMAN (1960). Bitchy, aging actress Lynn Roman's (Bobbie Bresee) career isn't what it used to be. All the choice roles are going to ladies in their 20s and the only offers rolling in to Lynn's agent Harry ("Jerry Fox" aka Fox Harris) are in B-grade schlock... just like this film! But everything's about to change when scientist's assistant - and closet obsessed fan - Evelyn Avery ("Donna Shock" aka Dawn Wildsmith) comes to her patio with a special serum devised by Dr. Emil Zeitman (John Carradine) that promises to restore her youth and beauty. Reluctant, Lynn shrugs off the offer, but Evelyn leaves a sample at her home anyway just in case. Lynn breaks down, starts injecting the stuff and finds herself looking and feeling years younger. Well, if you discount the part where her eyes glow red and she blacks out, pukes up white foam, grows a set of oversized plastic fangs and morphs into a killer insectoid monster that goes after those she feels have betrayed her, including her sexpot personal secretary (Pamela Gilbert) and her unfaithful gigolo boyfriend (John Terrence). Drew Godderis (BLOOD DINER) co-stars as Ross, Lynn's friend and biographer, who narrates the film a la SUNSET BOULEVARD and Forrest J. Ackerman can be seen cleaning out a pool.
.
While far from good in the traditional sense, I still quite enjoyed EVIL SPAWN. It's highly entertaining and well-paced, many of the main actors (especially Bresee, Harris and Wildsmith) perform with gusto, there's some amusing dialogue, plenty of nudity, a hilarious dance sequence, a mock awards nightmare sequence where Lynn receives an Oscar (!) before turning into the bug monster and lots of supremely cheesy Z-grade special effects to sink your teeth into. It's precisely what one of these things should be; good, brainless late night fun.
.
The footage of Carradine (looking distressingly ill) and Wildsmith interacting was intentionally generic footage shot a year earlier by producer Fred Olen Ray for use in future productions. The rest was done by Kenneth J. Hall; much of which was filmed at Bresee's actual home. There's also a very rare alternate version of the film titled THE ALIEN WITHIN which was released to video in 1991 by a company called MNTEX Entertainment. It contains 35 minutes of brand new footage shot on video by Ted Newsom and starring Jay Richardson, Suzanne Ager, Richard Harrison, Melissa Moore and Gordon Mitchell. I own that tape and will be doing a separate review for it eventually.
★★ SBIG
Posted by The Bloody Pit of Horror at 4:35 AM

Are you still planning to write a review of the Alien Within version? I'm really interested in your opinion about it.

Apparently that version is coming to dvd in November, and I wonder if it'd be worth buying - or should I just go with the cheaper Evil Spawn dvd that's been out there for a while.

Yep, I'm planning on writing that up here sometime... and I probably better get on it before the DVD comes out. I have the rare VHS (on the MNTEX label), but I can say right now that I much prefer the original version of Evil Spawn to the Alien Within version.

Thanks for the answer! Looking forward to your take on it.

Love your blog, by the way! I especially enjoy the reviews of super-obscure stuff you've managed to dig up. There's lot of information here that can't be found anywhere else on the 'net.

Keep up the great work!

Thanks a lot. I appreciate it! Now I need to dig my box of VHS out of the closet and dust off my VCR...