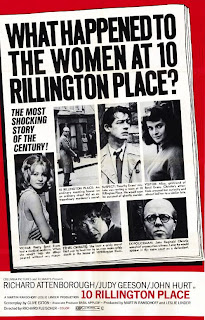 Directed by:
Richard Fleischer
Richard Attenborough is bald, bespeckled John Reginald Christie, a real-life serial killer who ran a boardinghouse, drugged, raped and murdered eight female boarders in 1940s England and buried the bodies in his yard. John Hurt is Timothy Evans, a male boarder who is blamed and wrongfully hanged for one of the murders, an event that led to the abolishment of the death penalty in England. The atmosphere is grim, the period details are good and the acting is excellent. Director Fleischer made at least three other movies about real-life murder cases; THE GIRL IN THE RED VELVET SWING (1955), COMPULSION (1959) and THE BOSTON STRANGLER (1968).
★★★1/2
Posted by The Bloody Pit of Horror at 6:11 AM